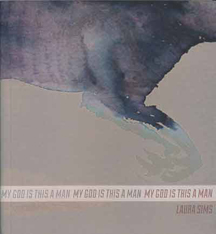 What is not written is just as critical as what is on the page in Laura Sims’s My god is this a man. This book is a mash-up, containing the poet’s voice but also intruding voices, some of which we can tell (as when she quotes various murderers, or the more obvious black text boxes that contain language from the surviving Boston Bomber juxtaposed with a relaxation tape) and some of which we can only surmise.

As an object, the book is square and grey with a watercolor of a creature running on the cover—the torso resembles the quick beauty of many four-legged creatures, perhaps a horse or a dog, and the legs are drawn down into curled claws as if the feet of a dead bird. We have not even opened the book yet and already we are presented with an image that is oppositional, life force and death at once.

With one quick spin of the pages, we also see the reading experience will not be typical. In many senses, it invites a dipping-into kind of reading—the more traditional front-to-back reading won’t grant a firm narrative arc. Each page might offer a smattering of words, or words within a box outline, or white words in a black box, or something else entirely. What we do know, as we read, is that expectations are meant to be shifted.

The box frame calls to mind many things: a pane of glass, a television or computer screen, a territorial border. The first two appear side-by-side, with one stating “I am here” and the second “I have always / been here.” The two boxes gaze back at the reader as if a pair of eyes; one cannot help but think of a figure lurking at the window. There is another pane-poem that states, “The hordes / of the curious,” which aligns the concept of the viewer and the viewed, the voyeur and the subject.

Sims employs changing fonts and font sizes in an elegant manner to convey meaning. One page simply states, “I lied her on the floor,” the usage allowing for layered meaning, and the following page, knowing the reader must be stunned, enlarges the message—“I said, ‘I lied her on the floor’”—as if commanding, Did you read me? React!

Line breaks are critical to the dual meaning Sims operates with in her collection. There is the page that reads

and she
became
a woman
being
done to

Without a standard grammatical guide, we are left running our eyes up and down the page, chunking phrases to create and recreate meaning. Another pane-sequence reads “I called him myself” then “TRUST” and one turns the page to “had been / hammered / out of me.” The center of the book exists as a jumbling of quotations from the killers whose diaries and letters the poet consulted, and still another moment contains the line, “I had a head, but I lost it,” which begs the question: what sort of head? And whose?

We are greatly aware of space within the text—of what is used and left empty. Towards the closing, Sims writes, “The State unearthed a tiny // wooden door.” With all of the falling, all of the textual movement, one might think of Alice and the rabbit hole. A few pages later, Sims gives us a visual with a repeating field and “a body” resting neatly in one hole. This reimaging of writing and re-reading allows the reader to interrogate the text with a swath of white space, a silence with purpose.