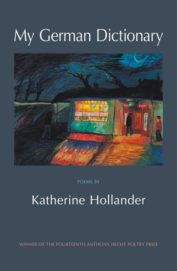 A book of poetry can sometimes function as a time machine, and that’s what happens with My German Dictionary. “I couldn’t be / a good historian,” Hollander confesses in the opening poem, “Confession (Invitation),” “so I wrote poems.” These poems take us to Europe in the years between the two world wars, the landscape of Osip Mandelstam, Rosa Luxemburg, and Kathe Kollwitz. Over and over, the author turns her imagination loose on history.

To write historical poems, a writer must do much research, but that alone won’t bring a poem alive—the language must drive the poem, and the reader must feel transported. This happens constantly with these poems. In “General Strike, Berlin, 1920,” for example, we see a family brought to a standstill by the titular event:

at the stove, one burner on,
a blue water lily of light.
In the pot, the stew is rich
and black. The man sits at the table

his hands open like gray gloves.
The girl lifts a dish and light
licks the edge like a tongue of oil.
She passes the dish to her mother.

The woman fills it with the dark stew.
The man lifts his spoon like a beacon.

The scene feels like something out of a painting or a folk tale, yet it’s grounded in a specific moment of history. The mix of beauty and tragedy keeps the reader transfixed. Though nothing extraordinary happens, we feel it could at any moment.

Hollander’s book closes with a section of poems drawing inspiration from German words. This could easily become an intellectual exercise, but that rarely happens here. In “Das Wörterbuch,” for example, a poem on the word “dictionary” reads like a biography. An anonymous “he” “climbed inside the horn / of a phonograph. It was deafening, / and three times a day the leader’s voice / washed over him, like acid.” It sounds like a folk tale, magical and dangerous.

The only poem that breaks the spell of this book is “Dear Union,” a work mourning the death of the European Union. Opening with an epigraph by Marine LePen, who called the E.U. a “monster,” the author’s anger is certainly justified. Yet the poem often veers into sentimentality: “I want to touch down, like days of old, / board the beloved Tegel bus / and careen into your goodness.” This is the rare misstep, however, in a volume that much deserves the Anthony Hecht Poetry Prize it was awarded.

The closing words to this resonant book are “Take my hand. Let’s go.” For many readers, the only place to go is back into the magical world of My German Dictionary.