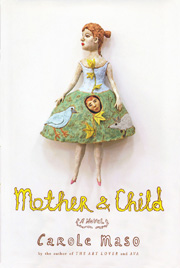 Carole Maso’s work to date has been characterized by a lush, almost otherworldy writing, a style in which the reader experiences everything more deeply—the beauty of the world as well as heartbreak and longing. On top of this, her writing constantly folds back on itself. Maso’s work often goes off into what seem to be tangents, yet as soon as you go with her down a path, she will lead you (sometimes gently, sometimes forcefully) back to the previous idea, braiding stories together.

While still stylistically a triumph, Maso’s latest book is grounded in our political and historical moment; rarely has the author used as many current references as in Mother and Child. This book deals with a number of entangled themes, including issues surrounding rites of passage, as well as the process of letting go of your children and of your own childhood. But tied up with those themes are also references to September 11th, the Iraq and Afghanistan Wars, the devastating tsunami in Indonesia, and more. How does one hang on to own hope and innocence?

The mother did not know why everything had to change—she just knew that it did. Things were changing even though they seemed not to be, and they would continue to change now at a faster and faster rate.

This is a world familiar to us, a world in which men and boys are spoken of as “disappearing.” We know what is happening to them and yet, somehow, we do not. One day they are here and the next day, they are gone. In the natural world, the bees are also disappearing and the frogs are losing their songs; the polar ice caps are melting and the ever-present threat of extinction looms large. It is the Time of the Funnels, when the Vortex Man rules. The world feels downright apocalyptic:

Inert objects were quietly being transformed into talismans of obtuse meaning and beauty . . . Liquid glass and steel beams from the fallen towers were being fused into safety walls and fallout shelters . . . A pocket watch, a tattoo, a love letter, a birth certificate, a passport were all playing their parts. The everyday dreamers were reviving and reanimating the scene. Meanwhile, as they sat cataloguing the inhabitants, an ominous announcement was made over the loudspeakers. A quarantine had been placed on the Valley. No one was to leave the attic.
The influenza had arrived.
Outside, birds dropped from the sky.

With these things setting the backdrop for a seeming end-of-days tale, which corresponds with the girl’s coming of age, Maso suggests that magic and mythology provide a counterpoint. She brings together biblical language and archetypal imagery, knowing how the power of myth can both frighten and sustain us. Even the most ordinary things are spoken of as if they are transformed:

Paraded before them was all of life. Enigmatic emblems streamed past as the mother and child walked, but they were not afraid. In the place called the Night Archive, Inventory of some kind was being taken, and things were being summed up, accounted for, tallied. Piled to the ceilings were logbooks and ledgers and bibles: the Hair Bible, the Bird Atlas, the Red Book of Existence.

Likewise, many of the characters become archetypes, includig the eponymous mother and child, the child’s North Pole Grandmother, her friend, the Girl with the Matted Hair, and the ever-present Virgin in her blue wrap, gently calling to the mother and child and patiently waiting for them to come to her. This is a story told from a mother’s point of view, and replete with classic mother figures:

The more mindful mother got the less mindful mother to thinking of Other Mothers and Mother Substitutes and As-If Mothers, ones who might guide the child through fraught terrain. An As-If Mother would come in handy too, in the event something ever happened to this one.

The mother, like all archetypal mothers, takes in everything around her, including war and church scandals and all the things that threaten childhood and innocence, whipping us back into our present reality:

The Pope appears again on the tarmac of Andrews Air Force Base and is met by the War Crimes President. They are accompanied by the millions of children they have put in harm’s way, both grown and ungrown, both alive and dead, and also the many who are somewhere between the two.

In this back-and-forth, the mother finds herself struggling to balance her own pessimism and fear toward the world with the need to protect the child and the child’s sense of wonder and possibility:

She walked to the child’s room and smoothed her hair and pushed a few tendrils away from her face. That night, sitting there on the child’s bed, she vowed that come spring, she would do whatever it took to keep the child safe.

With that innocence and optimism, there manages to be a measure of hope in everything, but it is a hope tempered with the knowledge that things could turn at any moment, that things can still go horribly wrong. This is the ambivalence of our time, and Maso captures it perfectly, in a way that reminds us of our fragility as a species, and also of our imaginative power to put things right. In the end, there is no answer, but there is still hope. As the author puts it, “It was enough to be adorned in the charms of twilight. It was enough to be alive.”