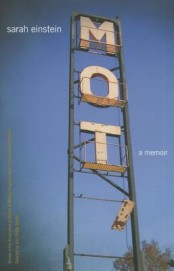 Chosen by John Phillip Santos as the winner of this year’s AWP Award in Creative Nonfiction, Sarah Einstein’s Mot, A Memoir is a breathtakingly beautiful read. In this unique story of friendship, Einstein drives from her home in West Virginia to Texas to spend a week at a KOA “kampground” with her homeless friend Mot. The week will be an upgrade for Mot, who lives out of his car, but the KOA cabin will heighten his considerable anxieties (for example, Mot’s voices tell the pair where they can and cannot eat). Still, a week spent in a sanitized camping ground is also a much-needed break for Einstein, from her job and from her husband Scotti. While Scotti shares Einstein’s commitment to social justice, he’s taken his dedication too far, allowing a desperate woman named Rita to overwhelm his marriage.

Einstein is a kind, compassionate friend, whose understanding stretches convention. Mot doesn’t seem to need her in the same way she needs him, though we assume he does. Einstein reports that

A week of magical thinking has reshaped me into someone who finds augury in the black smoke.
Mot’s mental illness infuses everything with meaning. I’ve spent a week immersed in the unreal. It takes work to pull myself back into the world of simple cause and effect.

By living on the road, and on the edges of society, Mot uses perpetual movement to keep his inner voices in check. His story as a vet is desperately sad, but he is not a pathetic man.

The finely crafted narrative backdrop to Einstein’s and Mot’s friendship is Einstein’s marriage to Scotti. Scotti helps Rita, who is emotionally abusive, and Einstein helps Mot, who ultimately disappears (as he warned would happen). The marriage is a quartet of dysfunction. It’s clear this arrangement no longer works, if it ever did.

Einstein’s story of individuation propels the narrative forward. Having burned out helping others, she now acknowledges that she has subsumed herself through her almost obsessive need to be of service. Her dedication is worthy, but it makes it impossible for her to be a whole person.

Einstein makes another trip to see Mot—this time to a KOA east of Oklahoma City. Mot’s car breaks down, so Einstein brings him home with her to West Virginia, offering yet more help. Einstein is the kind of friend we would all do well to emulate. Mot’s car is left behind like road kill, but not Mot. On the drive home, Einstein reflects:

Two days of nothing to do but converse have left me without a single untold story or crackpot theory left to fill the silence. Mot, too, has grown quiet, although whether he is out of material or fretting over what to do is impossible to know. It’s Sunday. He turns the radio to NPR so we can let Garrison Keillor and Michael Feldman do the talking for us.
Mot says that he often goes months without anyone to talk to and that during those times the people on NPR are as close as he comes to having friends.

Sarah Einstein is a brave, compassionate writer, and in Mot, A Memoir, she honors a beautiful, honest friendship.