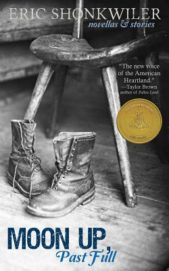 Eric Shonkwiler’s debut collection Moon Up, Past Full takes up the harsh beauty of the midwest and the gentle misery of its rural working class in a series of stories exploring family, drug and alcohol abuse, violence, and the mere struggle to survive. Occasionally these stories slip into the clichés of the burgeoning rural noir genre, but what distinguishes the collection as a whole is Shonkwiler’s strong narrative sense, his patience in developing the internal tension of his characters, and the roughhewn grace of his prose.

In these fourteen stories, including two pieces of flash fiction and one novella, Shonkwiler begins with simple set-ups for his characters, then tugs at the strings that hold their worlds together until each man or woman is ready to break apart or fight to survive. Often they do both. The slow fuse burning through each story slowly ratchets up the anxiety and tension at the core; Shonkwiler is much less concerned with the outbursts of violence that often define fiction of this type than he is with the fragile strength at the heart of his weatherworn protagonists.

In “Last Snow” a mother takes her young daughter to a state park on a mountain to witness what might be the first and last snow the child ever sees. The story is set a few years into a future when global warming has taken this beauty away from us, and the mother doesn’t want her girl to miss it. The quiet poignancy of the story comes from its whispered specificity; there is no politicizing, and this imagined future is not overrun with zombies or global famine or war. The simple loss of the seasons is enough.

Shonkwiler does give us that darker future, however, in “GO21,” the longest story in the book. An asteroid has hit the earth, and all forms of broadcasting, including cell phones, have been knocked out; the ensuing tale of a small group of adults trying to get to and defend a remote cabin starts out quietly and builds to a terrific crescendo. The story’s genius lies in its subversive ending, which of course can’t be revealed here—suffice it to say this is not the story you think it is.

“Rene” tells the story of a young woman trying to find help for her mother, who has had a bad nosebleed for days. The hospital is useless in helping her; the rumored witch that lives by a river many miles away might not be. Their truck has given up the ghost, so they set out on horseback. Along the way Rene comes to grips with the burdens her mother has laid on her since childhood.

There is a recurring theme in these stories of adult children facing up to the human failures and relational wounds of their parents. Shonkwiler’s characters are often fractured from their families, struggling with loyalty to their parents and siblings while defending their own identities and ethics. This coping with the frequent failure of the endeavor of family is a central and defining characteristic of his writing.

Moon Up, Past Full is a promising debut from Ohio native Shonkwiler. It’s refreshing to read stories like these that aren’t set in the West or the Ozarks or some other well-worn territory of rural noir, but in the heartland states of Ohio and its neighbors. We have stories around here you wouldn’t believe, so Shonkwiler isn’t likely to run out of muses any time soon.