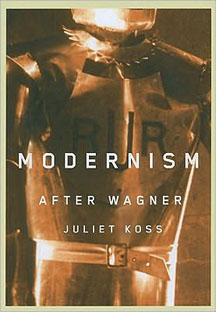 In 1849, fired by the ideals of the democratic revolutions that erupted across the European continent, composer Richard Wagner devised what history would regard as his signature contribution to aesthetic theory: the Gesamtkunstwerk, or total artwork. Juliet Koss tells us in her new study, Modernism After Wagner, that the composer at the time affiliated his ideals with those of radical leftist thinkers like Feuerbach, Bakunin, and Proudhon. Consequently, his theory of an artwork that would unite poetry, music, and dance in a single and singular experience also advocated the union of spectator with spectacle and of audience members with each other. As “a utopian socialist strongly interested in contemporary anarchism,” Wagner wished to create through the power of his musical dramas a new German people, joined in shared affective experience and oriented toward a democratic future. Wagner’s avowed inspiration in this radical project was the tragic theater of ancient Athens—an artistic and political institution that brought the members of the polis together in a purgative and communal ritual, making Greek culture the coherent but incipiently democratic force that Wagner perceived it to be. Thus, the composer-theorist looked to the past even as he theorized an art of the future: his ideals, writes Koss, were “simultaneously revolutionary and conservative.”

Koss’s book is very much an attempt to clear away the misconceptions about Wagner and his most influential idea. As her final chapter makes clear, the story of the Gesamtkunstwerk I have outlined in the preceding paragraph is not the story that has been told to subsequent generations. Wagner himself clouded his own legacy by turning against his early utopian ideals to embrace a more conservative aesthetic later in life. Then, after his death, his widow and followers were only too eager to channel his posthumous reputation toward emerging fascism. Following World War II, Wagner was regarded, writes Koss, as “the composer who provided the soundtrack…for National Socialism in Germany,” and no part of Wagner’s art seemed more fascistic than the Gesamtkunstwerk. After all, wasn’t the total artwork a totalitarian attempt to swamp the individual in a group hypnosis, just as Hitler had done to the masses?

Modernism After Wagner decisively answers in the negative. After a first chapter in which she outlines the emancipatory dimension of Wagner’s initial Gesamtkunstwerk theory, Koss surveys the journey of the total artwork from the composer’s 1870s theater-building project in Bayreuth to the Bauhaus movement’s robot-theater experiments during the Weimar Republic. Along the way, she provides a genealogy of German aesthetic theories that emphasized the audience’s empathy toward the spectacle they witnessed, showing that spectators’ willingness to lose themselves in a performance does not necessarily imply their docility before authority or a collapse of their critical faculties. Moreover, the influence of Wagner’s theatrical innovations on the development of cinema and the reform of German theater allow Koss to emphasize the Gesamtkunstwerk’s nascent modernity. Wagner-influenced theories of spectatorship and theatrical transformation had an ability to respond to the turn-of-the-century’s expansion of the middle class. As “the spectator” of aesthetic theory could no longer be assumed to look like the propertied male that earlier artists and thinkers had taken for granted, the notion of a popular theater for the whole nation proved fruitful in imagining modern art.

But the genealogy of the Gesamtkunstwerk is not the only drama of Modernism After Wagner. Koss’s patient study, made up of lucid, detailed chapters about the history of theater reform, art theory, cinema, and avant-garde experimentation, builds up to a final essay that ties the disparate materials of the book together in a rejection of previous scholarship on Wagner and his influence. With thrilling prosecutorial zeal, Koss singles out the eminent 20th-century philosopher most responsible for Wagner’s tarnished reputation, Theodor W. Adorno, and demonstrates that his analysis of the composer’s music and theories is ahistorical, tendentious, and misleading. Adorno insisted—not without reason, given the German right-wing’s championing of Wagner and his work—that fascism had its roots in Wagner’s total theater, and with what Adorno regarded as its encouragement of stupefied audience submission. Koss persuasively argues that Adorno’s conflation of the Gesamtkunstwerk with Nazi spectacle “also conflates the active model of communal spectatorship that the composer demanded in 1849 and the passive spectatorship required of a mass audience under German fascism.”

In her restoration of historical context to Wagner’s Gesamtkunstwerk, Koss represents a scholarly generation impatient with the grand theorizing that characterized the academic humanities at the end of the twentieth century. Adorno’s revisionist Marxist critical theory, along with psychoanalysis and the post-structuralism of Michel Foucault and Jacques Derrida, sponsored inquiries into culture that often led to vast claims about politics, history, language, and subjectivity. Increasingly, humanities scholars have retreated from such theorizing in an attempt to provide detailed historical contexts for the cultural artifacts they analyze. Koss’s illuminating restoration of the 1848 revolution and its utopian horizon to Wagner’s aesthetic philosophy exemplifies this approach at its best, imbuing careful research with an empathetic historical imagination to tell readers something they don’t already know.

Modernism After Wagner, however, occasionally makes one nostalgic for the broodingly focused passion of Adorno’s world-historical judgments. For instance, Koss convincingly tries to exonerate Wagner’s early concept of the Gesamtkunstwerk from the charge of proto-fascism. But she does not seem to realize that the composer’s theoretical marriage of backward-looking conservatism to revolutionary utopianism does indeed seem to anticipate some features of the Nazis’ right-wing radicalism, with their unholy alliance of ultramodern mechanization to neo-pagan reveries. Koss’s insistence on contextualization can also sometimes work against her own thesis. She wants to celebrate Wagner’s visionary attempt to create an art of the future, but if artworks have their real life in the immediate circumstances of their creation and reception, is it not futile for any artist to attempt a Wagnerian project to shape the future? A utopia totally bound to its own era is truly a no-place, at least as far as the rest of us are concerned. While the present generation of humanities scholars has done the hard and necessary work of rediscovering history’s complexities, Modernism After Wagner suggests that the next generation’s task may be to think beyond history’s determinations—to rethink the universal.