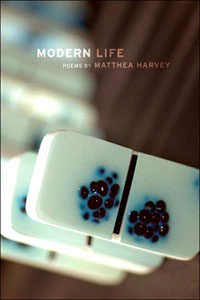 Given the imaginative titles of Matthea Harvey’s two previous collections of poetry, Pity the Bathtub Its Forced Embrace of the Human Form and Sad Little Breathing Machine, her new book’s title, Modern Life, seems to signal a dry urgency. Both earlier titles delight through their use of antithesis, overt and covert; both ask us to sympathize with objects, to consider their point of view; both seek to disrupt the division between human and nonhuman, and between the humorous and the pathetic. Yet perhaps all of that tense conflict between the mechanical and human, as well as the blurred distinction between them, is still present in the phrase “Modern Life.” The book’s cover art, created by Harvey herself, seems to support this reading; it features digitally-altered photographs of dominoes lined up and ready to fall, their dots oddly made to look like blackberries or clusters of eggs—something life-like, at any rate, but also mathematical: division and fractions suggested by the heavy black line that separates the dominoes’ two halves. It’s an image that simultaneously evokes duality, the numerical, and life’s fragility; so much depends on the dominoes remaining upright.

Like the cover photo, Harvey’s surprising, intelligent, and mysterious poetry spurns the personal and turns often to the pun, to the non sequitur, and to mathematical double-meanings. Aside from its title, which appears to break from its whimsical predecessors, Modern Life differs from these earlier works in several other significant ways, most noticeably the nature of their humor: although Harvey still can’t resist a pun, the poems’ jokes are more self-conscious, as befits a book whose subject is ultimately the current political landscape and its violence—or, perhaps more accurately, the cultural violence that engenders the political. Another notable shift is in the balance between prose and poetry; whereas the majority of pieces in Sad Little Breathing Machine are lineated (and sometimes in two columns), prose poems predominate in Modern Life. Also different is the amount of “speculative” poetry—poetry that is not merely surreal, but incorporates the conventions and subject matter of fantasy and science fiction. Her sequences “The Future of Terror” and “Terror of the Future” create a dystopian world whose main characters describe, somewhat-matter-of-factly, the brutality of an apocalyptic, post-disaster future which ends in the isolation of each sequence’s narrator.

Unchanged is the way Harvey explores the blurry borders of the human versus nonhuman throughout Modern Life, mobilizing a range of fascinating and far-fetched characters to do so: the sentient parrots of “The Empty Pet Factory,” the word-creatures of “Word Park,” the gentle Frankenstein hero of the fascinating Robo-Boy series, the centaur of the prose poem “You Know This Too,” which explores in a half-humorous, half-serious way the plight of the half-man, half-horse. Half poetry, half fiction, the piece begins inside the centaur’s thoughts, which naturally turn toward division: “The bird on the gate and the goat nosing the grass below make a funny little fraction, thinks the centaur. He wonders if this thought is more human than horse, more poetry than prose.” The remainder of the poem includes an explication of the centaur’s plight, a river so filled with merfolk that “there’s no room for fish,” griffins celebrating the Berlin Wall, and the centaur’s doodle of “a girl in sequins getting sawed in half.” Besides being crammed with images of the divided and the fused, the poem asks us to consider how things crowd each other out, a process that leads to destruction and violence, so that what begins comically with the “funny little fraction,” ends disturbingly.

The title poem, “Implications for Modern Life,” is another fascinating prose poem with implications both for the book Modern Life as well as for modern life itself, interrogating the relation between art and life, creator and creativity. The subject of the piece might be a painting—it reads like an ekphrastic poem about a failed art work—or it might be another world. In either case, the poet/narrator/creator tries to distance herself from her repulsive creature/creations, using images again located between alive and not-alive:

The ham flowers have veins and are rimmed in rind, each petal a little meat sunset. I deny all connection with the ham flowers, the barge floating by loaded with lard, the white flagstones like platelets in the blood-red road. I’ll put the calves in coats so the ravens can’t gore them, bandage up the cut gate and when the wind rustles its muscles, I’ll gather the seeds and burn them.

The narrator of this piece ultimately rejects her distance from her creation and the resulting violence in a conversion experience that involves a dead horse in the road: “But if I didn’t make the ham flowers, how can I make him get up? I made the ham flowers. Get up, dear animal. Here is your pasture flecked with pink, your oily river, your bleeding barn. Decide what to look at and how.” The mental territory of this poem includes creativity, aesthetics, surrealism, ethics, politics, social justice, free will, and the relation of man and God. It’s a good map for reading the rest of the collection.

Other prose poems explore similar avenues with interesting variations. Harvey, in fact, most vividly displays her strengths in this medium, combining imaginative and artistic visual imagery with a flair for story-telling in poem after poem: “The Golden Age of Figureheads,” “Inside the Good Idea,” “Word Park,” “The Lost Marching Band,” “Strawberry on the Drawbridge,” “Your Own Personal Sunshine,” and “Free Electricity,” in which a woman develops a rash of electrical sockets all over her body, becoming a free source of light and power first to friends and family, then to strangers. The poem ends in a comic/cruel/cannibalistic/Eucharistic ritual: “Someone kind left a gap at my eyes, so at night I can see the red switches of the piles of powerstrips blinking and imagine the city running on whatever strange surge (not quite sugar, not quite caffeine) flows through my veins. That’s me in the hum of your fan, me in the crackle of your TV, me lighting up every last lightbulb.”

The line between surreal and speculative is another border of interest to Harvey. “Free Electricity,” for example, has a slightly different character if we think of the electrical sockets as a metaphor for, say, the demands made on contemporary women, versus a reality in some alternate universe. This is a new area in Harvey’s poems, which have always had an affinity for the surreal but not for science fiction, especially prominent in the three series that dominate Modern Life: “The Future of Terror,” “Terror of the Future,” and the Robo-Boy poems, about a mild-mannered, mixed-up robot on a quest to acquire human feelings despite his insensitive creator—a kind of revisionist Frankenstein’s monster who could be a metaphor for the disabled (particularly the neurologically impaired) or for the otherwise different.

It’s difficult to say whether “The Future of Terror” and “Terror of the Future” are more notable for their variation on the increasingly popular abecedarium and zabecedarium poetic forms, or for their speculative and frightening subject matter and imagery. Whereas these forms usually have 26 lines, each beginning with a different letter A-Z or Z-A (and sometimes, in the case of the “double abecedarium,” lines that end with the letters A-Z as well), Harvey’s variation takes the letters between F (for future) and T (for terror), and then uses those letters one after another alliteratively in the poem, creating a very different form than the regular abecedarium, whose stricter constraints sometimes create odd swervings in the subject matter. Harvey’s abecedarium is almost a prose-poem adaptation, and I wonder why she maintained the lineation at all, except that the pieces have a nice columnar shape on the page this way, rather like tall buildings.

The narrators of the two series, one a soldier, the other a lover, have an oddly matter-of-fact relation to the terrifying world they inhabit. Given this tone, Harvey displays her penchant for puns in “The Future of Terror/6,” despite the disaster:

There were girls waiting at the gate
but we were homonyms away from
understanding each other, like halve
and have, like “let me hold you” and “I hold you
responsible.” Hospital bed or house arrest
were the idylls we lived for. I promised to name
my firstborn Influenza for a better shot at the flu.
A knot of spectators got killed and unraveled
into the lake.

Destruction and violence are everywhere, unredeemed by art or love. “The Future of Terror/10” describes soldiers making a sculpture with useless scraps of people’s ruined lives—scissors, nails, nylons, a pram—and just as the reader is sucked into feeling hopeful, they destroy what they have spent so much effort building: “When it crumbled we stamped on the ruins. / It felt great to tear something down again.”

It’s not a matter of life and death, it’s life or
death. Here in the grove, after jar after jar
of grain alcohol, the sun looks like a halo,
then a noose. Give me a helping hand,
historian. Help me with “or.”

Life or death, Terror or Future. Ultimately Modern Life is at least as much concerned with ethics as art, with life as poetry, though they do not, for Harvey, exist in opposition to each other the way that war and peace, or terror and future do. In one of the collection’s last poems, a celebration of tolerance and imagination called “Ode to the Double-Natured Sides of Things,” Harvey envisions a God who resists dualism, too, who “invents a more flexible forgiveness.” A slight imbalance changes the world just enough so that:

The usual botany class—two rows of long tables, students on either side with wildflowers in vases between them—keeps its format, but now, if a boy puts down his reference book and stares instead at a dot of green on the cheek of the girl across from him, his essay “How a Leaf So Tiny Got on Her Cheek” is relevant, may even warrant an “A.”

We live in a society filled with Fear, Anxiety and Violence, and leaders who tell stories about these things in order to consolidate their power and manipulate their constituencies. Modern Life also tells stories about Fear, Anxiety, and Violence, but with a vastly different purpose: to reveal their dead ends. In the title poem from Sad Little Breathing Machine, Harvey wrote, perhaps answering Wordsworth’s “The world is too much with us”: “The world is slow / to dissolve & leave us. Is it your // hermeneut’s helmet not letting me/filter through?” Modern Life exhorts, pleads, begs, screams, and wheedles at its reader to remove those helmets and get out of the “boxes inside boxes” that so many of our modern lives have become.