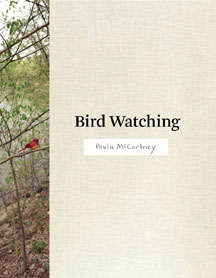 Bird watching, like any pastime that requires a lot of quiet, solitary, repetitive behavior, comes with a degree of built-in frustration. Even under ideal circumstances—fair weather, good visibility—there’s no guarantee that a day in the field will amount to much if your subjects aren’t cooperating, and they often don’t. Birds are finicky, elusive subjects of study; their behavior is inconsistent. It is with this in mind that we can enjoy the preface to Edmund Selous’s near-definitive 1901 guide to the subject, entitled simply Bird Watching. Selous, a British ornithologist who authored a dozen books on the subject, lays out a few ground rules in the book’s preface. “It is not my intention to make general statements in regard to the habits of any particular bird,” he warns nervously. He then further qualifies the narrow scope of his intentions, until his text teeters on the brink of incomprehensibility. See if you can work through this:

Moreover, it is obvious that in much of the more important business of bird-life, one would be fully justified in arguing from the particular to the general: perhaps (though this is not my opinion) one would always be. But, whether this is the case or not, I wish it to be understood that, throughout, a remark that any bird acts in such or such a way means, merely, that I have, on one or more occasions, seen it do so.

Birds. They’re not really cooperative. At the very least, they’re not in the business of doing their human spectators any favors. 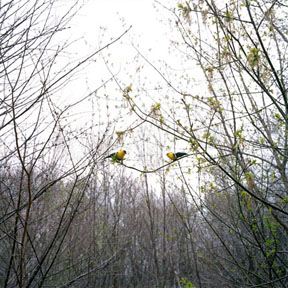 Under such circumstances, maybe it’s no coincidence that Minneapolis-based photographer and book artist Paula McCartney introduces a recent body of work, also entitled Bird Watching (recently published in book form by Princeton Architectural Press,$50), with a similar expression of frustration: “I would stop to look at the birds,” she writes, “but was always frustrated by the fact that they would be too far away, moving about too quickly, or would never land in an appropriate composition.” Apparently, a bird’s mere appearance resists easy representation just as surely as its behavior defies attempts at accurate description.

Selous’s warnings are telling. He is claiming, essentially, that no single bird watching experience can perfectly capture the essence of the bird. Simply because one sees and records a bird engaging in any given action doesn’t mean that all birds of the type would do the same in a similar situation. “One may have only had the luck to see well a single point in the round of activities of any species,” he writes.

Consider where this leaves the visual artist, then. The task of capturing the essential qualities of any species of bird—“here is a photo of a typical summer tanager in its typical native habitat”—becomes impossible, because there is no such essence. Such a caption becomes a sort of lie, or at least a vast oversimplification. True, you may have a photo of a summer tanager perched upon a branch. But what are the circumstances surrounding the shot? At what point in the bird’s “round of activities” are we? Can we even know? Just because this particular tanager perches in such a way, do all tanagers? This is just the sort of situation, so subject to nuance and unknown variables, which prompts Selous’s anxious logorrhea.

Accept these bird watching travails as given, and a whole new, troubling line of inquiry opens up. If something as seemingly simple as a photo of a bird in the wild so easily becomes a misrepresentation, what other misrepresentations within visual culture might we be unaware of? For that matter, can any visual representation of a subject in the physical world be trusted? Here is the space where McCartney steps in: she solves the problem neatly by eliminating the birds altogether, with all of their inconveniently idiosyncratic nuances and behaviors. She replaces them in their natural habitats with perfectly stationary craft-store doppelgangers—the sorts of artificial Styrofoam-and-feathers birds that have adorned Christmas wreaths and floral displays for generations—carefully placed in sylvan settings and beautifully photographed. 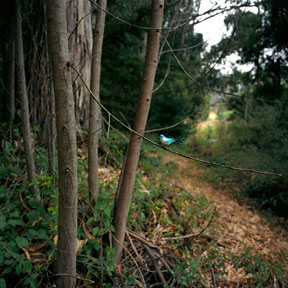 This perfection is precisely what is so appealing about the Bird Watching photographs when you first see them. The birds sit perched on branches, impossibly picturesque, not a feather out of place. McCartney’s subjects look exactly how we expect them to look. In framing wonderfully colored songbirds within gorgeously composed natural settings, she seems to have achieved a perfect dominion over nature. In the monograph of the series, each photo is even accompanied by a few hand-written field notes, describing the bird’s location and the conditions in which the photo was snapped. She covers panoramic vistas, captured across the entire country, in her survey. In Summer Tanagers, two of them sit in an upward-sweeping arc on a mossy, overhanging branch, over an overgrowth of ferns. A pair of Vermillion Flycatchers perch on a branch, overlooking a river. Winter Bluebirds sit in thin, leafless trees in front of a wooded snowscape. It’s all too perfect. Only careful observation reveals a certain stiffness in the legs, or the hint of a wire wrapped around branch holding the bird in place. The thing is, by the time you look that closely at the image, you’ve already been taken in by the artist’s deception. What initially looks like a mastery over nature suddenly seems like a subversion of it.

Or, perhaps it’s something else. Earlier in her career, McCartney shot a series of photographs at the Bronx Zoo. The zoo, the natural history museum, and the other institutions built in the 19th and 20th centuries to educate Americans on the natural world have undergone some radical transformations in the past few decades. It’s rare these days to encounter a great hall full of taxidermied animals in self-contained dioramas. The photos that make up McCartney’s Bronx Zoo series, like those in Bird Watching, straddle nature and artifice, pointing out the common ground between the naturalist and the artist. The tableaux (primarily aviaries) that she depicts are carefully, meticulously presented to create the impression of untamed nature. Only in a few does she tip her hand, revealing the contrivance. In a photo entitled Hammerhead Stork, the titular bird perches on a branch in front of a white wall; above it, we see an artificial skylight and an I-beam, and below, wild undergrowth.

Ironically, if the experiences of generations of schoolchildren are to be trusted, those old-style dioramas—think of the famed squid and whale at the American Museum of Natural History—for all their artifice, created in the viewer a sense of the sublime, the same sort of awe that one often finds in encounters with nature. In a similar way, McCartney invokes that reverence for the natural world, on a smaller, more intimate scale. She plays both naturalist and artist, enacting both roles with such enthusiasm that the lines between them are almost completely blurred.

About the Artist: Paula McCartney creates photographs and artists books that explore the idea of constructed landscapes, using the scientific practice of collecting, labeling, and organizing specimens as a starting point for her work. She finds inspiration in Karl Blossfeldt’s Art Forms in Nature, John James Audubon’s Birds of America, and James Nasmyth’s constructed lunar landscapes—works by artists who collected and interpreted nature in their own peculiar ways.

McCartney earned an M.F.A. in Photography from the San Francisco Art Institute in 2002 and currently lives in Minneapolis. She has received both national and regional grants for her work, which has been exhibited internationally. Bird Watching is included in the Museum of Contemporary Photography’s Midwest Photographers Project, and is featured in a solo exhibition at the Klompching Gallery in Brooklyn until April 23, 2010. A monograph of the series is also available (Princeton Architectural Press, $50). More work can be seen at www.paulamccartney.com.

Browse through more images and get additional information about Paula McCartney in a related, web-only collection of artwork and information at mnartists.org.