In the past few years, around the middle of December, I’ve noticed a new wrinkle in the weather-related small talk of early winter: in the course of conversation, someone inevitably mentions how much milder it seems than in decades past. “There hasn’t been much snow,” one of us (usually a native) will say. That’ll be quickly followed by the observation, “Most of the lakes don’t even look frozen yet,” by someone else. Then, a third person will inevitably wonder aloud: “You think the lakes are going to freeze enough in time for the art shanties?” And in the absence of a deep chill, hearing this is the surest sign that you’re entering midwinter.

For many of us, the Art Shanty Projects have become a meteorological touchstone, which is perhaps the highest tribute that can be paid to any phenomenon in this part of the country. If you’re not aware of this unique Minnesota happening, Art Shanty Projects is a regular January art event on Medicine Lake in Plymouth, about ten miles west of downtown Minneapolis. Founded in 2004 by two artists, Peter Haakon Thompson and David Pitman, the annual festival invites dozens of artists to build a village’s worth of ice-fishing shanties with various themes—Knitting, Karaoke, Shackleton, and “Wonder” are just a few of the many shanties that have cropped up in the past—and then invites the public out on the ice each weekend to explore them. It’s gotten bigger and bigger every year; there were upwards of 16,000 visitors this year. There are lots of people living in Minnesota who hate winter—transplants and natives alike—but I have met very few people who have experienced the art shanties and didn’t consider them, at the very least, a real high point in Minnesota’s often-wretched winter months. Much of the press you’ll read about Art Shanty Projects, especially in national media outlets, hews pretty close to the “oh, those quirky Minnesotans and their quirky little projects” line of thinking. But this approach doesn’t capture the enormity of our arts community’s affection for the project—even, I suppose, their reliance on it during a tough part of the year. 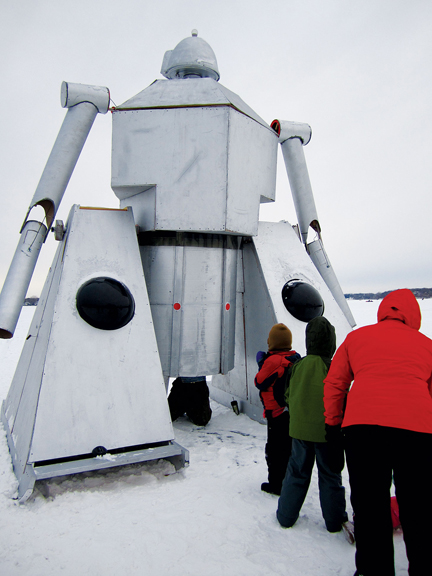 Diminutive descriptors like “quirky” don’t do justice to the sheer scale of the recent art shanties experience either. The shanties have expanded enormously in the past few years; it’s difficult to think of any cultural event that’s gone from fringe art outlier to well-attended cultural staple in such a relatively short amount of time. But then, they’ve always been more accessible than a lot of public practice-oriented art creations. The project is deeply rooted in the vernacular culture of the region, as most anyone who’s spent some time in Minnesota has at least some understanding of the culture of ice-fishing. That accessibility is, in some respects, precisely what makes it increasingly difficult to mount as a large-scale event. You can only fit so many people safely onto a frozen lake; likewise, the shanties themselves are small structures, built to house just a handful of people at a time. Despite these built-in limitations, the festival is growing exponentially.

Last year, for the first time since the project’s inception, the shanties went on hiatus. The complexity and growth of the project compelled planners to take a year off, regroup, and plan for the future. Maybe not coincidentally, 2010-11 was a brutal slog of a winter, and the fact that there were no officially sanctioned shanties made the season’s harsh extremes seem that much more relentless. I heard reports all winter long of renegade art shanties showing up on various lakes and carrying on, albeit without the mandate or sanction of the Art Shanty Projects organization. These may have been just hallucinations—I was never able to confirm such happenings personally—but news of ad hoc shanty villages didn’t surprise me. Such is the devotion of the loyal. 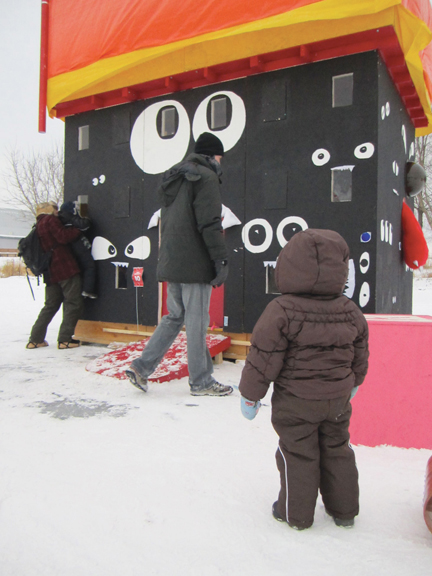 RMonsters Under the Bed Shanty

According to festival organizers, the plan from here is to hold the event biannually—so, the full Art Shanty Projects will be back in 2014, after which the event will rotate to other metro-area lakes. Next year, during what they’re calling a “disperse year,” shanties will proliferate in a decentralized fashion, with small clusters of them inhabiting neighborhood lakes throughout the Twin Cities. On the festival website, this dispersal is described in part as “a return to ASP’s roots and spirit of experimentation.”

The push-pull between accessibility and experimentalism has always been a key element of the project. As accessible as the shanties undeniably are, there is something of an outlaw spirit to the festival that can be quite unruly—and not always welcoming. Most participants and visitors over the years know well the experience of opening the door to a strange art shanty, looking inside, and being met with something approaching scowls by its inhabitants. Fine. You just go to another structure nearby and see what’s going on in there. The sheer variety of contributions over the years has made all kinds of interactions possible, from the weird and frankly quite creepy to celebratory and scream-at-the-top-of-your-lungs fun—and in some cases, all of that at once. 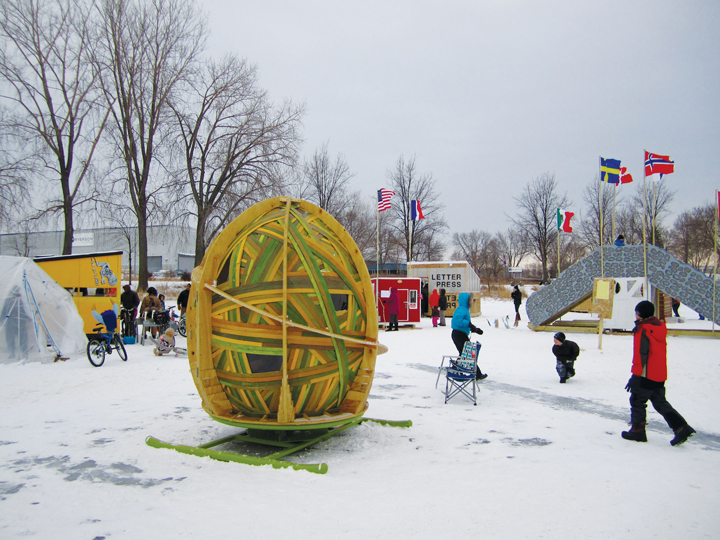 This past season’s event felt somewhat different, offering a more interconnected experience than it had previously. Given the mild temperatures, the shanties were clustered close together near the shore, in a layout particularly suggestive of a small village. I noticed more families attending, and the fact that it was so temperate outside made it easier for people to walk around and interact, instead of darting from shanty to shanty, bundled in layers of Gore-Tex with their faces completely covered against the cold. Their proximity to shore made the shanties easier to access—years past have found the structures quite far out, in the center of the lake, a freezing ten-minute walk from the parking lot. This year, there seemed to emerge a narrative self-consciously tying all the shanties together into a shared civic space—more like an actual, functioning little community than the free-for-all of previous years.

Some will applaud this openness and accessibility to the general public; others, no doubt, yearn for the woollier, more anarchic manifestations of past shanties, with their more exclusive subculture of artists and true believers. Neither group is wrong; this is just the natural course of things, as projects change and grow over a period of years and become more successful. Art Shanty Projects is one of those rare, grassroots cultural experiences that truly has become bigger than the sum of its parts. Wherever this trajectory takes it in coming years, and whatever the festival eventually becomes, it has already come to inform the way a sizeable chunk of the collective arts community of the Twin Cities interacts with winter. At the very least, it’s safe to say the festival has outgrown “quirky” at this point, evolving into something much more significant on the local cultural stage. And while it probably is hyperbole to say that without the shanties, we couldn’t deal with winter, they sure make the season a whole hell of a lot easier.