Bruno Bobak and Miller Brittain are two important 20th-century Canadian artists whose work remains relatively unknown in the U.S. Their careers both started in the late 1930s; Brittain died in 1968 and Bobak is still living. Each painter stays primarily in the realm of figurative and landscape work, but both employ widely varying styles and approaches over the course of their careers. Given the massive shifts in art going on internationally during this time period, neither artist's work can be considered particularly groundbreaking—neither is a Pollock or a Warhol—but both communicate exceptional depth of feeling. Each of these monographs conveys an artist's struggle to find his specific voice, and to deal with civilian life after war. 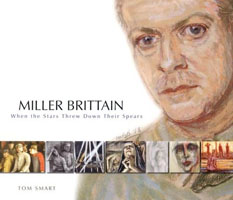 Both Bobak and Brittain were Official Canadian War Artists during World War II, and each monograph devotes a chapter to this aspect of their lives. War and art have a strange relationship; before photography, history painting was a primary means of documenting and glorifying war, unabashedly favoring whichever side commissioned the artwork. But after photography became the primary means of documenting war (from Civil War photography to the Abu Ghraib snapshots), modern painting became more interested in its critique, most famously with Picasso's Guernica. It seems strange that even after that painting's exhibition in 1937, the Canadian Armed Forces would set up a program in 1943 to bring painters to the field to document “significant events, scenes, phases and episodes in the experience of the Canadian Armed Forces.” 1

Bruno Bobak was the youngest of the Canadian War Records program's thirty-two painters; he was only twenty-one when sketches he made during his army training came to the attention of his superiors and he was sent to England and given a studio rather than assigned to the trenches. Though his first watercolor sketches of tank training and subsequent paintings are beautifully composed and executed, Bobak's work gets darker in 1945, and it seems as though he suddenly wants to express something terrible rather than simply follow orders; paintings like Dead Goats in Empel show the emotional consequences of war. While they are technically still propaganda, these paintings are not about glorifying soldiers' actions as much as they are an attempt at recording the soldiers' emotional states. This seems to be, at least in retrospect, the main benefit of this kind of 'documentation'; current official thinking about these works, as Laura Brandon of the Canadian War Museum puts it, is that "They may, in fact, represent an artistic truth and, in this sense, provide a more valuable record of the historical experience of the war than the field sketches." 2

At the time, however, the officers in charge of the Canadian War Records were looking for direct experience of combat rather than a reflection on its aftermath. Ironically, most of the artists did not actually go to the front, and their paintings are largely composed from field sketches of combat exercises or imagined battles. Miller Brittain was an exception to this; he was a bomb aimer in the Royal Air Force, and stayed on duty even after he was asked to become a War Artist. While his superiors were excited to have someone who could use combat experience in his art, Brittain was both traumatized by battle and more interested in the social experiences of his fellow soldiers; most of his work is of soldiers in the pub or barracks. He only made one painting that represents battle—Night Target, Germany (1946). It is a bizarre, haunting, and tremendously successful work, using both realist and abstract elements to give the viewer a sense of vertigo, destruction, and moonlit beauty, all at the same time. Tom Smart's overarching argument in When the Stars Threw Down Their Spears is that the formal elements of this painting—exploding bombs and straight shafts of searchlight—recur in all of Brittain's later work, which ranges from religious painting to surrealist-inspired landscapes and stylized 'everyman' figure compositions. Much of this work is, at first glance, too expressionistic and directly allegorical to interest a contemporary audience, but it does have a power that stems from a continued investigation and transformation of a singular image of beauty and destruction. Over the course of twenty years, Brittain's bombs trailing smoke become drooping flowers, a fitting image perhaps inherited from "In Flanders Fields", the seminal piece of Canadian War art. 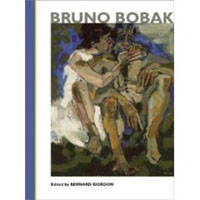 The Full Palette is more of a biographical story, including details like Bobak's marriage to Molly Lamb, the first female Canadian War Artist, and how after the war they moved to Galiano Island off Vancouver, where they built a house out of their very salary—they worked for a logging company and were paid only in lumber. Bobak's style shifts radically over the course of his career, from brutal woodcuts to Turner-esque seascapes to bold, expressionistic figure paintings. It is in these figure paintings that his war is most readily apparent; his often contorted, elongated, tired bodies have the passion of something left unresolved.

Each of these books offers a comprehensive look at an artist who is less concerned with innovation than with communication. Both present fine portraits of artists who depicted the subjective experience of war, and who struggled to leave that experience behind them for the rest of their careers.

Click here to purchase Miller Brittain: When the Stars Threw Down Their Spears at your local independent bookstore