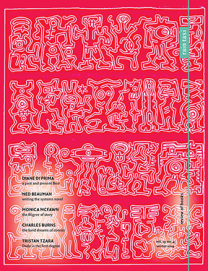 Michael Jacobson is a writer and artist from Minneapolis, Minnesota USA. His books include The Giant’s Fence, Action Figures, Mynd Eraser, and The Paranoia Machine; he is also co-editor of An Anthology Of Asemic Handwriting (Uitgeverij). Besides writing books, he curates a gallery for asemic writing called The New Post-Literate, and sits on the editorial board of SCRIPTjr.nl. Recently, he was published in The Last Vispo Anthology (Fantagraphics), and had work in the Minnesota Center for Book Arts exhibit: Directed. In 2013 he was interviewed by SampleKanon and Asymptote Journal. He recently curated a show of asemic writing in Rijeka, Croatia. In his spare time, he is working on designing a cyberspace planet named THAT. The cover art for Rain Taxi’s 2014/2015 winter issue is entitled "Action Figures: asemic hieroglyphs."