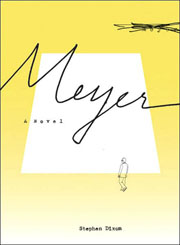 Certain writers writing about writers writing (or, worse, writers writing about writers who are trying to write and not writing) remind me of a story from Louis Sachar’s Sideways Stories from Wayside School, the one where Sammy, a new kid, won’t take off his raincoat inside. His teacher tells him to take it off, but when he does there’s just another one underneath, and Sammy seems a little smaller. He keeps stripping, and with every layer he diminishes, until finally what’s revealed is not a boy but a rat—a dead, smelly one. Fortunately, I do not smell a rat beneath the many layers of Stephen Dixon’s 27th novel, Meyer. Each layer peeled away from Meyer Ostrower reveals neither vermin nor litter but something increasingly alive, ever closer to the core of his being.

The book chronicles the 68-year-old Meyer’s dissatisfaction with what he’s been writing. Unwilling to rehash old material and increasingly uncertain about certain memories, he improvises moving, sweet variations on his life: the first time he met his wife Sandra, his own death from excessive snow shoveling, the improbable seeds of an affair with an attractive younger neighbor. He examines everything with equal care, from the small (is that stain from coffee or cat piss?) to the large (what to do with his ashes?). With nothing as important as the current thought and any thought as good as the next, Meyer recalls and revises years of experience, making each moment utterly real.

Meyer is more than a glorified desk diary, however. While his internal world is compelling and charming, when Meyer steps outside it (or when it interrupts him), we see increasing amounts of his loved ones, not to mention our own selves, in his fantasies and worries. Sex with his wife is just one instance. Their passion is driven less by novelty than by comfort, but when narrating life after Sandra, Meyer imagines telling off a well-meaning matchmaker, “You know what? I’d rather not. . . I don’t want to start in with someone new. Nor do I want to try having sex with anyone else.” Though their sex itself might best be described as logistical, and though Meyer certainly has immature moments, their romance is settled, mellow, and sage.

Meyer is candid about the most serious topics, a winning trait that rubs off on (or has rubbed off from) the people closest to him. Here he debates the actual date of his mother’s death with his sister, Naomi (she says March, he says February):

“If you say so,” she says. “You sound very positive, and you’d remember.” “I have it written down in my datebook for that year, the day she died.” “You still have that book from three years ago? What, for tax purposes, in case you get audited and have to show it to them like a diary for certain things?” “No,” he says. “Because it has phone numbers and addresses in it I haven’t transferred to this year’s datebook.” “Why don’t you transfer them, or just get a regular address book?” “I have one but it’s for the most part filled up. As for transferring them to later datebooks: not enough space; I’m also too lazy to; and I know where these numbers are in the ’02 book: all in the front. But other things are in it too. PIN numbers, for instance.” “You keep your PIN numbers out like that?”

Read aloud, it sounds like an episode of Seinfeld guest-written by the late Elisabeth Kübler-Ross. The rhythm of their conversation feels absolutely natural, flowing so easily from the monumental to the mundane that the absence of white space between dialogue is hardly noticeable. Peel away the chatter and we arrive at the reason Naomi called in the first place: Meyer’s niece is engaged. (“To that guy you don’t like?” “I never said I didn’t like him. I just said his family is very strange and I only hoped it didn’t rub off on him.”) This huge piece of news doesn’t keep Naomi from nagging him over the datebook, and—brother to the end—he defends his eccentricity. They hang up in the same fashion (“Goodbye, my dear brother. I love you, even if you can be annoying.” “Same here,” he says, “about the first part.”), and their intimacy is only deepened by the air time given to his three-year-old datebook.

Our intimacy with Meyer, on the other hand, grows in moments such as a random phone call from a man looking for a dentist named Myron Ostrower. Synapses fire: Meyer recalls his stepfather, a dentist named Irwin Ostrower who refused to use gas while filling his step-children’s cavities and whose ego was bruised when, as adults, they went to different dentists. He recalls his stepfather’s diagnosis with Parkinson’s, the slow loss of patients as he practiced with shaking hands, and emptying Irwin’s office with his sister. The chapter ends with this oddly chilling sentence: “Meyer, after his stepfather died, kept one of the mouth mirrors, which he’d never used for anything, a curette for his nails, and two forceps, which he uses sometimes as pliers or to retrieve things like paperclips that have fallen under the space bar or keys on his typewriter.” Perhaps the shivers come from a sudden intrusion of reality. For the bulk of the book, Meyer, with his relentless if unproductive imagining, shields us from that.

From what, though? Well, it ruins nothing to say that between its preoccupation with death and its protagonist’s exhaustion with old material, the true subject of Meyer is not writer’s block but mortality. “To see what is in front of one’s nose requires a constant struggle,” George Orwell once wrote, and our hero is staring down death, unfettered by sentiment or cynicism. When Meyer does this best, he creates a seamless, real world that we forget is twice removed from the flesh and blood holding open the pages. Look at this scene, completely imagined by Meyer, in which he’s caught staring at a stranger and then apologizing for his bad manners with a clichéd excuse. The woman, not fooled, says to Meyer:

“Listen, I don’t mean to be rude either, but I saw you looking at me a number of times tonight, and it didn’t appear to be the way you said it was—the do-I-know-her story—and I just have to say I’m not interested.” “You mean in me?” and she says “Come on; really.” “Okay, you’re right. My story is bullshit, though I am a teacher and I have had a couple thousand students, half of them women, and I admit I was and am interested in you. But the age difference, not to say my stupidity in acting out, and I don’t even know if I have the expression right, my absurd fantasies sometimes—too much for you, true?” “To be honest, the age difference is huge. Even if I wasn’t with someone now, I’d never consider seeing a man so much older than I. I would, though, if I thought him interesting, and I’m not saying I think you are, except for your honesty, and that could be a part of the whole act too, have a coffee with that person or meet him for a harmless lunch.” “So have coffee with me one day or a harmless lunch.” “Too late for that now. Excuse me, and good talking to you,” and she sticks out her hand to shake. “My name’s Meyer, by the way. Meyer Dumbo Ostrower,” he says, shaking her hand, and she says “Funny,” smiles as if she did think what he said was funny, and goes into the living room.

The brilliance of this scene isn’t so much found on the page, though it’s there too: sharp prose, biting dialogue, a desperate older man with whom the reader empathizes helplessly, an understandably exasperated younger woman forced to spell out her rejection in sans serif capital letters the size of the Hollywood sign. It hurts, but by this point in the book Meyer is like an uncle, and at this point in the scene he’s imagining, he’s a drunk uncle in the grand tradition. Like Sir Toby Belch, he deserves what he gets. Unlike the scurrilous rascal of Twelfth Night, however, he’s honest. Even if he ends up being cast as a pathetic geezer in his imaginings, the imagining itself helps. Meyer battles anxiety in the face of an increasingly imminent end, and this ultimate procrastination of the original deadline might have led to the only flaw of the book, a jarringly long final chapter. Then again, by then, goodbye is something all of us—Meyer, Dixon, and his readers—will be comfortable postponing for just a bit longer.