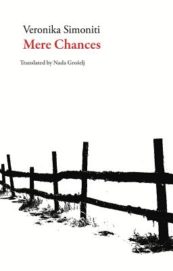 In Veronika Simoniti’s “On the Mainland,” the narrator goes to spread his late wife’s ashes. He starts with Provence as a destination, then settles on Tuscany—it’s closer. He crosses the border from Slovenia into Italy, the ashes in an urn “firmly wedged among the other stuff” on the front seat. But along the road, he passes an ocean liner biding its time in a slim canal. Rethinking the ashes’ destination, he takes the urn aboard and falls asleep, only to be awakened by a workman who invites the mourner to his home for coffee. When the man returns to his car, his wife’s ashes are gone.

Simoniti’s stories in this collection explore those moments when place slips beyond one’s imagination and into the limb; moments, often in the corners of a strange city, when one looks for a semblance of what’s real. In his great essay, “Mapping Home,” Aleksandar Hemon calls this a need for a “personal infrastructure” against the impact of dislocation. At points, one has to present the facade of a self in a world of dissolving borders and unknown place. When things resonate with “uncanniness or distance,” Simoniti’s tales similarly offer a new way into the uncertain and unbound geographies here.

Things have weight in the stories of Mere Chances—languages, walks along train platforms, and especially loss. Hearing the “homey clatter of plates” in an Italian city, a young Slovenian woman reflects, “This is exile.” Lifted out of Europe and set down by her family in Bolivia, a schoolgirl observes the weight that “the old world” still has on her grandmother’s memory. Her grandmother continues to live in that old world, ignoring the Bolivia that surrounds her; the granddaughter calls her grandmother’s adaptation “forgetting from the back.” Dislocation forces other adaptations in Simoniti’s stories. Do even the dead remember “other worlds?” Refiguring his identity, a man recalls his father’s development of a noiseless typewriter, not-so-noiselessly concluding: “I was not my father’s masterpiece.”

One thing that is lost in these stories is a coherent, bounded Europe. Simoniti’s characters move through unmapped and imagined Europes. They travel in a range of weighty glances, erased borders, and accidental substance. One attempts to sell the Eiffel Tower for scrap metal. Another, propelled by a terminal cancer diagnosis, heads for Portugal, “to peer through the cracks of Southern Europe’s most reclusive people.” These characters’ essential skill is an ability to “dissemble,” a capability to present all the marks of some identity that is expected, a semblance of a known or anticipated world even as that world is in the process of disintegrating. According to the narrator of “Portugal,” “This isn’t running away . . . it’s just something I need to do before I run away for real.”

The narrator in “On the Mainland” surmises, “It doesn’t matter where exactly you transform into new substances . . . abroad is a place that’s different.” He recrosses old boundaries, loaded with the weight of “losing” his partner twice, having “mislaid [her] for good.” He returns to his corner of Europe, his task on that odd (and very real) line between finished and incomplete. His conclusion, in Nada Grošelj’s wonderful translation: “Let me know, by the way, if there are any such words as home and abroad on the other side.”