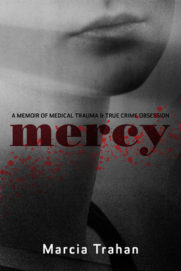 Marcia Trahan’s debut memoir, Mercy: A Memoir of Medical Trauma and True Crime Obsession, opens with the familiar narrative of a woman battling depression and a host of health problems escaping into true crime television drama. She is not simply watching, however—she is quick to let the reader know that what started as an interest quickly became an obsession. Her fascination with the subject is explored in the same analytical and neurotic ways many may have used to explore their own concerning behaviors—with investigative digging and a generous helping of self-loathing. Thankfully, Trahan also has a self-deprecating sense of humor. As she so genuinely confesses, “I thought I was a freak.” But her revelations about her own behavior quickly raised new inquiries into not only her own habits, but those of so many other women—the primary consumers of these true crime love-and-murder horror shows. She isn’t a freak; she’s following a popular pattern—but why? Trahan isn’t just exploring our television viewing habits, but the sensational ways women are depicted, and how the audience, women especially, consume those stories.

In this short memoir, Trahan has captured the slow and steady reveal well. She lets us in on a difficult childhood early in the narrative—not one, but two alcoholic parents, neither of whom ever seemed to apologize for how they lived their lives. The last baby of a big family, home alone with her parents, she brings to light her scars slowly, weaving them in and out of the health issues she navigates as an adult. Trahan also integrates the stories of serial killers and true crime dramas that she watches and the research holes she dives down to learn more. She doesn’t just study the true crimes themselves, but why it is we choose to consume them so compulsively. While her medical drama unfolds in a linear narrative, the rest of the book abandons chronology. The movement of the stories from her childhood, her relationship with her mother, and the love story of her and her partner all come out organically, in pieces, the narrative more concerned with how she is viewing her past in light of her traumas than with what happened next.

What Trahan does in this woven narrative is not what we expect from a patient, retrospective narrator. The conventional wisdom that we need our memoir’s protagonist to be likeable—especially if she is a woman—is abandoned. Trahan, instead, freaks out, and in doing so accomplishes what a memoirist really needs to: She is hopelessly honest on the page. She does it first when judging the poor choices of true crime victims on TV: “Part of the wicked fun of watching true crime is that women’s lives are laid bare, allowing female viewers to pick apart the intimate details, and to predict the trouble that’s coming.” We all know these stories are based on real life—but Trahan shows how we often consume them with a little too much pleasure and judgment.

Trahan is hard on herself, but she writes a flowing story of a woman who, unlike those she sees on TV, is unpredictable. She brings insight and vulnerability to hard moments as she realizes how her obsession with true crime manifested. In one passage, after she overreacts to her husband trying to help her cut her hair, she admits, “I felt small and ridiculous and damaged.” These tough assessments become a signature of our ruthless narrator. She doesn’t have a lot of sympathy for herself, even when she is drowning in her sorrows, and she doesn’t seem to be looking for sympathy from the reader either. Instead she is trying to figure out why she’s doing what she’s been doing, and how she can get to the other side of it.

The careful pacing of Mercy allows the reader to watch Trahan find the connections between where she came from, what she went through, and where she ended up—marooned on an island where other people’s horrors are her main escape. Her relentless self-exploration and doses of gallows humor make the pages of the book turn. Reading about this larger-than-life cultural obsession and Trahan’s experience will have readers pondering the reasons we consume true crime stories with such intense fascination.