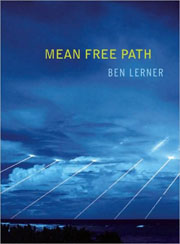 Ben Lerner’s newest book isn’t really interested in giving straight answers—or for that matter, asking straight questions. Thoughts and conversations are disrupted, ideas and syntax scrambled. Meaning struggles to the surface through the disappearing memory of a dream. Formally, Mean Free Path is shaped by the speaker’s hesitation and fixation on particular words or images, while the book’s concerns with absence and grief, writing and language-cum-politics emerge out of the white noise.

The initial concept for these poems also draws heavily from the physical sciences, an idea Lerner discussed recently during a BOMB magazine interview, saying the title “describes the average distance a particle travels before it collides with another particle, becomes a kind of metaphor for the way the lines break off or fragment or recombine or collide with one another.” For Lerner, translating physical phenomena into the formal act of poetry becomes a way to investigate how “science got detached from the human concerns,” specifically through institutionalized divisions in the academy that affect how we see the world.

Because Mean Free Path is propelled by this endless process of recursion and retraction, Lerner’s diction departs radically from the speech-like rhythms of his earlier Angle of Yaw (Copper Canyon Press, 2007). With each addition and interruption, his poems develop a complex polyvalence that gives the book emotional and political traction, charging even the most direct moments with additional implications:

There are three hundred sixty-two thousand
And that’s love. There are flecks of hope
Eight hundred eighty ways to read each stanza
Deep in traditional forms like flaws
Visible when held against the light
I did not walk here all the way from prose
To make corrections in red pencil
I came here tonight to open you up
To interference heard as music

Playfully alluding to the structure of the stanza as it comes to life, the speaker offers us multiple pathways through the poem, each combination offering a new reading, a new idea to privilege. Recycled phrases in this stanza (“And that’s love,” “red pen,” etc.) trigger associations with the loved ones (Ari, Barbara, Robert) who populate the book’s “Doppler Elegies” and “Mean Free Path” sequences. Most striking in this particular moment, however, is how the speaker weaves together ideas about writing as hope, the failure of articulation as love, and “interference . . . as music.”

As it is with most cases of haunting, the absences in Mean Free Path are often much more striking and material than what is present in the poems. We get names but very few people: “Across the water, you can see / the new construction going up / is glass. The electric cars / unmanned,” the speaker observes, de-populating a landscape resonate with signs of activity. Similarly, we are presented with signifiers of war, even though the poems refuse representations of conflict: “My numb / Rebarbative people, put down your Glocks / And your Big Gulps. We have birthmarks to earn.”

Lerner thus fights to represent a hollowed-out contemporary America without capitulating to the fascist language of representation, one of the primary struggles the speaker chronicles throughout the book. Accordingly, even the act of writing is haunted by the absence of a free language: “As brand names drift toward the generic / We drift toward fascism, a life in common / Replaced with its image.” Although Lerner risks didacticism with lines like this, the powerful results of his experimentation provide us with new means of expression, possible routes away from a degraded language and perspective, and toward reconnecting a dehumanizing “science” with “human concerns.”