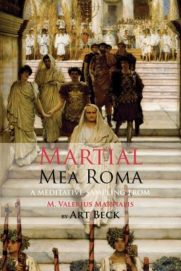 In a recent essay on translation, “The Latin Epigram: Brevity, Levity and Grief,” Art Beck suggests that what defines the Roman masters of the epigram is their remarkable blending of the aphoristic and the elegiac. He insists that the more ample range of feeling found in the shorter Latin poems is what sets them apart from the noteworthy English tradition of the 18th century epigram.

In Beck’s new Martial compilation, Mea Roma, this critical understanding of Roman elegiac verse couldn’t be more in evidence. The translator’s selection, as Beck writes in the preface to Mea Roma, “becomes in itself an aesthetic of translation,” presenting some 140 poems, of varying lengths (from two to twenty lines), out of a canon of nearly 1,500 short poems. Beck presents his selection bilingually—a vital feature of the book—to serve as a starting point for a reader unacquainted with this remarkably quirky classic, or who has been only marginally exposed to some of Martial’s more notorious verses.

What immediately comes across from Beck’s renderings of Martial is the subtlety with which the Latin poet employs everyday speech. These epigrams are so much more than displays of an acerbic, sometimes obscene wit, as all too often has been the portrayal of Martial. Let’s consider a few of the translations to underline the remarkable effect Martial is able to glean from the quotidian, as well as the sensitivity and vigor of Beck’s English versions.

It might be interesting to look at the elegies on the death of the child Martial calls Erotion, a six-year-old slave girl, for whom the poet composes three very different versions of his lament. I quote the three in their entirety to emphasize the sensitivity and profound caring found in the poet’s approach, qualities that for some readers might be rather unexpected. The first, “Book V, 34,” is a graceful and poignant farewell meant to accompany Erotion’s little shade to the underworld, commending her to his deceased parents, the “old guardians” of his own childhood:

Father Fronto, mother Flaccilla, protect this child
who was my lips’ delight. Don’t let the darkness
and the snapping mouths of Tartarus’ monstrous
hound panic Erotion’s shivering little shade.
She almost survived her sixth chilly winter.
She lived just that many days too few.
Let her play and work her mischief on you, old
guardians, and chatter away and garble my name.
Soft grass gently cover these gentle bones. Please,
earth, rest as lightly on her as she scampered over you.

The second version is a much less conventional farewell, bound up with the social context of the poet’s time, wherein one of Martial’s friends questions the poet’s grief. However beautiful and ingratiating a child Erotion might have been, she was, after all, according to the conventional wisdom of the time, just “a little house slave.” When a friend reminds him of Erotion’s station in life, Martial’s grief gives way to anger and the poet can’t avoid taking up, with memorable irony, the cruelty and hypocrisy of his comfortable friend’s remarks. One of the longest poems in Mea Roma, “Book V, 37”—where Martial shows his debt to the Latin satirists, from Horace through Juvenal—follows on the heels of the first elegy:

A child with a voice as sweet as the fabled swan’s,
gentler than a Galician lamb, delicate as a Lake Lucrine
oyster shell. Who you wouldn’t trade for Red Sea pearls
or polished Indian ivory. A lily shimmering in new snow.
Her hair glowed like golden Baetic fleece, like German
curls, like a hazel dormouse. A girl whose soft breath
was as fragrant as damask roses, or Attic honey
fresh from the comb, or amber warmed in the hand.
Next to her, peacocks were crude, tiny squirrels
unlovable and the Phoenix nothing much.

Now Erotion lies still warm in the grave. The bitter
edict of brutal fate took her before even completing her
sixth winter. Our love and delight, my merry playmate.
And Paetus, my friend, forbids me to weep, beats his
own breast and tousles his hair: “Aren’t you ashamed
to lose it over the death of a little house slave,” he says.
“I buried my wife—but I got on with my life. And she
was a socialite from the old nobility, proud and wealthy
in her own right.” Who can set a braver example than our
Paetus? He collects twenty million and gets on with his life.

The third version of the elegy is also included in the translator’s selection for Mea Roma, and comes from “Book X, 61” some ten years after the two earlier compositions. Scholars have it that this poem is from one of the last books of the Epigrams that Martial composed before leaving Rome and returning to his native Spain to live out his last years. More condensed, though no less moving and refined a lament, “Book X, 61” reads like an epitaph on a child’s gravestone, addressed to whomever comes into possession of this plot of land after the poet has moved away:

Here rests Erotion’s hurried shade, robbed
of life by fate and her sixth winter. Whoever
owns this little plot after me, make an offering
to her small ghost each year. Then, may your
household endure, safe and untroubled.
Let this stone be the only sorrow on your land.

It might be useful to quote one more poem from these later books, “Book X, 63,” appearing right after the above in Mea Roma. Like the third Erotion elegy, it too uses the conceit of a gravestone inscription, as both of these late epigrams point to the form’s probable origins in Greek poetry as tombstone epitaphs. Here Martial is at his witty and scabrous best, undercutting any sentimentality for the aged matron. The poet leaves us with a bittersweet admiration for the lady, not only for her advanced years, but for what she has seen and endured with a quite remarkable vigor and dignity. Just when the reader is full of good feeling and somewhat complacent in the poet’s praise for this fine example of everyday Roman virtue, Martial twists the sentiment in his conclusion—making, in the simplest, colloquial terms, his elderly subject all the more sympathetic:

This gravestone you’re reading may be small,
traveler, but cedes nothing to any mausoleum or
pyramid. I attended not one, but two Saecular
Games, sixty four years apart, and never lost a step
until my dying day. Juno gave me five boys and as
many girls, and every one of their hands
closed my eyes. My marriage was a glory to
behold, and I was faithful to just that one prick.

It goes without saying that any contemporary English reader’s knowledge of Martial is dependent on the translator’s skill. In the above, for instance, Beck uses what, in his introduction, he terms an “invisible footnote” to clarify an apparent inconsistency for the contemporary reader. The problem is that the Secular Games were supposed to be at least a century apart and, if so, Martial’s persona would be making our Roman matron’s declarations quite laughable. However, Beck tells us that Claudius held special Games in 47 C.E. to celebrate the eight-hundredth anniversary of Rome’s founding, making it sixty four years after Augustus’ 17 B.C.E. Games, and certainly in line with the character of his persona. Thus, Beck creates his “invisible” note by rendering the lines: "I attended not one, but two Saecular / Games, sixty four years apart…"

Work as outstanding as Art Beck’s in Mea Roma, as well as his choice of epigrams, reveals the Latin classic not only in a new light, but with the full range of values that characterize the original. Beck’s is a poet’s translation, and a great one at that, demonstrating the work of a contemporary speaker of American English who has come to live with the canon of a Roman poet from the first century C.E. Art Beck has not only discovered contemporary poetic equivalences for Martial’s verse, but has achieved, in Mea Roma, that rare distinction of speaking through Martial, creating new American poems that give life to a 2,000-year-old imagination.