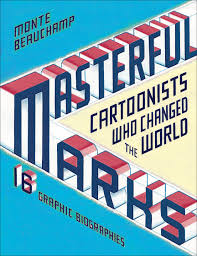 The idea that comic artists have worthwhile biographies has become an object of the upscale sector of the book trade, with gorgeous volumes reminding collectors of the greatness of creative giants along with healthy selections of their work. Masterful Marks, in its lush four-color pages, offers something different. The artists who have rendered these sixteen stories of their heroes are not constrained by precise biographical accuracy. Their intention, rather, is to get into the brains and hands of these remarkable figures, and each artist has his own method of madness to do so.

Not all the adventures here are, strictly speaking, about the objects of study and artistic experiment. Drew Friedman’s “R. Crumb and Me” is heavy on the latter subject: how he grew up as a pre-teen, hoarding the forbidden Crumb comics of the later 1960s while still under ten years old himself; how he inveigled himself into the company of Crumb’s mentor, Harvey Kurtzman; and as the years go on, how he sees Crumb in old age. So much had been detailed about Robert Crumb in the ’90s film Crumb, not to mention the artist’s own self-revelatory drawings, that perhaps there was no need for a more intense biographical treatment.

Kurtzman as an object of wonder is subjected, by contrast, to intense factual scrutiny. Artist Peter Kuper wants to get as intimately close to the subject as nearly fifty close-drawn panels in six pages can manage. The conceit of the piece, that Kurtzman is himself a survivor of his times if not the actual “corpse on the Imjin” (the subject of his most intense story on the tragedy of the Korean War) becomes wonderfully suggestive. Kuper makes one feel that Harvey, with his personal triumphs and tragedies, is the story of comic art at its highest level of achievement.

It is well known that comic artists (or “cartoonists” as the subtitle of this book has it) have been a solitary, often bitterly unhappy, lot. Most of them, like Charles Schultz of “Peanuts,” were plain lonely. Like their fellow newspapermen and pulp writers, quite a few had a drinking problem and ragged careers. No one offers a better example than the inventors behind Superman, Jewish teenagers Jerry Siegel and Joe Shuster. A collaborative effort between the book’s editor Monte Beauchamp and artist Ryan Heshka, their story is packed with lurid details of the creators falling into the hands of ruthlessly exploitative pulp publishers who cheat them out of millions while Superman “leaps tall buildings with a single bound” in sales. A depressed Shuster turned to S&M pornography as the legal case dragged on. The two had created an industry and received, in the end, $20,000 per year for what remained of their lives.

Marc Rosenthal delivers on Charles Addams, an eager beaver with commercial success in mind from early on, but afraid of tight spaces and in love with medieval weapons. By 1938, he made it at the New Yorker—with the macabre touch that never left him. His success went on, even to a 1952 exhibit at the Metropolitan Museum, and his personal life was a match for his art, including a wife who took all the rights to his work and a girlfriend whose previous lover, Nelson Rockefeller, had died in her arms. Addams drank heavily, but it was the cocktail age, after all, and he was buried in a pet cemetery, which seems just right. Rosenthal notes in passing that for Addams, the captionless cartoon was the ultimate art form, and he has a point.

Beauchamp also supplied the script for artist Owen Smith to depict Lynd Ward, the master of comics’ silent film, i.e., the woodcut novel. A recent, excellent documentary, following a Library of America set of Ward’s best work (annotated by Art Spiegelman) has brought the remarkable artist back, and the sepia drawings of Smith are more than equal to the task. Ward’s father was a socialist preacher of wide organizational influence and young Lynd studied under the graphic greats in 1920s Germany. He had ample personal tragedies along the way, but Lynd’s half-dozen “wordless” novels are classics of the field, his later career (the novels made no money) as children’s artist a fabulous success. Hardly anyone knew of his earlier work when Will Eisner praised his accomplishment in 1978, the same year Alzheimer’s took Ward.

Eisner, as it happened, was himself returned from obscurity, with a couple of good decades ahead of him, by comics publisher and sometime artist Denis Kitchen, who here contributes a fine piece on Theodore Geisel, aka Dr. Seuss. Geisel, a German-American lad growing up in Springfield, Massachusetts, was obsessed early on with rhyming. Prominent Boy Scout, he was to be awarded a medal personally by President Theodore Roosevelt who, however, ran out of medals at a crucial moment and cursed the boy, introducing Geisel to permanent stage fright. He was a suspended artist for the sin of drinking in Prohibition-era college, drew for the humor magazine under pseudonyms, later invented the rumor that he created comics with his feet, and made it into the comic strip dailies before being personally fired by William Randolph Hearst (Geisel was a militant anti-fascist and Hearst an admirer of Hitler, for a while anyway). Like several others in this book, Geisel found a calling in kids’ books, through one bigger than anyone else: The Cat in the Hat alone sold eleven million copies, with much, much more to come. Geisel chain-smoked himself to death but never lost his antic, quietly egalitarian and ecological sense of humor.

There are other items here, like Gary Dumm’s delightful treatment from Beauchamp’s script of the life of Hugh Hefner (who fancied himself a cartoonist and tortured Harvey Kurtzman by blue-penciling “Little Annie Fanny” for decades); Dan Zettwoch’s study of Osamu Tezuka (one of three non-Americans in this book, and the only non-white); Arnold Roth’s suitably strange take on Al Hirschfield; and above all, underground comix maven Frank Stack on nineteenth century Swiss artist Rodolphe Töpffer (another non-American).

The pages on Walt Disney by Beauchamp and Larry Day I find unsettling, perhaps because the political complications, everything from Uncle Walt’s personal anti-Semitism and anti-unionism to his major role in the Hollywood Blacklist, feel a little too pressing to me—but there are also plenty of good things to say, and they are said here. For similarly political reasons, I do not take so much to Nora Krug’s tale of French artist (the final non-American) Hergé and his creation Tintin, nor to Mark Alan Stamaty’s Jack Kirby, who suffered war trauma but spent a lifetime glorifying war and inventing, then re-inventing, our current superhero banality.

Never mind. This is a magnificent volume, its individual contents far from needing the reader’s fondness in every case. Reader, look for it, drink it in. Feel lonely with these fellows, and admire them for their accomplishments.