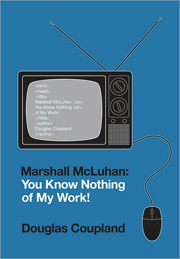 To call Marshall McLuhan (1911–80) a media prophet, albeit a reluctant one, is not news. The works by which he is known, includingThe Gutenberg Galaxy, Understanding Media, and The Medium is the Massage, are not much read anymore; on a superficial level, they have left two time-worn bytes: “the medium is the message,” and “the global village.” That he was also an ambitious scholar, a devout Catholic convert, and someone apparently much further along the autism spectrum than most of us may be fresher information. So also McLuhan’s modernist credentials (he was an ardent fan of the linguistic shenanigans of Joyce’s Finnegans Wake, an acquaintance of Pound’s, and a friend of Wyndham Lewis’s), his flirtation with New Criticism, and his study with the literary critics F.R. Leavis and I.A. Richards. This short biography, by a writer known especially for his novel Generation X, is keen on linking Marshall (as Coupland usually calls him) with today’s digital world.

The occasional interposition of other material—entries from an internet name generator, a test for autistic tendencies, descriptions from used-book databases, MapQuest directions, Gmail’s automatic suggestions, YouTube comments, a few typographical flourishes, etc.—helps this biography meet its hipness quota. At the same time, Coupland adheres to standard biographical procedure, with the conventional structure of a lifeline (birth to death and the stages in between), various subplots (the mama’s boy, career intrigues), the roughly sketched social and political background, and even some overt autobiography.

About Coupland’s writing, there is good and bad. It is rich in idiosyncratic and refreshing formulations like “fame curve,” “prude loop,” “Technicolor pimpings,” “Muppet Kremlin,” and “academic Smurfpolitics”; it postulates the brain as “an enigmatic beige pudding” and McLuhan as “an information leaf blower.” On the other hand, while cliché can be effective when used in moderation, Coupland pours it on, veering dangerously toward the trite and even maudlin. For example: “Marshall . . . You were in the right place at the right time, and it wasn’t random. How do any of us end up being fascinated by some things and not by others? And why do so few of us do the things we like doing? It was an adventure, Marshall, and wasn’t it grand?” The overuse of cliché tends to weaken assertions like “had Marshall not been born, there would have been a hole in the world. . . . We are only better for his having been alive.”

Furthermore, Coupland exhibits relative cluelessness about the life of the mind. After describing McLuhan, the young instructor, as “a skinny guy who seemed prematurely old, who talked only about religion and literature, who had no listening skills,” he asks: “This was the guru whose ideas would revolutionize the way we see the universe?” And: “That Marshall ended up becoming what he became as the result of studying a sixteenth-century English satirist, rhetorician, and critic is as freaky as if he’d studied Easter rituals in medieval France and emerged at the end as a rocket scientist.” But several pages later the steps are logical and clear. While the ivory tower with its blinkered academics often deserves dressing-down, Coupland too readily (is it defensively?) descends to caricature and poor generalizations. The academy was where McLuhan spent most of his life, and where he belonged.

No doubt, keeping the biography of a major figure and formidable intellect brief is difficult. But even though Coupland suggests the reader fill in some blanks with Wikipedia, this does not relieve him of the burden of appropriate selection and omission. He still needs to engage at some depth with the key ideas and thinkers that shaped McLuhan; unfortunately, he shows little evidence of having done so (with, for example, Alfred North Whitehead or G. K. Chesterton, though Dagwood Bumstead gets more than his due). “Heady stuff!” he exclaims.

Surely there is a connection between McLuhan’s work and ways to think about today’s world of instantaneous communication and information. But mere reassurances that he is important, “more so now than ever, because he saw this coming a long way off, and he saw the reasons for it,” are not enough, nor are mentions of Baudrillard, Barthes, Lacan, and Foucault. Little or no substantive explanation is marshaled for support. Coupland writes, on the one hand: “Dear God, he would have enjoyed using the internet.” On the other hand: “Society was absorbing too much technology too quickly, and he knew it. Did he like this? No! He hated, loathed, abhorred it. . . . How the man ever came to be perceived as technology’s cheerleader is a mystery.” Yet he too is complicit, as though he wants it both ways.

Coupland’s sympathy with his subject is plain—in their medical history, their nationality, and even in their unbidden (and maybe inappropriate) elevation to spokesmen for a generation. Unlike the hapless, snooty professor in Woody Allen’s film Annie Hall—whom McLuhan, in a brief cameo, famously rebukes with the subtitle of this book—Coupland surely knows something of his work. But is it enough?

As the book has keyboard commands as a structural device, using “return,” “command . . . shift,” and “escape . . . control” as headings for its three major sections, I have pondered using those other commands, “enter,” “delete,” and “option/alt,” for my criticism. But even while Coupland’s book leaves many questions frustratingly unaddressed, it has its merits, and effectively conveys some of McLuhan’s complex fascination. It has led me to dust off books long dormant on my shelf (especially The Gutenberg Galaxy, “one of the most brilliant books on books and the effects of print and reading ever written”), and to read them with new awareness. Maybe, after all, that is enough.