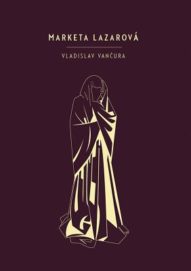 When one considers the early 20th century literary works of Czechoslovakian writers, the names that come first to mind are Karel Čapek, Jaroslav Hašek, Franz Kafka, and Richard Weiner. Their contributions to Modernism (and, especially in Kafka’s case, to how we regard the world) are noticeable and undeniable. In apparent contrast is Marketa Lazarová (1931), which may initially look like a throwback to an earlier style and mode of thinking than that possessed by Vladislav Vančura’s aforementioned contemporaries. This is partly because it is set during an unspecified time in “the Mladá Boleslav region of Bohemia, during a time of trouble, the king struggling to maintain the security of his highways, facing severe difficulties with the literally criminal conduct of the nobles. . . .” What’s presented are the rough lives of brigands—chiefly the family and followers of the robber and patriarch Kozlík, and secondarily those of another highwayman, Lazar—and a captain of the army, Pivo, whose duty is to end the career of Kozlík by assaulting his forest stronghold in the dead of winter.

The frequent references to God, along with quotations and examples from the Bible, might also contribute to making the novel seem out of step with Modernism. Internally, those things have little sway on the nature of the criminals. “Not even the Lord’s commandments would they heed,” says the narrator of Kozlík’s gang, and the matriarch, Lady Kateřina, in stunning certitude, blindness, and self-importance, believes “in Jesus Christ, I long for Him without pause. If only He had been a guest at my wedding, if only I lived in my old matrimony in Heaven. . . . [Kozlík’s] soul,” she continues after he has been captured by Pivo, “will ascend and alight with the souls of the just on the robe of the Loving Judge, as bees alight on the robe of the beekeeper.”

Throughout Marketa Lazarová there is the contest of strong men—Kozlík and his son Mikoláš versus Captain Pivo—as they jostle for supremacy. The Lazar family becomes more entwined than ever with their fellow brigands when Marketa, their fourth daughter, is taken by Mikoláš as recompense for damages to his person and his honor. She is understandably unhappy with this—“See her take a step back and tremble with horror”—but fairly quickly finds herself less torn between a once-upon-a-time imagined future where she would take the veil and the experience of violent sex that introduces her to sensual pleasure and, eventually, love. For not being totally consumed by guilt at enjoying her lover, Marketa is seen as a “slut” and a “harlot,” just as Alexandra—another of Kozlík’s children, who falls for a German count named Kristian—is called by that man’s father a “trollop” the moment he sees her.

If that summarized the entirety of this novel then there would not be much to commend it, but more is going on. Vančura (1891-1942) was a successful short-story writer and novelist who belonged, throughout the 1920s and 1930s, to an avant-garde group of artists; he was also a filmmaker, and in this novel he sweeps from panorama shots to close-ups of the principals while deflating the pretenses of the earlier time period. No sooner has Kateřina spoken of Christ then the narrator undercuts her hollow piousness: “What’s this? Speaking to brigands of the Kingdom of God? For in truth, I am not sure whether this is the best fount from which to draw instruction for these lads. They dig at the earth with heel and sword, and not a single one lifts his eyes from the ground.” Her children are earthbound and rarely look to Heaven, and in this respect they cannot be saved.

In one of many asides addressed to the reader, the narrator stops describing events to speak of the content of the story: “What’s that, this tale of bygone days is not to your liking? Don’t you take even a smidgen of pleasure in hearing about frosts so bitter, about men so impetuous and ladies so comely? Compared to the delightful complexities of modern literature, don’t you find this tale as smooth as a threshing floor?” Present-day readers might find it harder than Czech audiences did in 1931 to appreciate the slyness underneath the depictions of Bohemian battles and to see the modernity in the at times belittling, at times ambiguous, references to abstracts or higher powers (God, the Church, Imperial rule), though the self-awareness of the narrator will jump out. When Marketa Lazarová was first published Czechoslovakia had existed for only thirteen years, its creation due to the negotiated peace that followed the First World War. Today we might read the hostility and bitter words about sovereign might, soldiers, and cruel customs of earlier times as expressions of a healthy distrust towards any authority, such as those who governed empires and led them into a long-lasting bloodletting.

In the 1920s Vančura was a member of the Communist party, but membership didn’t last the decade. In the late 1930s he joined the resistance movement against the occupying German power. Captured by the Gestapo in 1942, his life ended when the Nazis killed a great number of Czechs following the assassination of Reinhard Heydrich, Deputy Reich Protector of Bohemia and Moravia (parts of the by-now former Czechoslovakia). In those roughly twenty years his output of novels and short stories was constant, with Marketa Lazarová one of his most popular. As Vančura is seldom rendered in English, we are fortunate to have so lively a work now available.