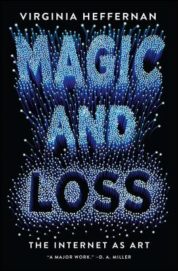 The basic premise of this offbeat volume, which mixes a dishy personal voice with one of wonderment and relish, is that the Internet, which has made so many things—corded phones, ticket counters, socializing—disappear, has also left in its wake a deep sense of the loss of the world those things once defined. Moreover, these seismic cultural shifts have happened with such breakneck spontaneity that, given such an accelerated, technologized hunger for converting the “brick and mortar” world into prosthetics for the distant user, such a sense of loss is not only palpable but transformative. Questions adhere: what have we gained from it? Is it sustainable? Why do we love it all so much?

Heffernan, a New York Times Magazine regular, spends much of the book weighing the gains and losses of our information age in all its digital-versus-analog splendor. She's deft at plying forth the essence of these questions and presenting the outcomes on a moving, human scale—for instance, when she discusses how much she used to think about “people who rhythmically and mysteriously inhaled and exhaled cigarette smoke while they talked or left long silences or didn't hang up immediately after saying goodbye.” Doubtless, soon it will be hard to remember why people smoked tobacco, with all its aromatic, jittery pleasures. Not only has that emotional indulgence faded from public view; fading too is our general register of the human body, with all its breathy, smelly, analog presence. Digital communication has scooped out all the subtlety of “over- and undertones” of mediated experience and reduced the magic of a living presence down to the transactional expectation of information exchange.

In much the same way, YouTube for Heffernan is a home for the “vernacular avant-garde,” and her descriptions of the early 'net in all its BBS glories are salutary for those who used to poke around in virtual hangouts like The WELL. This basic joy translates, by extension, into the immediacy of the availability of information, as in her depiction of a required Formal Logics course in philosophy, which fortuitously came with computer lab access. There, she could drop a "tablet of ecstasy" and explore “without emotion the inconsistencies in my twenty-two-year-old applications of ancient principles of modus ponens and modus tollens to Ps and Qs, to see the formality of it,” and thus how these systems allow the patterns of life to reveal themselves. Those minds compelled to grasp such mysteries find their own way to them, of course, but Heffernan's detailing of her course is part of the logic here, of the longing for connection that feels engrained into the fiber of becoming a person. That alone is enough to recommend this book for those curious about what life was like before we had machines to remember human history for us.