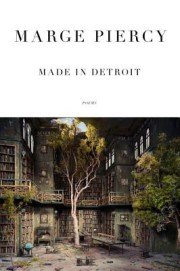 Some may ask how a writer with nineteen books of poetry and seventeen novels can have anything new to say, yet Marge Piercy’s newest book, Made in Detroit, is one of her most compelling. These poems are richly layered with unforgettable imagery and succinct narratives. While foremost a memoir about her childhood, there are poems about her Jewish heritage, the sea, the environment, love and socio-political issues. Each poem is a polished gem—descriptive, sensual, and deeply personal.

Many of the poems continue themes from her 2002 memoir Sleeping With Cats. In the title poem about her childhood in Detroit, she reminisces about her family’s poverty, the grittiness of the city, and her love of literature. “I dived into books . . . I suckled Detroit’s steel tits.” In “Detroit fauna” she reminds us that she grew up in a time that was sometimes more like the 19th century: “I am old enough to remember the sad / horses that pulled open-sided carts.” And “Things that will never happen here again” speaks of the toil and hardships of the World War II years. Here, Piercy reveals a profound awareness of aging:

I miss none of this. They were chores
not pleasures, but still I remember
and my age hangs on me like icicles
that bear down the branches of pine.

Piercy’s poetry is rich with images of the natural world. At times, as in “Little house with no door,” she is as elegant as Frost:

For decades it stood in the oak woods
not on any road but found only
by an old path half grown over:
a one-room house with no door

Several of her poems are about the sea, a ubiquitous presence where she lives on Cape Cod. In “The constant exchange,” one of the finest poems in the collection, she is reminiscent of the prophet Micah: “The ocean gives; the ocean takes away.” The poem is matter of fact as she speaks of the environment and of class disparity in the same breath:

The sea is restless and greedy. It mocks
the summer people with their million
dollar houses . . .
. . . chews them up to splinters, then
tosses their flotsam away . . .

Above all, Piercy writes lines that are so beautiful they bring tears. “The frost moon like a stone wheel / rolls up the sky,” she says in “The frost moon”; “The moon is a fishhook of bone.” With Made in Detroit, Marge Piercy has shown that she can still write narrative and lyrical poetry as good as any of her past verse.