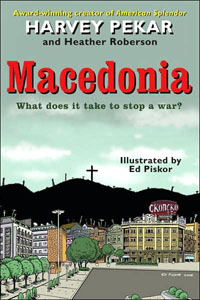 Harvey Pekar’s newest book, Macedonia, is a nonfiction account of the travels and observations of Heather Roberson, a UC-Berkeley graduate student, in the Balkan nation of the book’s title. She visits the country to research her peace studies thesis, in which she is building the case that war is not the unavoidable facet of human existence most people believe it is. Her interest in Macedonia stems from the unusual fact that the country, sandwiched between Albania, Serbia, Bulgaria, and Greece, managed to secede from former Yugoslavia in the 1990s without sparking a civil war. The sociopolitical environment that allowed this historical anomaly—secession without violent conflict in a region riddled with violence and instability—is what Roberson wants to investigate.

Roberson is an idealist, and her thesis is idealistic, so it should come as no surprise that she has a hard time gaining traction with the people she interviews in the book. But she is not naïve, and both her beliefs and the book itself are impressive for the integrity and rigor of the research they demonstrate. Put your thinking cap on before cracking this one, because you’ll need it; the big ideas come fast and furious, and they never let up over the course of 140 pages.

The story follows Roberson from her comfortable grad-school life at Berkeley to the gritty streets of Belgrade, Tetovo, Skopje, and Pristina. By night, she crashes on friends’ and colleagues’ couches, and by day she tirelessly conducts interviews and debates with government officials, university staff, expatriates, and others. Not everything goes according to plan, of course, and the book does a nice job of capturing the giddy anxiety of being a lone traveler in a distant foreign country, complete with the occasional awkward interaction and mildly threatening episode.

So how did underground comix legend Harvey Pekar get involved in this project? Roberson was introduced to him in 2003, prior to her trip to Macedonia, at the time of the theatrical release of the film adaptation of American Splendor. Having always harbored an interest in politics and being free, thanks to the financial success of the film, to essay riskier subject matter, Pekar invited her to take notes during her trip that he would use as source material for a new book. He used them to create his signature stick-figure storyboards, which were passed on to comics artist and creative workhorse Ed Piskor to interpret and illustrate.

The result is a bracingly intellectual analysis of the history and culture of Macedonia and the surrounding region. Covering historical and political territory nearly identical to Joe Sacco’s Safe Area: Gorazde, Macedonia is similarly challenging and eye-opening. But whereas Sacco’s storytelling style is kinetic and character-driven, Pekar’s sometimes sags under the weight of its relentless wordiness and intellectual distance. Many of the panels, and indeed entire pages, are literally overrun with text. This is likely due both to Roberson’s background in academia and the three-person creative assembly line that produced the book. Fortunately, at least the academic leanings are transcended by the book’s spirit of engaging with real people in the real world. Despite ingredients that could easily have made Macedonia ponderous and didactic, ultimately, it is neither.

The artwork, by up-and-coming Pittsburgh graphic novelist Ed Piskor, who had previously worked with Pekar on Our Movie Year, is done in bold black and white, adhering largely to standard indie comics style. Small panels portraying slightly caricaturized faces and body movements give way on precious few occasions to beautifully rendered full-page spreads. Though young, Piskor is an accomplished artist and his art serves the narrative well. Unfortunately, it is also entirely in service to the text- and dialogue-heavy narrative. Piskor was apparently given carte blanche by Pekar to set up each scene however he wanted as long as he preserved every word of text. Within these limitations, Piskor does a commendable job. He never gets lazy and falls into a repetitive talking heads approach, though there are stretches that veer towards tedium.

Macedonia is definitely a departure for Pekar. It doesn’t sport the acerbic wit or underdog heroism of autobiographical outings like American Splendor or the more recent The Quitter. On the whole, Macedonia is easier to admire than to enjoy. Harvey probably wouldn’t even mind that; I don’t think he has any interest in making things easy. In fact, the very concept of “the path of least resistance” is what is under attack in this book. Foreign cultures can be inscrutable, differing customs and mannerisms can make trust and open communication difficult. Buying into the divisive stereotypes that fuel ethnic conflicts is made much easier when the “enemy” is an abstract concept rather than a living and breathing individual.

Despite the tenuous peace in Macedonia, ethnic tensions between Macedonians and Albanians in the region are at a constant simmer and threaten to boil over at any time. With wars of varying sizes continuing to rage in other corners of the world, never has it been more important to consider any and all possible routes to peaceful resolution of conflict. Which is what makes this entire project, shortcomings and all, inspiring and important. Roberson, Pekar, and Piskor rolled up their sleeves and really got to know the individuals who inhabit this country so they could tell their story.

Harvey’s die-hard fan club will no doubt seek out this book, but in some ways he and Roberson are waging a quixotic battle. Some folks will be alienated by its sheer verbosity and others will simply reject its premise. At the last page, after the audience has winnowed, perhaps only those idealists who already share the authors’ view of the world will be paying attention. If that is indeed the case, it’s too bad, because Macedonia makes a morally uplifting and, more importantly, qualitatively convincing case for what can be accomplished through the right combination of starry-eyed idealism and educated inquiry. There’s no denying that the world would be a better place if more artists, more people in general, and above all, more heads of state, would set their expectations so high.