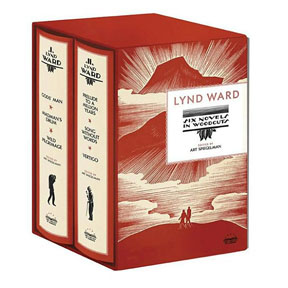 Comic art must finally be coming of age, if the distinguished Library of America boxed set edition of six novels by famed woodcut artist Lynd Ward is any indication. Not that Ward, a professional illustrator and industrial arts teacher, would likely have considered himself in the same field as George Herriman, Al Capp, et al.—popular comic strip artists read by millions daily in newspapers during the 1920s through 1940s. But the invention of the “graphic novel” (a name affixed to comic art of a longer kind) has raised the profile of those storytellers who utilize pictures, while the rapidly changing nature of the book itself prompts new questions about form and content alike.

Eight or nine decades ago, the “wordless book” or woodcut “novel” minus dialogue was a small-scale rage of the European avant garde. The Belgian artist Frans Masereel’s narratives, heavily influenced by German Expressionist art and accompanied by famed novelists’ introductions to his books, seemed part of a genre upswing that never quite happened. Hugely popular daily strip artist Milt Gross published He Done Her Wrong in 1930 and might properly be called the first American graphic novelist, at least the first not working in woodcuts. It wasn’t a big hit, but was followed by half a dozen similar experiments (the most intriguing by Communist cartoonist and Depression painter William Gropper, about a romantic triangle among trapeze artists) that were not hits either. Comic strip icon Will Eisner, prodded back to drawing after a thirty-year departure, made the graphic novel respectable decades before Art Spiegelman’s Maus: A Survivor’s Tale became compulsory reading for youngish hipsters and vernacular-minded Holocaust devotees, but in both these two cases, definitely with words. Peter Kuper, who took over the “Spy vs. Spy” pages of Mad Magazine when the original artist passed, is arguably the most admired continuator of wordless comics today. Kuper’s sometime collaborator Eric Drooker, who drew the comic art for the recent Allen Ginsberg biopic Howl, would be next in line.

This particular telling leaves out Ward, a sui generis talent and a bit of an enigma, perhaps to himself as well as to his readers. Son of Harry F. Ward, a roaring radical minister regularly among the clerics that the American Right most loved to hate, Lynd also despised oppression, regarded the Depression as a crime by big business against working people, and certainly hoped for a better world. But he doesn’t seem to have expected it. There was always something deeper than social issues in his work, something both spiritual and artistic with no redemption in sight. He believed, as much as all this, in the perfectly designed book as complete art object, founding a cooperative press during the 1930s that produced limited editions of sixteen volumes, not all his. Perhaps it is also characteristic that in later years he was a genius illustrator for children’s books, winning a Caldecott prize in 1953 for The Biggest Bear.

No more perfect editor of his work could be found than Spiegelman, and along with an introduction to these volumes, an interview with Spiegelman on the Library of America website provides an illuminating background and commentary. He observes (and perhaps only a fellow artist would see it quite this way) that Ward set out for himself tasks so difficult that when he had completed them and meanwhile experienced promising commercial offers for illustration (his work on Moby-Dick remains a classic, if out of print; and on Frankenstein happily available), he abandoned woodcut novels altogether. But what he had accomplished by then!

God’s Man (1929), Ward’s first realized work, is among his darkest, shadowed by the execution of anarchists Sacco and Vanzetti two years earlier. An artist’s odyssey altogether lacking in irony, it is, as Spiegelman observes, nearly medieval in its starkness and moral tone (though Susan Sontag later icily classified it as “camp”). Madman’s Drum, appearing the next year, was artistically as well as narrative more complex—in fact so complex that one may get lost in reading it. But one is not likely to miss the central point: this book is about race, slavery to colonialism, and the effects of racism upon a whole social order. Rich men debauch, even as they keep their own ladies pure and ignorant. Wild Pilgrimage(1930), with assorted pages in what the artist called “off red,” begins a path upward in style that would be more recognizable in a few years, when New Deal mural projects of toiling workers and farmers would spread across post offices and public buildings. Ward’s images are far too radical and challenging for government sponsorship, of course.

Prelude to a Million Years (1933) would remain Ward’s signature volume, partly because there seems to be so much of the artist himself in it than in his earlier works, but also because an aspect of American society had caught up with him. In it, a sculptor moves through the world of horror and devastation, dealing with war, brutally repressed strikes, failed love (he find his woman on a bed, passed out, empty bottles around), and desperation . . . but perhaps there is also hope in his capacity to create at least a physical representation of the life-giving woman (or goddess). We see her again in Song Without Words(1937), this time driven from paradise without reason, separated from some children (her own?) by barbed wire and a Swastika, but still seeking redemption, seeing images of skulls and approaching death before a somewhat forced conclusion. And finally in Vertigo, published in the same year as Song Without Words, Ward may have reached his aesthetic goals. Deeply complex, it is divided into three sections, with “The Girl” subdivided by years; “An Elderly Gentleman” by months; and “The Boy” by days of the week. Grim fate rules with no happy endings in this saga of hope set against poverty and the clash of unequal forces in the inevitable class conflict.

It would be unfair to describe Ward’s work as a variation on these themes, but like other Left-leaning artists at the time, he was encompassed by the New Deal narrative and with good reason. The threat from Fascism abroad (mirrored by the lynchings in the American South), the articulation of grand hopes from the White House and assorted social movements for a society moving toward a higher form of cooperation and collectivity, and unprecedented government sponsorship of arts: these were powerful in ways unprecedented (and, so far, not repeated). Yet the flip side—not only the persistence of capitalistic cupidity, racism, and abuse of women, but the deep depression of the artist or any sensitive soul, often bordering on suicide by methods fast (the gun) or slow (mainly alcohol)—never seems far away. The memory of the First World War, unparalleled in its barbarity and sheer stupidity, is never far from Ward’s art. Until Pearl Harbor, the American public largely agreed, appropriately blamed the empire-builders and President Woodrow Wilson for that war, and lent confidence to Ward’s dark lines.

Spiegelman, unarguably the most influential living artist uplifting “comics” into “comic art,” is perhaps right to say that Ward turned logically to other work after 1940. But as the excellent anthology Wordless Books: The Original Graphic Novels (Abrams, 2008) demonstrates, the small field faded away altogether mainly because the historical moment had passed. Later evocations of the New Deal mood, politically or artistically, have been just that: evocations.

Why, then, did wordless novels return, at least a few of them, a half-century later? The answers may once more be highly personal, but with the rise of “classic” comic art reprints since the 1970s and the global spread of visual information, Ward’s work would inevitably become far better known. At any rate, Eric Drooker’s 1992 volume Flood! A Novel in Pictures may be seen in retrospect as the breakthrough. Beautifully done, tragic and Ward-esque in its odyssey of big city life, it seems to have inspired, in turn, a small flood of other such work, mostly as pieces within anthologies or journals (such as the “Wordless Worlds” issue of World War 3 Illustrated, in 2009) with various artists trying their hand.

Drooker, who met poet Allen Ginsberg during anti-gentrification campaigns of the Lower East Side in the 1980s, was the perfect candidate to create the art for the animated sequences of the film Howl. Ginsberg was anything but wordless himself, and yet there is so much to the silences and the spare phrases of his most famous poem. Drooker’s multicolor exploration goes within and beyond the particular poetic passages themselves, and is available in book form as Howl: A Graphic Novel (Harper Perennial, $19.99).

We may need to go back to 19th-century illustrated books to see the like, or perhaps illuminated editions of the Bible, or perhaps we should throw out all the possible analogies and begin anew to interpret what the rush of comic art means to a semi-literate young public today, and why the multiple legacies of an almost forgotten artist like Lynd Ward would suddenly re-emerge after all this time. Whatever the reasons, we may be at a moment when the modernist division of text from images is in serious collapse. After that, anything is possible.