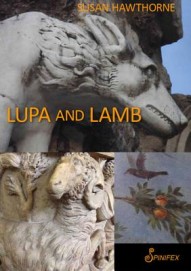 Empress Livia is having a party! While in Rome, her guests take in the sites. Curatrix suggests the Musaeum Matricum, which is “a place of the Muses/a musing place of the [f. pl.] Matrix/Mother/Source,” where she, as curator, has gathered the “lost texts.” These lost texts, places of interest, and partygoers and their stories are classical fodder for Lupa and Lamb, a book that celebrates women and offers an alternative to how history has perceived them. In Australian poet Susan Hawthorne’s imaginary world, Lupa (wolf) is not the predator and Lamb is not the victim:

Hawthorne is a master-weaver. Her sixth book of poetry takes strands of myth, history, and new inventions to make a strong fabric of sisterhood. She uses border crossings like fibres to make a single braid: geographical, corporeal, and temporal boundaries cross each other as women of antiquity contemplate Wikipedia, characters morph into one another, and human becomes animal. As a published novelist and nonfiction writer, Hawthorne also uses the threads of other genres, making a tapestry of narrative form.

Continuing along the lines of Hawthorne’s Cow, which was shortlisted for the Audre Lorde Lesbian Poetry Prize as well as Australia’s 2012 NSW Premier’s Literary Awards, Hawthorne’s verse mixes the academic with the creative, using marginal notes and providing a bibliography for those wanting to know her sources. These add to the experience of reading Hawthorne’s work; one can expect entertainment, experimentation, and erudition in her art.

Finding the balance between the academic and creative is one of her distinguishing traits as a poet, second only to her feminist refrain. In “crimes of men” she writes about Romulus, who

considers his power celestial
forgets that he started life
in a wicker basket on a river in flood
that he might have been food
that his life took a good turn
because of an alliance between
she-wolf and shepherd.

In this passage, Hawthorne gives her readers the opportunity to revisit the virile history we have come to know as “truth” and question its wholeness by reaching for the feminine, and it would appear the feminine is not hard to find; it has always been there.

Lupa and Lamb is an original book, illuminating and imaginative. To read it is to open your mind to an alternative past and, in doing so, make room for a future full of possibilities.