Reflecting on Vestige in Provence and Languedoc 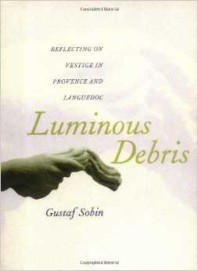 In Luminous Debris, expatriate American poet and novelist Gustaf Sobin sifts the remnants of the past for the "mirroring images they might provide" to the present. For Sobin the artifacts of lives lived in the midst of the ongoing allow us the possibility to situate "ourselves in regard to our own evolving." Sobin walks Provence and Languedoc in search of the "luminous debris" that might provide the possibility of a "vertical reading" of the landscape and a "deeper, more arcane set of cognitions." The twenty-six archeological/anthropological essays in this collection span a history of over four-hundred-thousand years, and each is a mirror made of language within which we might recognize ourselves in the reflections of our predecessors and perceive our inseparability from all that has come before us.

Sobin's gifts as a poet make each of these essays rewarding in the same way good poetry is rewarding: no amount of reading can exhaust their richness or their possibilities to offer further suggestion. Consider "West-Southwest," a meditation on Neolithic burial chambers. These massive structures of piled stone "seem to draw, to magnetize unto their assembled masses all the chthonic forces of their immediate surroundings." The dead are placed in these collective sepulchers as if lain in the depths of the vegetal cycle itself, and are made to face the direction of the setting sun in order to be "addressed in the direction of their rebirth." Finally, however, the essay leaves us pondering death and burial as a kind of translation from one plane of existence to another, a discourse addressed in the direction of our own eventual reception. Readers of Sobin's poetry will find here a further reflection on themes from such major works as "The Earth as Air." Poetry and the rituals of death are reiterations of what is in the direction of what we hope will be. "[D]on't we ourselves bury our words, our very language, but only for the sake of their eventual resuscitation? That 'grain' might equal 'grain,' but only as a germinated entity: there on the far, the opposite, the facing side, that is, of the intervening night."

In "Undulant Oblique: A Study of Wave Patterns on Ionico-Massalian Pottery," Sobin discusses a decorative wave motif that appears on Ionian pottery in the sixth century B.C. as a reflection of the energies of an "originating vision." The parallel lines of this undulant script come to represent for Sobin the rhythms of a universe as encountered before "number" and "measure" come to intervene between an evolving humanity and a vision of its own origin in a "harmony of opposing forces." The potter incising these free-flowing, often erratic wave patterns was giving expression to "the vibratory flow of yet unregulated energies. He was, we might call it, expressing . . . in an ontological script, the calligraphy of Logos itself." For Sobin this vision of origin is not limited in time to the remote past; in fact it resurfaces and can be glimpsed in the philosophy of Nietzsche and Heidegger and in the poetry of our own period. Sobin discusses the briefly articulated Ionic vision of Being relative to Olson's view of the poem as a "high-energy construct." "Within that vision, the world (and the works by which that world is made manifest) erupts continuously out of an irrepressible point of origin." This eruption of Being into art provides even contemporary humanity with a potential point of orientation relative to the source of its own emerging.

"Votive Mirrors: A Reflection" examines the tiny mirrors discovered in Gaul that were once offered to Aphrodite or Selene either to ask the favor of the goddess or to thank her for a favor granted. It is here that we find a metaphor for the entire collection of essays and indeed for Sobin's use of the mirror image throughout his entire oeuvre. Mirrors, for Sobin, reflect not only the one gazing into the mirror, but "an otherwise invisible world of hidden realities." A mirror's reflection offers us not only our own image but also access to a mysterious otherness at the heart of reflection itself. That otherness is manifested in the votive mirror as a vision of the goddess in the mirror's reflection. "As her eye came to gaze on its own wobbling likeness, it might have encountered, in its hallucinatory fixation, that long-sought response. Out of the unfathomable depth of that depthless reflection, the divinity herself might have appeared, spoken, proffered her assistance."

The book's final essay is a reading of the Roman aqueduct at Nîmes as "kind of fragmented antique text." We watch the aqueduct through the centuries as it is transformed from a Roman "affirmation of existence itself" to a pile of debris to be scavenged and used out of "all established context," and once again we find ourselves reflected in this remnant of the past. "For how can we help but see—as if mirrored within this particular, historic complex—an image of our own collective breakdown?" The essays in this collection succeed not only in informing us about the past, but also in making us see ourselves as a part of it. The reader comes away from this book knowing that she has been changed through gazing intently at her own reflection in what initially seemed a distant otherness. What Sobin says about an Augustan bridge is true as well of our experiencing of this collection: "Here, in the given image, we might recognize the given reflection; in the 'one' acknowledge the 'other.' And, so doing, in this perfect set of reciprocities, undergo a certain sense of passage ourselves."