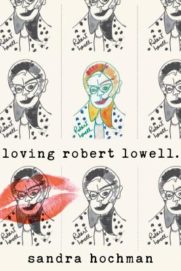 Sandra Hochman was an aspiring writer escaping a failed marriage when she met poet Robert Lowell in 1961. She was talented, attractive, and twenty-five; he was forty-three, famous, and charming as all get-out. What it took Hochman months to realize was that Lowell was also slowly slipping into one of his manic episodes (he was hospitalized repeatedly throughout adulthood for bipolar disorder), during which he often announced the end of his marriage and the start of a new life. Hochman was to be the center of the latest new life, and for several months a fairy tale of reading and writing together, mutual caretaking, and passionate sex filled Hochman’s days until, in the words of Lowell’s biographer Ian Hamilton, the “new bout of ‘elation’ reached its climax,” and Lowell returned to both the hospital and his wife.

Although Hochman is barely mentioned by Hamilton and not at all in Kay Redfield Jamison’s recent Robert Lowell: Setting the River on Fire (a study of his manic-depression), Loving Robert Lowell is testimony to the affair’s lasting importance to her. Perhaps best known for her 1971 novel Walking Papers, Hochman was remarkably productive and successful through the 1960s and ’70s as poet and novelist, then fell silent. This memoir (along with the republication of several novels) marks her return. It is not, however, a particularly auspicious return, for although the back cover promises a narrative “much more fabulous” than her fiction, a story written “in startling detail about [a] torrid and ultimately doomed affair,” what we get is less torrid than saccharine: “I felt as if liquid music had been injected into my veins. I was learning from the master”; “I just stared at [Lowell’s] reclining nude, white body with joy and aesthetic appreciation.”

Hochman is often self-serving. Her readiness to fall for Lowell is to be understood partly as the result of a bruising marriage and a troubled childhood (her parents divorce, and she is sent to a fancy boarding school). Nor, despite claiming she didn’t “move in literary circles,” is she shy to tell us how admired she was by the likes of Anais Nin, Stanley Kunitz, and James T. Farrell (to validate their acumen, several of her poems are included). Hochman is also eager to convince us of the good she did Lowell: she “was inspiring a genius to try new things” because she was “a woman that brought him youth and joy.” Much praise comes courtesy of Lowell, who tells her, among other pretty things, that her poetry has qualities he wishes his had and that before meeting her “he had never really enjoyed sex” but now found it “holy.” Hochman’s Lowell also frequently requires her intellectual help. She has to teach him what Dada was (“I explained that it had originated in Zurich”), and it is thanks to her, she hints, that he began writing plays.

Calling Hochman “Butterball” and cooing that she’s his “mommy bear,” Lowell begins to come across like the Mozart of Amadeus—as someone it is difficult to imagine creating the work by which we know him. Part of what mars the story of this folie à deux is the stilted prose, especially in what are presented as verbatim conversations, for Hochman is less intent upon verisimilitude than in assisting the uninformed reader. Thus, she tells Lowell that Grove Press publisher Barney Rosset “actually loved literature, as opposed to many of the other publishers who mostly saw publishing as a business,” and reminding Lowell of a review of his work by Allen Tate, she begins, “remember . . . Allen Tate, the poet and your friend . . .”

Certainly, the conventions of memoir ask readers to accept invented conversations as having occurred as recorded, and this is fine when Lowell is plighting his troth or querying Hochman regarding what the Beats are all about. It is a different matter when he is holding forth on poetry, for then one wants to be sure he said the things attributed to him. Unfortunately, faith in the accuracy of Hochman’s memory falters as careless errors accumulate: she was not the first woman to win the Yale Younger Poets competition but the seventeenth; there were no hippies in 1961; Norman Mailer’s book about the ’67 March on the Pentagon was not Why Are We in Vietnam?

In short, Loving Robert Lowell is not without problems. It is, however, a heartfelt recollection of several immensely meaningful months in the author’s life—less the facts as Joe Friday might desire them than the truth of memory, sifted and respun for more than fifty years. As Hochman describes visits to the Actors Studio, rowing in Central Park, hobnobbing with literary friends (she seems not to have known anyone who wasn’t famous), or walking naked about their apartment, she offers perhaps the fullest picture of Lowell in the glamorously seductive phase of his mania, alternately suave and silly but rarely “loutish,” as Ian Hamilton found him to be. For this corrective portrait alone, we must thank Hochman for sharing.