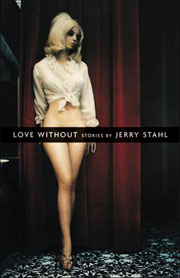 Filled with seemingly cheap thrills that reveal unusual originality and depth, Jerry Stahl’s latest collection of short stories throws the reader into scenes of vulgar eroticism and vulnerable uncertainty. Love Without explores love, of course, but also perversion, drug addiction, and even Dick Cheney’s secret homosexual affairs. Stahl demonstrates the universality of alienation, apathy, and desperate restlessness by approaching these emotions from perspectives as diverse as the straight-laced dentist and the half-dead junkie.

Stahl often leaves crucial details to the reader’s imagination, requiring one to distinguish reality from the characters’ nightmares, fantasies, and delusions. In the second vignette, “Cossack Justice,” recently orphaned Raymond is sent to a boarding school for boys where his roommate introduces him to Smythe, the night watchman, in dimly moonlit stairwell:

As Raymond squirmed, the watchman’s eyes grew huge and then disappeared. He grunted. Raymond tried to break away, but the old man’s hands were in his shoulders like claws.
“Be still," he growled.
The air around him smelled like asphalt, hot tar, impossible to breathe. He brought his large face closer. His lips were moist, white flecked. His breath whistled through his nose, wind in a storm. The sound grew louder and Raymond twisted in his grasp. He cried out, “Gavin!” but the other boy only giggled. . .

Later a counselor tells Raymond’s guardians about the incident. “The adults’ words floated back and forth behind him. ‘. . . traumatic. . . watchman. . . withdrawl.’” This unresolved suspense clarifies the perspective of the traumatized eight-year-old boy; the reader experiences his repressed memories exactly as he does. At other points characters feign ignorance, placing the reader in a position of genuine ignorance.

Another vignette, “L’il Dickens,” serves as comic relief. It chronicles a confused hunter who encounters Dick Cheney at a gun shop in a rural town, where a chat about his Mauser turns into a drug-induced turn toward the homoerotic. The man learns Harry Whittington, the victim of Cheney’s wayward bullet on a quail-hunting trip, was in fact Cheney’s cheating lover. The man is left struggling to forget the Brokeback Neo-Con: “For another beat, I lingered. And then, I left him. The vice president the rest of the nation would never see. The burly, pink-thighed, sneering buffalo of love. I’ll never forget you, Dick. Though, God knows, I’ve been trying.”