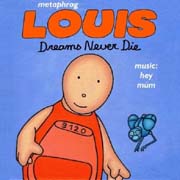 Between its surreal illustrations and trippy vocabulary, Franco-Scottish duo Metaphrog's forays into what it terms "graphic fiction" offer something to savor and wonder at in each caption of its genre-busting works of art. Louis—Dreams Never Die, Metaphrog's latest effort, is wholly its own unique creation, unlike anything which its art or apparent format might suggest it would resemble.

The story follows the wanderings of a potato-shaped protagonist named Louis and his pet bird in their quest to discover what really happened to Louis's Aunt Alison once she stops writing him. While exploring the town of Hamlet and its maze of bright yellow fences, they are relentlessly pursued by Hamlet's police force, the Fly Catchers, and encounter a motley band of underground dwellers who disguise themselves as colorful flowers. But this is really only half of the story, as the plot itself is merely an allegory for the desperate search for meaning and comfort in a society which sometimes seems to conspire against just those things.

The artwork for the book is rendered in dreamy pastels within a patchwork of captions; the bright colors and soft tones render the creepy elements of the story even creepier. The leader of the Fly Catchers looks like an obese Hitler melded from white Play-Doh, and the Fly Catchers themselves bear a striking resemblance to midget Klu Klux Klan members in military regalia. The illustrative style lies somewhere between Marc Brown's Arthur and The Beatles's animated Yellow Submarine, though the true beauty of Metaphrog's work becomes apparent when the reader stops trying to fit it into the boundaries of what has come before.

The book comes with a CD by European bands hey and múm which contains two tracks that serve as a soundtrack of sorts for Dreams Never Die—but unless the listener understands French, the correlation of the lyrics to the story will be lost to most English speakers. The music itself, though, provides a marvelous backdrop for Louis's adventures: at turns both robotic and tropical, somber yet inspiring, it defies categorization in much the same way the book itself does.

Deftly sidestepping the twin perils of a cheery ending that could only be tacked on and an equally dissatisfying cynical one, the book's conclusion offers no easy answers, but neither does it drown the reader in a vision of despair. The final page of Dreams Never Die raises more questions than it answers, but instead of feeling betrayed, the reader is consoled by the universal nature of Louis's journey. Anyone who has felt the pangs of loneliness will relate to this book; it comforts the reader by saying "you are not alone," which is exactly what the best fiction—graphic or not—can do.