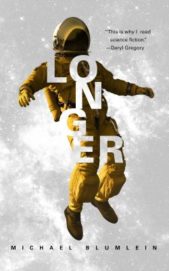 Longer, by the late San Francisco Bay Area writer Michael Blumlein, offers a fantastic journey to both the stars and to places in the heart. An award-winning writer, Blumlein also worked in the medical field, and though there is medical terminology and some SF jargon in Longer, this last work is filled with the wonder many have come to expect from classic science fiction.

Cav and his wife Gunjita work for a large pharmaceutical company and are on assignment in space. They both have “juved,” which gives them the opportunity to grow young again—back to their twenties—but there is a limit to how many times they are allowed to do this. Meanwhile, something very old and alien has been discovered, an extraterrestrial object that just might tell us something about our place in the universe.

The book is a fun read for those who like stories set in space; it is also replete with social themes. Cav and Gunjita’s interracial marriage provides Blumlein an opportunity to explore many subjects, but Longer is not a diatribe about race or class or injustice. Instead it is about love, science, and wonder, which in fact may be a welcome change for some readers. Not being able to journey to the stars is one of the biggest disappointments of modern times, though it is overshadowed by humanity’s continuing propensity for war and misdistribution of wealth and resources—which has kept some contemporary science fiction writers more earthbound than in days past.

Despite its big and classic themes, Longer is relevant and at times even lyrical, as when Blumlein writes, “He stood in the cupola, gazing at the Milky Way, observing in himself the balance between what he saw and what he felt, between the sensation of cold and his perception of the sensation, and in the latter the balance between awe and terror, which shifted as all things shifted, and which he had experienced his whole life when gazing at the stars and the infinity of space.” Sadly there will be no more from this award-winning writer, but there is a lot he has left that will take us to the future.