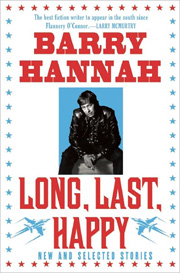 Notwithstanding its Evil Knievel-style dust jacket—meant perhaps to evoke the titillating, slash-and-burn early lifestyle of its author—the real daredevil pyrotechnics, the true daring and attack, of Barry Hannah’s Long, Last, Happy: New and Selected Stories, are its heavily-machined sentences, prose that may be indebted as much to Hemingway’s brevity, clarity, and macho bravado as they are to O’Connor’s grotesqueries, but still sentences that only Hannah could produce. As he said in a speech delivered at Bennington College in 2002, “I write out of a greed for lives and language. A need to listen to the orchestra of the living.”

Reading through Long, Last, Happy, you can’t help but be struck by Hannah’s attentiveness to life as it’s lived by largely unlikeable characters, lively and unlovely—or perhaps lovely because of their liveliness. His fictional world offers readers a panoply of the grotesque, picturesque, and burlesque, a true variety show of shysters, wastrels, ne’er-do-wells, hacks, and failures; hideous schemers and beautiful dreamers; also musicians, soldiers, writers, and academics, not to mention racists and homophobes, each of whose fabulous foibles are incisively rendered in sentences which, without mincing words, make mincemeat of our hypocrisy, dishonesty, malice, violence, and other assorted failings, what Hannah, in “Dragged Fighting from His Tomb,” describes as that “bog and labyrinth” where we are all “overbrained and overemotioned.” It’s the kind of language, rendered as much with and for the eye as with and for the ear, that struck Hannah “as a miracle, a thing the deepest mind adores,” a musical language: an “orchestra of the living” accompanying “memory, the whole lying opera of it.”

Speaking of lies, there is no small number of liars in this collection: the “old liars” of “Water Liars,” who trade tall tales like the one about fishermen reeling in “fifty or more white perch big as small pumpkins,” having used “nuthin” for bait, or the “chronic prevaricator” in “High Water Railers,” whose “lies were so gaudy and wrapped around they might have been a medieval tapestry of what almost or never happened.” The narrator of “Hey, Have You Got a Cig, the Time, the News, My Face?” is a natural-born liar: “There was always a great lie in supposing any life was significant at all, really. And one anointed that lie with a further arrangement into prevarication—that the life had a form and a point.”

Speaking of violence, Long, Last, Happy contains quite the high body count. In “Testimony of Pilot,” a saxophone prodigy’s bandleader is killed in a car wreck; later, when he is well into adulthood, his ex-girlfriend dies in an airplane crash, she and her fellow passengers “all splattered like flesh sparklers over the water just over Cuba.” The story ends with the narrator himself dying on a surgeon’s table. “Coming Close to Donna” ends with a girl getting brained with a tombstone. “Dragged Fighting from His Tomb” opens with the narrator taking “a bullet through the throat” then “overmurder[ing]” a fellow soldier by shooting him four times in the face. The narrator of “Knowing He Was Not My Kind Yet I Followed,” one of Hannah’s many stories set during the Civil War, confesses that although he hates “this murdering business,” he does love the “burning and the looting.” “Behold the Husband in His Perfect Agony” ends with the ultraviolence of a woman being dynamited: “The thing was still alive. It was staggering in the doorway. Its limbs were naked and blackened. Its breasts were scorched black. It was a woman, hair burned away.” Amid all the violence, death, and carnage, Hannah might be describing himself in “Two Things, Dimly, Were Going at Each Other”: “He had been crazy for death these many years, writing about it and studying it in his thick manuscripts. Many, hordes, died in his fictions.” Actually, the protagonist of that story turns out to be a thinly veiled William Burroughs. With all the bullets whizzing past, knives slicing skin, muscle, and tendon, and explosives blasting things to Kingdom Come in Long, Last, Happy, it’s an unlikely weapon, namely “a bowl of Lysol” thrown at a moment of rage, that wreaks the most havoc in the book.

Speaking of sentences, Hannah’s stories are full of stunners that are crafted to conjure a distinct persona, often a crackpot whose scattershot observations shift between the hare-brained and deceptively brainy, at the end of which you can almost hear the requisite rim shot. Some blogorrhea-sufferers, with their swelled heads pricked by all things priapic, will fawn over sentences like “I want to sleep in her uterus with my foot hanging out” (“Love Too Long”); and “She wore a sundress with a drastic cleavage up front; looked like something that hung around New Orleans and kneaded your heart to death with her feet” (“Testimony of Pilot”); and “She’d sunbathed herself so her limbs were brown, and her stomach, and the instinct was to rip off the white underwear and lick, suck, say something terrific into the flesh that you discovered” (“Testimony of Pilot”). They will likely get off on the mythologizing of drunkenness: “The drunkard lifts sobriety into a great public virtue in the smug and snakelike heart. It may be his major service. Thus it seemed when I was drunk, raving with bad attitudes” (“Ride, Fly, Penetrate, Loiter”). As funny as these sentences often are, each one carefully attuned to voice and character, these aren’t the ones that shine most. Hannah’s character descriptions are often wonderfully odd and wittily acerbic. These comic observations whittle down the characters that fall prey to Hannah’s blade. But it’s his eccentric lyricism that consistently satisfies, and which, at times, reaches toward an as-thorough-as-Thoreau perspective, one that may be less enlightened, but is by no means less attentive.

Though the largely amoral characters of Hannah’s early work provoke or even celebrate violence and mayhem, later stories like “Scandale d’Estime” begin to soften that stance. This story also attests to his ability to craft quiet lines, such as “Her eyes blinked pink at the rims when she lifted up, and I was gone for her, out of my depth,” or “This charity and long-suffering had never even nearly come near me before.” The assonantal lilt of those short i-sounds in the former sentence and the latter’s alliterative rush of n’s (“never,” “nearly,” and “near”), not to mention its clever interpolations of “near,” the way “never even” suggests a palindrome, attest to Hannah’s command of the full resources of language. And “Two Things, Dimly, Were Going at Each Other” is a story replete with idyllic reminiscences characterized by their Faulknerian flow:

The rain smelled sweet, rich. Thinking of the golden wheat lapping it up, breadbasket of the world, amber fields of, sun-browned boy with a string of bullheads, home-dried cut cane pole with black cotton line, drilled piece of corncob for a bobber, Prince Albert tin with nightcrawlers in wet leaves for bait.

Here, Hannah uses b-words (“breadbasket,” “-browned, “boy,” “bullheads,” “black,” “bobber,” and “bait”) to serve as anchors in a lyrical passage that might, because of the glissando effect of its inventory, very well slip off the page. And his eliding of “waves of grain” —allowing the reader to fill in the blanks, as it were—is a masterstroke, as it eliminates the cliché while still enjoying all of its resonance.

The final section of Long, Last, Happy, features four new stories that find Hannah in top form. It opens with “Fire Water,” another of his fishing tales; this one features a group of octogenarian women whose idyllic fishing trip is ruined by an arsonist’s act of conflagration. The story exemplifies many of the hallmarks of Hannah’s style: an unhurried, almost gentle rhythm, evocative imagery, and a sultry lyricism evinced in his descriptions of the fire as “running, almost speaking in snaps of twigs mad orange all suddenly” and a steeple “falling into a heart of black and purple as the whole structure went down, wracking, gnashing what teeth were left.”

Following the collection’s final story, “Rangoon Green,” Hannah posits that “writing train[s] our people for logic, grace, and precision of thought,” and these are the very qualities Hannah’s best writing offers. Story after story reveals compact (if usually skewed) patterns of thinking and speaking that are manifested in sentences that dance, that are elegant even when their subjects are inelegant, that are, yes, graceful even as they stab us. Their precise imagery, description, and characterization; their sharp dialogue, biting humor, and malice; their delight in bizarre human behavior; and their rage against human weakness all confirm not only Hannah’s strange predilections, but also his acute perception and insight. In the 2002 talk he gave at Bennington, Hannah opined:

It is often said that a writer is more alive than his peers. But I believe he might also be sleepier than his peers, a sort of narcoleptic who requires constant waking up by his own imaginative work. He is closer to sleep and dream, and his memory is more haunted, thus more precise.

Without question these stories, home to a carnival of misfits and miscreants, are evidence that even in death Barry Hannah’s work still rises above that of many of his still-living peers—and most especially above the work of his many imitators, the pretenders who, in contrast with Hannah’s ideal writer, seem more dead than alive. As Hannah might have put it, these eyes-wide-open stories “sing back to you almost as a disembodied friend.”