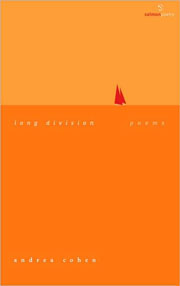 Did you ever wish that you could read other people's thoughts? In a memorable episode of Buffy the Vampire Slayer, Buffy suddenly becomes able to do just that. The problem with this power is that it can't be focused. In a busy high school hallway, Buffy is barraged with dozens of thoughts on dozens of topics. When she hears an urgent cry for help, she can't locate its origin.

Did you ever wish that any subject, concrete or abstract, that captures your attention, however briefly, could be captured in a poem? The poems assembled in Long Division left me with the conviction that Andrea Cohen has this power, and that it is both a blessing and a curse.

Almost any subset of poems in Long Division demonstrates Cohen's range of subject. For example, in one sequence of poems she ponders the travels and manifestations of water ("Underground Stream"), the fate of a bird kept captive in a hotel room by naturalist Alexander Wilson ("Song of the Ivory-Billed Woodpecker"), the positive side for the needle in the haystack ("In a Haystack"), and the way scanning lost collectables in a flea market might change the course of the shopper's interior life ("As Is"). Not surprisingly, Cohen finds the mélange nearly overwhelming:

Tell me, who might I have been
had I not glimpsed that green
forest of bottle, not imagined
an ample spinster in her kitchen,
taking stock, divesting, puzzling
how best to label the miracle
elixir still uncorked: Emerald
vessel, still full, and not for sale.

These are the final lines of "As Is," but for a poet with Cohen's gift, it must require immense control to stop once she starts. When Cohen turns to a topic like "Current Events," she swerves away from the expected meditation on today's headlines and begins to catalog a simpler kind of current event instead:

for the punctual soprano practicing
Don Giovanni off key across the alley,
for the starlings who string their nests

with hair nets, Christmas lights and yo-yo
twine in the hollow rusted portico,
for the cicada that plays

To be fair, in the next lines, Cohen praises "the paper boy who pumps his red bike, / thrilled at the extra burden / of world events," but the poet has no interest in "the news"—it is already at hand.

Cohen is not a poet grounded in a particular place; poem after poem metaphorically cries out, "Don’t fence me in!" But these are also not poems without borders. Cohen can get into a poem like “Accomplice” in a flick of her well-trained eye—"The white underside / of your forearm / startles me"—but she knows not to overstay her welcome and is out of this poem fifteen well-set lines later.

In poem after poem, Cohen becomes her own critic. She knows she can't sit in one place for very long. In "Ferry: Somewhere Between Boston and Yarmouth," the poet loses "a cup of quarters in the slot machine," reflects on how gambling is "choosing how much to lose," then imagines "leaping into the bulging sea" but rejects this ending:

From that titanic Gulf
I saw myself yet aft—
quizzical, windswept, unfinished,
and so swam back.

Long Division opens with an epigraph from Wallace Stevens: "There may always be a time of innocence. There is never a place." In these poems, Cohen responds, "No problem." Anywhere she hangs her voice is home.