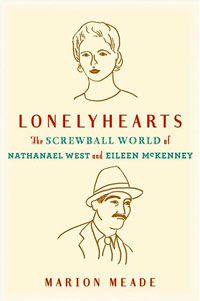 He was carried through the exit to the back street and lifted into a police car. The siren began to scream and at first he thought he was making the noise himself. He felt his lips with his hands. They were clamped tight. He knew then it was the siren. For some reason this made him laugh and he began to imitate the siren as loud as he could.
—Nathanael West, The Day of the Locusts

As biographer Marion Meade makes clear in this study of two individuals destined to die in each other's arms, there was perhaps no more unlikely couple on the earth. Eileen McKenney—the sister to Ruth McKenney, whose series of New Yorker sketches titled “My Sister Eileen” had made her a household figure, and who after her death would become even more known through a long-running Broadway play, two movies, Leonard Bernstein's musical adaptation Wonderful Town, and a television series—was, at least superficially, an innocent from Ohio, brought up in Midwestern normality. The two sisters' plucky determination to "make it" in New York would become almost a template for hundreds of other stories, films, and plays about Midwesterners and others trying to adapt to the big city.

Nathan Weinstein, who transformed himself into the writer Nathanael West, was, on the other hand, born to some wealth in that city, the son of a builder of numerous Harlem and West Side high-rise apartments still standing today. As a child, Nathanael was a shy boy, found most often hiding away to devour Dostoevsky, Tolstoy, and other major novelists. But despite his bookish ways, he skipped years of school, dropping out before graduation. Although he hid out in the New York Public Library in order to read, he later harbored terrible grudges against the place and imagined how he might set that great institution on fire. Although it's clear from Meade's commentary that the boy was far from popular with his peers, and in later years, evidenced by several of his central characters (including the notorious Miss Lonelyhearts), was likely a highly conflicted gay man,1 the young Nathanael frequented whore houses, developing an ongoing battle with gonorrhea.

Indeed, it would be hard to find an individual of more contradictions than West. With ill-fitted body parts betrayed by "congenital hand tremors" which manifested itself in other physical problems—clumsiness, poor coordination, difficulties in using a knife and fork and dressing himself, and an abnormally slow gait—he loved the out-of-doors, taking up, later in his life, bird hunting (particularly doves). Despite his inability to graduate from high school, he illegally entered Tufts University, and when he was dismissed from there, took over another student's identity to attend Brown University, from which he managed to graduate. A dreamer and ne'er-do-well at heart, he nonetheless managed for many years two of the most prestigious of New York's residence hotels. Although his "spidery penmanship . . . lurched between script and print, the 'gaunt caps and lank descenders' wobbling downhill across the page," West was determined to take up writing, and produced four brilliantly bitter satires before his death in 1940. The shy boy later became close friends with a host of notables, including S. J. Perelman (who married his sister Laura), F. Scott Fitzgerald, Dorothy Parker, Bennett Cerf, William Faulkner, John Sanford, and Josephine Herbst. Although he made hardly any money from his books, he lived a pleasant life from screenwriting, seriously devoting himself to Republic Studio's grade-B movies, including It Could Happen to You, Born to Be Wild, Five Came Back, and Let's Make Music.

On the distaff side, the two sisters, at least in their fictions, were well-adapted innocents trying to make a go in the city; but in real life Ruth attempted suicide several times and found living with her stepmother so impossible that she was sent away from home. Although Eileen was portrayed as a slightly empty-headed beauty who had her choice of hundreds of men, she was a good conversationalist with strong political viewpoints, and sexually, she later discovered, was actually frigid.

In short, both of these remarkable figures were not at all what they seemed, each having an inner force that, despite their complex problems, attracted people to them. As one of West's characters in his early fiction The Dream Life of Balso Snell notes: "I'm fed up with poetry and art. Yet what can I do? I need women and because I can't buy or force them, I have to make poems for them." No one could really imagine that the two might get on, but for a few months before their tragic deaths, they seemed to live a delirious fantasy that contradicted everything in West's art and life. In some senses both of them were "imitating sirens," Eileen pretending much of her life to be a great attraction for the male sex, and Nathanael shrieking about the injustices of American life through his writing.

Rereading all of West's fictions in light of Meade's amiable yet revealing biography, one might see him as kin to another great American satirist, Flannery O'Connor. Despite West's secular personality, there is something in his surreal-like works that shares with O'Connor's apocryphal visions of life. Both grew up apart from the worlds in which they lived, both were "strange birds” and obsessed with birds—West to kill them, O’Connor to raise them—despite their ability to make renowned friends. Both died at the height of their powers, after writing just four works. The characters in their oeuvres include a wide range of fanatics, preachers, unhappy and dangerous homosexuals, and just plain desperate people, none of whom are loveable, but who represent an impossible desire to discover love and meaning. That such things are unattainable for social outsiders is inevitable given these authors’ powerfully bleak visions.

Well known as an outrageously poor driver, West took Eileen on a short hunting trip just before Christmas in 1940 and on December 22 crashed into a car near El Centro, California, killing them both—along with Eileen's two-year-old daughter, sitting in the backseat. Four nights later, the play My Sister Eileen opened at New York City's Biltmore Theater, with Shirley Booth, Jo Ann Sayers, Richard Quine, and Morris Carnovsky; it would run for 864 performances. Although ignored in his lifetime, West's books, particularly Miss Lonelyhearts and The Day of the Locusts, eventually became American classics.

1 One of West's favorite childhood pastimes was to watch gay couples having sex in Central Park's "Brambles," then leap down with shrieks at the moment of orgasm.