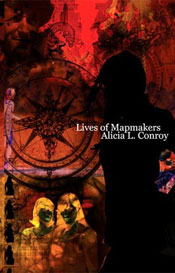 Alicia Conroy’s collection Lives of Mapmakers uses a beautifully written ensemble of narrative identities to reach the book’s underlying themes of temporality, uncertainty, and loss. Though the voice Conroy uses is rarely her own, her message is consistent: nothing will last forever. Her characters come to this realization in various ways, learning to chart their lives according to the instability of place and time. In “The Sun Sails Broad Reach,” Conroy writes that as she continues to move through life, she is “learning to pack lightly for the trip.”

The strongest story in the collection is “The Nameless Season,” which envisions an environmental fluke that eliminates spring. Two teenage sisters watch as buds fall from the trees, the grass refuses to green, and the sun grows hotter and hotter. The emotional effects of the change are as great the environmental ones—as the younger of the sisters emptily hopes for a future that is no longer possible, the older changes her name and screams at bushes that refuse to bloom. Conroy’s predictions about life after significant climate change are chilling. If global warming permanently alters conditions on earth, the generation who remembers what it was like before will surely “with gnawings of envy and nostalgia…recognize the way we played favorites, our cult of summer.” Fortunately for Conroy’s characters, spring brings the world to life again six years after it went away. As a result, their longing for the past resurrects itself in gratitude for the options still allowed by the future.

Other highlights include the title story, in which a map collector dreams of acquiring a work by the sixteenth-century mapmaker Gerard Mercator. Mercator’s story interweaves with the collector’s own, connecting a thread of history between the time of explorers who wanted to know the whole world and the time of explorers who just want a piece for themselves. “All This Talking about God” tackles the unshakable sadness of a woman whose eight-month-old baby has died. Her friends and co-workers tell her it’s part of God’s plan, but she can’t see how anyone could plan for grief. “Right now all I’ve got is milk and tears, blood and sweat,” she says. “Animal things washing through me, things that don’t bear reckoning.” She begins to watch Buddhist nuns sandpaint a mandala they will eventually destroy. Their meditation on its temporality helps her realize that her pain, though it will not always be as strong, is inherently a part of her—“that’s what animals do…we cry out, we endure, and we suffer.”

Conroy’s descriptions spiral rhythmically around the images they project so uniformly throughout this collection that the drastic shifts in perspective, time, and place between the stories call undue attention to the fact that they’ve been written by the same person. In many cases, Conroy’s real-world distance from her topics (riparian mermaids, the lives of female migrant workers) seems to push her toward the themes she works with best and away from those she might explore from a truly altered viewpoint. In a passage that could easily describe her writing style, Conroy writes “I am trying to weave the current skein and the broken threads of my past into a plain and useful blanket.” Lives of Mapmakers is hardly plain. Its gorgeous and consistent style calls for a personal, genuine, and much longer story to match.