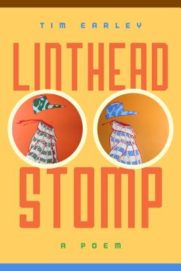 Tim Earley’s Linthead Stomp is a book that writhes and seethes like a briar of barbed wire. The title evokes the idea of the old south, impoverished and limping along, proud of the hard life. But the book is no friend of the past. It rails against the pigheaded ways of small town Appalachia, its shortsighted religion and ignorance, yet it elegizes dead friends and family while capturing the beauty of a dying realm. It is a record of events found on the blank pages of a family Bible. The reader must prepare themselves for an arduous and unforgiving journey.

Earley’s use of mountain speech mixed with pop-culture language creates a long poem of many modes. The melange of language is apparent from the beginning: “AC ON/WINDOWS UP that’s the way we like to,” is a reference to a controversial song by the ’90s rap group, 2 Live Crew. This injection of pop culture is backed by the use of abbreviated Internet lingo—amirite, yr—contrasted with strikingly beautiful and distraught lines:

Lady deer lady meadow lady spring. Domestic sphere SPRUCED like no one has lived here like no one lives. Pappy more machine than tool. Tag. Game. Fill river with corpse light. I crossed out the fishes with rapture wishes.

The identity crisis within this book rushes the reader along in its tsunami with a strung-out and seemingly clairvoyant speaker who will tell lucid stories from his world then vomit volumes of mystical prose. While the book lacks a traditional overall narrative, small tales and longer accounts repeatedly break through to the surface. Here’s what reads like an obscene rhyme you’d find kids singing at recess:

Let me tell you about Awnie Zucker.

She named her son Motherfucker.

He started dropping goddamns by the age of six

And told his teacher to suck his dick.

Awnie toted him to Lake Patsy and chained his leg

To a concrete block and threw him in.

He was too mean to drown.

But the turtles ended up eating him after awhile.

Sections like this are what pass for breaks in Linthead Stomp; their sardonic tone gives the reader a small respite from the large blocks of prose found elsewhere. Half of the fun is surviving the onslaught and the other is experiencing Earley’s ability to break language down into its most primitive state. Some portions bypass the conscious mind and head straight for the atavistic reptile brain: “I insist on vassalage for I am an idea of whiteness ratified by spiritus animus-cherry bombs vitamixi battery-powered probal violences orgasm a scoch of feeling in the throat.” Strings of charged words allow the speaker to channel a rawness that would be hampered and civilized by syntax. Earley doesn’t just use words for their literal meaning, but also for the psychological impact. The effect is visceral, as the reader feels beaten and bloodied along with the language:

These sections feel like indoctrination programs that are there to re-educate the reader, with or without their consent. In other passages, Earley weaves the telling of a story with ritualistic callbacks. One section has the speaker recounting the death of a mentally ill cousin after admission to a hospital:

I will part thy brain with a pious word I will do an exceptional job of dilating the bucolic of nothingness. She drove the three hours down, picked him up, and took him to the mental hospital in Morganton. I will parlay rumors of depravity into the shadow of my advantage. He resisted admission. Pissant poems reliquary of blood. He was held down and beaten by orderlies and placed into an isolation room.

The story ends with the death of the cousin and the lack of willingness on part of the authorities to investigate; when Earley injects the speaker’s commentary, the violence and neglect it interacts with transcends the basic revolt the reader experiences. The speaker is only telling a story and interpreting it, much like a pastor interprets and comments on scripture—the story becomes a myth.

Unabashedly blending contemporary and experimental poetry, Linthead Stomp doesn’t care one lick for the reader’s well-being. It’s wonderfully full of life, like a road-side carcass that’s belligerent enough to forget that it died. This book purposefully holds itself aloof until the end:

I do not speak for my people.

I do not speak for people.

While the language is caustic, it’s heartfelt. Earley doesn’t hold back and is completely comfortable in his craft. In this world, the reader suffers along with the speaker because there are no walls or windows to shield them.