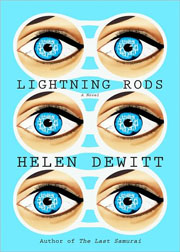 Given the sundry occupations of the last couple months, the timing of Helen DeWitt’s wicked new satire of corporate America probably could not have been better. As some other reviews of the book have noted, satire has not been a favored form in contemporary American fiction in recent years, but DeWitt illustrates its power, political edge, and intellectual charm in a brisk story that the Wall Street occupiers would do well to keep in stock in their free library.

Lightning Rods is the story of Joe—not Joe Six-Pack exactly, more like Joe Business Class. After spectacular failures as both an encyclopedia salesman and a vacuum salesman, Joe embarks on the path of classic American entrepreneurship. “Classic” in all ways except one: the inspiration for Joe’s particular widget comes from his own perverse and highly fastidious sexual fantasies. After some precursory research and development, he is soon marketing and selling to corporate America a product that is basically a glorified glory hole. For a sizable fee Joe will bring in specially trained women, which he calls Lightning Rods, to work in the company and surreptitiously draw away overabundant male sexual energy. They do this by waiting for a signal to enter the women’s bathroom, undressing from the waist down, and climbing onto a contraption that moves their lower and rearmost portion through a sliding wall into the men’s bathroom. Meanwhile, selected men in the company (high-sellers with libidos so overactive they constantly threaten to entangle their company in sexual harassment lawsuits) enter the men’s disabled stall; the wall slides back; and the high-seller, in a manner the novel repeatedly compares to going to the bathroom, takes care of his special needs.

Satire and comedy traditionally have the advantage of allowing an author to develop ridiculous premises to absurd lengths, and DeWitt follows the logic of her premise all the way. She winks at her reader here and there but mostly adopts a mock earnest tone, which is a shrewd move. Her many cliché-ridden passages justifying the Lightning Rods are argued with such force and conviction, the reader begins to envision certain real-world businesses giving the green light to such a project. The result is a book that manages to be titillating and breezy even as it hides a clusterbomb of social commentary under its glittering, aphoristic surface.

DeWitt’s precise understanding of satirical metaphor accounts for much of the book’s deeper pleasures. In a satire of this sort, too much complexity of character or plot would end up muddling the clarity of the attack, so the ideas need to provide the majority of the depth. Superficially the book’s target is sexism in the workplace, as well as the sexism of the general corporate culture, but the story makes it clear that DeWitt thinks there’s no higher ground in other social circles. The exploitive, amoral logic so omnipresent at the first company to install Lightning Rods turns out to have distinct parallels in the worlds of government, law enforcement, and the legal community. There are also hints that the world of publishing is on the hook, since a number of her clichés about business sound like they could come out of a how-to guide for writing a novel or screenplay: “Making mistakes is how we learn. If you’re not making any mistakes, chances are you’re not taking enough risks.”

But if DeWitt’s satire aims to savage more than corporate culture, broadening out to the rest of society, does that also mean it is watering itself down? To rephrase a debate that is taking place right now among many Wall Street occupiers: if she is attacking everything, is she in essence attacking nothing?

This is where Lightning Rods rewards a closer reading, and where DeWitt reveals her true target. The book intentionally beats a few phrases into the ground, including variations on the phrase “he looked at it this way” or “the way to look at it is like this,” which effectively illustrate the way subjectivity acts as an abdication of responsibility for many people in business and beyond. But the most-repeated notion the characters rely on is summed up thusly: “Any salesman knows that you have to deal with people the way they are. Not how you’d like them to be.”

This is, of course, the favored mantra of all capitalist economies. People are naturally immoral, greedy and self-interested. As much as we might wish that fact were different, sigh, it’s just what is, what always has been, and what always will be. DeWitt’s tale reveals deep and facile tautology in such thinking. Joe has some problems getting Lightning Rods off the ground but it is not for lack of women willing to do the work for financial remuneration; rather, his main challenge is convincing management to install the service and the high-sellers to actually use it. Upper management justifies their acquiescence by using the mantra: high-powered and money-driven men are what they are, sigh. But the high-sellers, although they are indeed oversexed sexist pigs, initially have serious reservations about using the service. What pushes them past their inhibitions is not “how they are” but an array of non-natural factors. Some of them remember that Joe, in his introductory presentation, tossed a few scientific-sounding “facts” their way, and these—all of which speak to supposedly natural urges—allow them to justify themselves. But what really convinces them to try the product is simply that the whole contraption is there, it’s been approved, they’re expected to use it, and so they consider it out of their hands. As one user thinks of it, “There’s no point in needlessly alienating someone who has gotten the go-ahead from higher up.” In short, management has signed off because these men are what they are, but the men enact what they are only because management has signed off.

If this is a remedial concept in many circles, it is still an important one to articulate often and loudly. People, according to most thought systems besides the fantasy of capitalism, find themselves already embedded in a network of specific power relations. Their “nature” is a product of ideological awareness, often specifically the awareness about exactly those power relations. Every human subject makes myriad calculations before they act, but one thing these calculations have no problem doing is incorporating the idea of “naturalness” into their equations. Only a different ideology, and/or different power relations, can hope to condition the subject to act differently.

Sadly, a lot of highly praised contemporary literature continues to offer characters who are motivated by what they supposedly are, not by what relations they are in. There are many deft jokes in DeWitt’s book, from the utter lack of disabled employees in these companies (hence the ease with which everyone repurposes the disabled bathroom stalls) to the Lightning Rod employee who teaches herself to read Proust in the original while “on duty,” but at its core the book is refreshing for a simple but important viewpoint it shares with the Wall Street occupiers: people are the way they are because of capitalism, not the other way around.