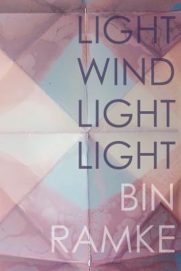 Bin Ramke’s poem “The World Vibrates Variously” offers a microcosmic philosophy in both its sonorous syllables and essayistic unspooling of idea. Here are the closing gestures, having first touched on matter and energy, birdsong and traffic, art and personal perspective:

The story cannot be told in profane language
in a dirty world reflecting itself
in every puddle every sky
bounding and bouncing light back
at us (Observing sea, sky, and stars,
I sought to indicate their plastic function
through a multiplicity of
crossing verticals and horizontals.)

back and below
where the lines converge
as the layers linger
humming along.

The poetic layers Ramke builds create spare rooms, secret passageways, and holographic catacombs, weaving them into a sacred geometry among language’s denotative, connotative, textural, and etymological melodies. Image and metaphor, yes; intellectual rigor and wandering, yes; conversations with personal, literary, scientific, philosophical, and spiritual touchstones, yes. These are poems of the mind and for the mind, investigating and honoring realms of thought and associational activity in process and on the page. (Ramke is known for this; his 2009 New and Selected Poems carries the title Theory of Mind.) Fuller, though, and even more accurate, would be to name his oeuvre a constellation of forcefields which evoke and animate forces. A sensualist, language student, and miner of airs, waters, places, Ramke continues to be one of our most overtly engaged, persistent, transcendent, high-profile contemporary poet of physics and metaphysics, furthering the work of American Moderns such as Stevens, Eliot, and Roethke.

Most poets ponder love and time, life and death, nature and human nature. While this is true of Ramke as well, his relentless questioning into both subjective and objective realities creates “lines and layers” where consciousness meets quantum and cosmic patterns. His true subjects are the edges of things/conditions/insights, and how they nest within each other like Russian dolls and overlap like Venn diagrams. Where the Jungian multiplicity of selves and the mellifluous syllable scintillate, Ramke attends by capturing the moment.

Light Wind Light Light, Ramke’s thirteenth volume, happily continues these key signatures. While the epicenter here, from a poet of a certain age, treats reflection—both in the physical, light-creating-images-through-dimension sense, and in the metaphysical, soul-contemplating-itself sense—it’s too simple to say that this is a book about memory. The title (and was there ever a more gorgeous title?) gives us thematic cues: he leaves out solid earth and rushing waters, as well as light’s more passionate incarnation, fire, to reflect more ethereal forces. The title also morphs into resonant possibilities—noun? verb? adjective? long “i” or short?—and suggests a spectrum of other mutable, multifaceted meanings within the covers.

Fans of the middle-period books may miss the expansive, side-scripted, everything-but-the-kitchen-sink methodology, but Ramke’s digressions and parentheticals still abound: here they’re embedded in the text and also peppered as epigraphs, intersecting voices, and chapter intros, honoring his maximalist mind even within poems that feel more vertical, compact, and direct, arcing back to the style of his earliest books. Socrates shows up, as does Newton, Plato, Ingmar Bergman, Louise Bourgeois, and others. Repeating words and concepts include light, wind, winding, past/passed, beginning/end, boundaries, numbers, morning/mourning, and murmuring. Ramke gives us the flickering movements of existence, the artifacts and contexts of passage, as in “Windfarm Wind”:

We do not see wind we see
what was windblown wind formed.
Birds do die but did live.

The poet-mystic knows the quantum, the cosmic, the strings, the elements, the directions, the snake, and the spider. The poet-mystic knows that the void offers an invitation to create anew, “Isolating Splendor” as one of his titles puts it, in order to “Witness (The Modern Sublime)” as he says in another—in reflection, in melancholy, in contentment, in awe. This poet-mystic knows, and sings as he shows.