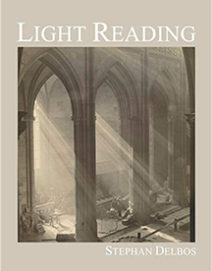 “Light reading” is an odd little phrase that stands in for myriad literary desires, typically ones that involves easy digestion. When the world is too much, we occasionally want our free time spent with books that do not require too much of us. In an era of collusion investigations, climate change denial, and rising nationalism, it is hard to deny ourselves such escapism.

Stephan Delbos, a poet based in Prague, manages a clever feat with his new collection, Light Reading—he crafts an easily accessible opening with self-aware poems that lure the reader in and gain their trust for the more challenging poems that follow. The collection is set up in three parts: The first title section mostly contains extremely short poems that hinge on final information discovered via the title, which is printed after the body text, springing the reader back to the top again upon completion. A majority of the time, these please with satisfying humor or astute observation. For example, the entirety of the poem “Fight/Flight” is: “they came for me I was gone.” This style impresses best when the micro-form directly augments the content at hand. “Fifty-Year Flood” reads:

The second section, “Bagatelles for Typewriter,” is the longest and most ambitious section, and like most attempts at innovation, it yields mixed results. According to the poet’s notes, a bagatelle is “a French term meaning a trifle. It is most often associated with short classical music compositions.” With the reader’s only clue that the poems are trifles, one is made to wade through a vast collage of literary references and sharply specific images that are all sussed out in the poet’s notes at the end. Without the notes; they can be difficult to navigate; nonetheless, there are jewels to be found. The last four zigzagged gorgeous lines for “Bagatelle for Györgi Ligeti, Eternal Light & Honeycomb” are:

The third and final section, “Arrangements,” contains poems that are all catalogs or lists of ten, but lists of poems themselves. After a few predictably executed poems within this template, things start to get pleasantly weird. Instead of lines like “1. A poem in terza rima / 2. A poem of 18 lines,” the external world creeps in with lines like “7. A parquet jigsaw / 8. Childhood sleepovers and Micro Machines.” These imagistic cracks in the expected flow of the list format become narratives that readers can hang their own experiences on, connective tissues around which the speaker builds the poetics posited therein. In other words, the most successful poems in this third section become more than just the sum of their parts.

The same could be said for most of what works in this challenging collection. Delbos approaches his craft without any semblance of fear, and seems to expect that same thing of his readers. How refreshing.