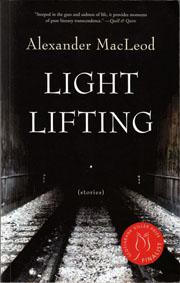 The Canada found in Alexander MacLeod’s impressive debut story collection, Light Lifting, is full of anxiety and obsession: a land where man masters the ins and outs of minivan combustion engines, parents fixate on the origin of lice, and the powerless struggle to overcome childhood fears. Across seven wide-ranging tales, lives are saved, others are lost, and redemption, both physical and spiritual, is occasionally found. Nevertheless, the world harnessed by MacLeod is also one that bursts with wonder and nostalgia, and the author lets his subjects shine with both raw power and supple beauty throughout. Each story in Light Lifting is a true marvel—there are no fillers here—and with every passing page MacLeod firmly establishes himself as a bright new talent in literary fiction.

“Miracle Mile,” which chronicles two elite runners as they vie for a spot on the national track team, kicks the collection off with a muscular bang:

This was the day after Mike Tyson bit off Evander Holyfield’s ear. You remember that. It was a moment in history—not like Kennedy or the planes flying into the World Trade Center—not up to that level. This was something lower, more like Ben Johnson, back when his eyes were that thick, yellow colour and he tested positive in Seoul after breaking the world record in the hundred.

These lines are spoken by Mikey, the story’s narrator. In a comfortable, conversational voice, he lulls the reader into the trenches, offering up detailed portraits of an athlete’s life. The particularity of these facets—be they motel rooms, train tunnels, or rituals—is what makes “Miracle Mile” so incredibly engaging. From the start, MacLeod is committed to immersing his audience into the environments and mindsets of his characters. Yet, unlike many of his contemporaries, he is able to accomplish this encapsulation without sacrificing fluidity. Not once does “Miracle Mile” drag. Instead, it unfolds with such skill and proficiency that one forgets on occasion that the story is a work of fiction, and that MacLeod didn’t conduct interviews with a series of men and women and transcribe their lives onto paper.

This sense of engagement is a thread that keeps Light Lifting consistently admirable. Whether describing sunburns (“Like grease coming through waxed paper”) or a mysterious neighborhood house that “seemed like one of those doomed store locations that can’t support any kind of business”, MacLeod maintains a firm grasp on his audience’s attention. Of course, on occasion these vivid details might be a bit too much—in “The Loop,” for example, a character mentions looking at shelves and walls of family photographs, and instead of leaving anything to the reader’s imagination, he lists the reasons they are “all pretty much the same”—but these quibbles are minor at best. More often than not, MacLeod is spot on in his craft and confident in his talent.

Though the “light lifting” mentioned in the collection’s title story is a reference to the daily toll that comes from laying brick for a living, it can also be used to describe the craft of short fiction. “Any kid can pick up a hundred pounds if they only have to do it one or two times,” a nameless narrator says. “But it’s the light lifting that does the real damage. Maybe it’s just thirty pounds and it starts off slow, but it stays with you all day and then it hangs around in your arms and your legs even after you leave.” Like this small load, a timeless short story should stick and hang like a phantom weight and be carried by the reader for weeks, months, even years. With Light Lifting, Alexander MacLeod has given us all a new set of figurative bricks to haul around in our memories.