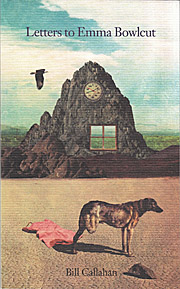 Sandwiched between a surrealistic dog and a bronze boxer on trap rock, Bill Callahan’s Letters to Emma Bowlcut mails seventy-two messages to a distant lover with humor and elegance. One half of an apparently two-sided correspondence, Letters also portrays a writer of a unique sensibility, wry and gentle at once.

The romantic scaffold of Letters teases the busybody in us enough to hone an appetite for some jangly, oblique prose. As a love affair, Letters is a lopsided disaster: Emma’s lover fills in only the slightest biographical details, and the few indications of any mutual correspondence (e.g., “I’m sorry to read about your skin disease”; “That’s a lot of activity you described”) are filled with a regular, risible vacancy that insists the book lives elsewhere.

The hacks with which Letters doles out its romantic tit-for-tat simplify the elements of infatuation to a negligible place, where the epistle writer’s acute ramblings take hold of the story. Amid a stock tale of attachment and alienation, there are moments of lovely adoration, as much for experience as for distant love: “after, when I am flayed out on the couch, is the only time I see the one star visible through the window so small and high.” In the end, Emma’s lover apparently disappears into a professional vortex, too consumed with his own health and preoccupations to carry on with love.

Callahan’s love poems are a scaffold for episodic punch lines: a blunt barrage of two- or three-liners that come out delightfully dull and undisguised. The letters tumble like words before a lull in conversation: insightful enough to linger, and internal enough to leave detached. If Letters does little in the way of narrative or characters, it does everything in achieving a voice of creative memory. Never important, the letters are sometimes comically dreamy (“When I got up I noticed several complete outfits of clothes in piles on my floor. As if a group of men had dropped them and gone out into the storm naked”), but almost always tonally flat.

Fans of Callahan’s music, recorded under both his own name and the band moniker Smog, will recognize this tone as an echo of the off-tune baritone and heavy lyrics that edit his audience to scale. Through fourteen albums, Callahan has perfected lyrical punctuations arresting enough to transport a listener from hummable ditty to philosophical musing. Always benefiting from some tension between melody and discord, he applies repetition and startling word choices to disrupt a traditional uniformity of meaning and songs, as in this verse from “From the Rivers to the Ocean”:

Not a song, of course, Letters abandons repetition almost entirely, but the startling word choices abound, and make for finely edged lines even without musical accompaniment. Callahan revives common song themes—birds, bodies in water—where the voice seems most at home, as when Emma’s lover wrestles with his ex, Robin: “She just wanted to race and would dart above and below me like a beam of light while I flabbily gasped and flabbily thrashed. Once, I placed my foot squarely on her chest and pushed. But I went nowhere. She wooshed back in the water’s slowness.” And everywhere is Callahan’s punch-line format, familiar in songs such as “Feather by Feather”—

—but the punches feel new in Letters, perhaps ending more certainly, without musical extension and tonal influence to open room for interpretation.

Though its voice is honed and recognizable, Letters in some ways creates a compelling foil for the rock. During the eight years in which Letters was composed and edited, Callahan’s music has grown to include more layered production and varieties of song. His distinct baritone, more and more, comes out somewhere in the middle, recessed in a textural instrumentation. Perhaps Letters offers an upfront place for that voice again—less dissolved by melody, though still beautifully wandering.

The book’s quick jabs suggest heavily edited notes on writing, and build to two surprising final letters that blend a novel continuity with the wry grace that makes Letters a pleasure. Here, Callahan lingers on scenes longer, surveying the medical hum and confusion of elderly housing, where beds look “like something that folds cars in a junkyard.” Soon after this scene, the book is finished, but it has introduced a prose stylist worthy of attention. Callahan apparently has only begun to knock out a narrative voice that will no doubt pummel the next time around.