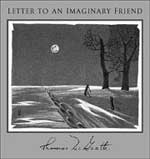 It's been nearly a half century since the long, single file of actors, writers, artists, and other usual suspects—poet Thomas McGrath among them—answered the call to testify before the McCarthy House Subcommittee on Un-American Activities. What happened during those inquisitions is old record: some of those invited danced, some stonewalled, some let loose against the disgraceful procedure of it all. And some—too many—lost their livelihoods and good names after refusing to play by the rules. In 1953 the committee blacklisted thirty-six-year-old McGrath, who in short order got booted from his teaching job at Los Angeles State College, as much, it seems, for his allegiance to that “grand old bitch” the Muse as to socialist causes.

In a kind of loose-ends exile over the next few years, and in the off hours between odd labor jobs, McGrath composed the first of what would become four parts of his epic masterwork, Letter to an Imaginary Friend. Parts One and Two were put into print by Swallow Press in 1962, Parts Three and Four by Copper Canyon Press a full twenty-three years later, in 1985. Now Copper Canyon has put the quartet finally together into one full, righted, and definitive edition, coming as close to doing justice to McGrath's tsunamic imagination as possible by making use of drafts, notes, and other sources not previously available.

Much that's already been said of McGrath's opus in its several incarnations bears repeating. Critics hailed the first installment as a “tremendous odyssey of sense and spirit,” the second as evidence that lightning does strike twice, and the two taken together as the great revolutionary poem of the American heartland. Sam Hamill introduces this new 400-pages-plus Letter as, above all else, “a grand work of memory and recovery,” full of lyrical intensity and cinematic in scope.

The poem moves like some kind of treasure-laden train from station to station in a dreamed-to-life terrain—from McGrath's native North Dakota to the golden coast of California to Portugal and beyond. As it snags on time warps and event horizons that skew the chronology of Letter's pseudo-autobiographical narrative, the poem memorializes for the record lives and landscapes wiped out by grubbing religions (especially Catholicism) and the second world war, and damns the aftermath: what he sees as the American turn away from compassion and toward the every-dog-for-himself panic state.

McGrath once remarked in an interview that he was born into a time when he felt compelled to denounce much through his writing. That may be true, but not a complaint: one would be hard-pressed to find a more musical polemic than Letter in the English language. Here are the shipyards and dark barns, the wildcat strikes and cameo appearances of courage, the graveyard shifts and grimy rigs-all delivered in elegant diatribe against the users and profiteers that grind the working-class body to ash and spirit to dust. McGrath, bottom line, is damned good at damning:

Bandits . . . murderers in medals holding hands in the
catch-as-catch-can dark
With the carking, harked-back-to, marked-down virgins
of the stark little towns
Where, once, their paper histories dropped on the
thin lawns
And rocking porches of the dead-eye dons and the
homegrown dream-daddies
Now stiff with their war-won monies.

This is captivating but not easy reading. Taking his cue from Einstein's dictum, “Make it as simple as possible, but no simpler!”, McGrath sets himself to complicated work that doesn't take well to quick description. Letter is a slippery missive on the page: its dictions switch registers from stanza to stanza or even mid-line, from that of an erudite scholar to a bully-pulpit unionizer to a sort of addled medium babbling glossalalia in rhyme. Its vernacular language is shot through with a litany of rare words—elecampane quislings chippying around the pelagic and dandiacal catafalques—that recommend keeping a good dictionary in reach. Its cast of characters is immense, including figures from McGrath's childhood, his later mentors, fictional interlocutors on the order of Berryman's Mr. Bones, a role call of esteemed provocateurs (Che Guevara, Big Bill Haywood), and a steady supply of hot-thighed madonnas from the writer's “great kingdom of Fuck.” Its irregular but usually six-beat lines spill out across the page, bouncing off both margins, and bring to mind and ear the form and cadence of Whitman, some Ginsberg, some Bible, some intoxicated elocution of long gone Emerald Islanders.

Best of all, Letter to an Imaginary Friend licks its fingers and burps at the table. Polite it is not—and the better for it when McGrath turns from his populist vitriol to what may be his most abiding talent: that of bestowing praise—grace, even—on the common, the unruly, the inconsolable, those McGrath chose to side and sing with and for whom “the world is too much but not enough with us.”