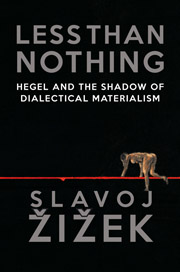 GWF Hegel (1770-1831), the pre-eminent German idealist, changed political discourse by staking the claim that “antimonies” or inconsistencies were persistent to any thesis, thus a system would be perpetually besieged by antithesis, and subject to transition into a synthesis. In his churning 1000-page new tome, Slovenian philosopher and social critic Slavoj Žižek tells us that “what happened after Hegel” was that systems lost their ability to “condense” and incorporate the multiplicities of society, “so the excess became ‘unbound’, a threat to the representative system in all its guises.” In short, no power structure can contain everything. There would always be ample room for revolution.

Žižek, a self-described “communist in a qualified sense,” draws upon the legacy of Hegel, along with the work of Sigmund Freud, French psychoanalyst Jacques Lacan and philosopher Alain Badiou. His ambition is to enhance discourse on social, political, and scientific deadlocks by showing that inconsistencies are inherent in most positions. To Žižek, inconsistencies are not solely categories or arguments, but inscribed in nature (e.g. the collapse of the wave function into a particle). Žižek calls these inconsistencies a “parallax,” the “name for the most elementary split/diffraction.” His 2006 work The Parallax View (MIT Press) is an excellent exploration of this theme.

Žižek draws a distinction between the “symbolic necessity that regulates our lives” and the Real that defies expression and resists incorporation into the order, expounding upon the Lacanian formulation of the objet a, a “little piece of reality” that compels us to incorporate it into the symbolic order (he puts a glyph of a naked woman on the book’s dust jacket as an example of objet a). For Žižek, the Real resists incorporation into the symbolic order, and thus remains a surplus and a compulsion. The objet a stands in for a “hole in the symbolic order”—in Hegelian terms “the night of the world,” or in Freudian terms the “death drive.” But this all means that theobjet a is a “signifier” of the Real which must be destroyed (e.g., Christ) in order for the symbolic order to emerge. Things don’t get to be symbolically important until they stand in for something missing.

The objet a embodies compulsion to approach the real. It also undoes our logic and sense of normalcy. “In a love letter,” Žižek says, “the very failure of the writer to formulate his declaration in a clear and effective way, his vacillations, the letter’s fragmentary style, and so on, can in themselves be proof (perhaps the necessary and only reliable proof) that the love he professes is authentic.” Or so as Simone Weil says, the lack holds our attention: “where there is nothing, read that I love you.”

“Less than Nothing” is Žižek’s expression for the lack in the symbolic order, the surplus that resists symbolization. He argues that approaching the Real is necessary to renew. “Hegel is also aware that, in order to prevent its own death by habituation . . . every bourgeois society needs to be shattered from time to time by war,” he tells us. Žižek seeks to progress upon Hegel by incorporating the objet a into Hegelian theory. The lack is essential to a system: “the radically New emerges only through pure repetition.”

Žižek sees the time of Hegel, Fitche, Shelling, and Kant as contributing to a critical Rupture in historical thought proper. This development was later taken to a new level of interpretation in the birth of modernism. Yet he is critical of thinkers (such as Michel Foucault) who adhere to a historical thought process and seek to mediate historical and social influences through deconstruction (a “synchronic” analysis). Žižek insists the French “post-structuralists” and “deconstructivists” placed too much emphasis on the burden of the constructs, and not enough on the subject’s engagement and achievement through them. Instead, he expounds a dialectical approach. To Žižek, relationships are essential to ensure our authenticity, our freedom; they ensure we don’t devolve into our own notions and fantasies. While modernism implored “the outcome of its own activity,” postmodernism, relativism, and mobilism get it all wrong, he tells us, since they miss out on solidarity.

Not surprisingly, Žižek is also critical of what he calls “New Age Obscurantism,” or any system which implies a harmony or unity of opposites. “Its falsity lies in the fact that it frees the universal notion of modernity of its antagonism,” he says. “‘Postmodernism’ is rather the name for a regression, for a refusal to follow the consequences of the modernist break.” For Žižek, the inscription of the parallax and the Real implies that nature is never resolved in harmony. The wheel of life never stops, and even after we think we’ve mastered something, it can all come apart. “Eppur si muove” or “and yet it moves,” he says. The Real persists, eternally, beyond the symbolic order.

In the political sphere, Žižek argues that compromise cannot exist as “a unity of opposites” but rather implies a failure of commitments. He argues that in a deadlocked two-party system, one party is simply a “symptom” of the other’s intransigence, its effort at “specialness,” its failure at solidarity. He therefore deplores strategies via centrism (Bill Clinton’s “third way”), which obscure delusions in the current capitalist system. Instead, he argues for a radical alternative outside the current system—one which requires the current system’s complete downfall prior to renewal.

To illustrate this point, Žižek looks to recent European history. If Communism failed in its commitments, Žižek postulates, fascism failed in its revolution. Of the Holocaust, he says, the Jews, by becoming the “chosen people,” had to “suffer the reaction to the fact that they excluded themselves from organic communal life and thereby abandoned themselves to a rootless, alienated existence.” The symptoms are apparent, as “anti-Semitic discourse constructs the figure of the Jew as a phantom-like entity to be found nowhere in reality, and then uses this very gap, between the ‘conceptual Jew’ and the actually existing Jews as the ultimate argument for anti-Semitism.”

Symptoms of previously failed states, therefore, are apparent to Žižek in “late capitalism,” with its rabble of unemployed peoples and its isolated elites; these display failed integration into the organic whole and betray failed solidarity. He is concerned with the modern gap between the notional and actual (the intellectual arguments for capitalism and the endemic problems on Wall Street; the abstraction of capital, its digitalization, and its function of “money begetting more money”) as a serious threat to the social sphere. Yet he sees the Occupy Movement (which he attended last fall) as close to being a reaction to a notion of capitalism rather than a genuine third way, its own alternative stand-for-yourself organization. He urges its proponents to build an intellectual edifice to claim a moral ground.

We need each other, Žižek claims, not an enemy. He notes that Hegel’s fascination was the “primacy of self-contradiction over the eternal obstacle” such that the “struggling subject needs the figure of the enemy to sustain the illusion of its own consistency . . . so much so that his (eventual) victory amounts to his own defeat or disintegration.”

Indeed, Žižek has built his reputation as a confrontational intellectual and conveys violent allusions in his writing: “crazy, tasteless even, as it may sound, the problem with Hitler was that he was ‘not violent enough’ . . . his violence was not ‘essential’ enough . . .” Žižek gets in trouble with sentences like this because they are so easy to misinterpret, but reading through the entirety of the tome, his message is clear: a real revolution is a commitment to solidarity, not a reaction to some notion of people in your community. If the Nazis wanted change, they should have focused their libido (violence) on their own purposes, not reacted to projections like “the Jews.”

So Žižek wants Occupy Wall Street to grow up and do something of the same. Yet his direction, and this book, offers no real vision of alternatives to the current economic model in the West. He borrows a lead from Hegel and channels the “Owl of Minerva,” a mythical owl who “only takes flight at night.” In other words, philosophy is only retrospective, not prescriptive, and we can only see the errors of “late capitalism” in retrospect. Žižek doesn’t let his readers know what parts of the system he sees as functional, but rather exhorts us to engage in “radical emancipatory politics” (whatever that means).

Less than Nothing is a master work that is eminently readable, chock full of cinematic allusions and graphic jokes; it strives for a product like Hegel, where “each passage” does not necessarily follow a linear progression but “is a moment of creative invention.” The book is raw with vital force, surplus even, and Žižek goes at it with a death drive all his own. And yet he leaves obvious unturned questions. What went wrong with Stalinism and Leninism and why? Could a model of strictly employee-owned corporations work? What we’re left with is a surging, fragmentary work, which is, perhaps, the only reliable proof of its authenticity.