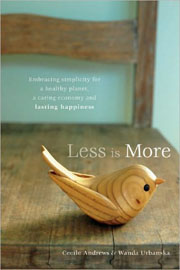 Given what inequality does to a society, and particularly how it heightens competitive consumption, it looks not only as if the two are complementary, but also that governments may be unable to make big enough cuts in carbon emissions without also reducing inequality. — Richard Wilkinson and Kate Pickett, from The Spirit Level: Why Greater Equality Makes Societies Stronger, 2009

“Getting and spending,” Wordsworth wrote two centuries ago, “we lay waste our powers.” He could not have foreseen the ways in which technological advancement would both facilitate materialism and exacerbate loneliness, such that our relationship with the interface of our cell phones is more intimate than our relationship with the very people to whom we furiously text and “tweet.” Too often luddites use “technology” as pharmakon for the lack of social cohesion in our communities. But cell phones are only the latest manifestation of the market’s centuries-old ability to prey on social insecurities. What’s really askew, that is, is getting and spending.

Or so the authors featured in Less is More assert. And taken as a whole, they make a solid case, citing quantitative evidence from the fields of psychology, sociology, and social epidemiology to posit essential critiques of earning, socialization, and the social safety net. The question is not whether these issues are pressing, or the proposed solutions necessary, but whether a general population caught on the gerbil wheel of economic meltdown could ever acquire the leisure and presence of mind within which to consider such ideas, much less mobilize to effect legislative change.

“We elected Barack Obama,” editor Cecile Andrews sallies, as a way of demonstrating that, beleaguered as we are, Americans are capable of positive change. But late in 2010, with the passage of health care legislation lacking even a paltry “public option,” the nation engaged in two wars, and our drones buzzing into Pakistani airspace like perverse, C-4-bloated mosquitoes, Andrews’s willingness to evoke the 2008 election looks less like optimism than naiveté.

Over and over, the authors illustrate how unchecked market forces rob us of both time and peace of mind, undermine our relationships, and threaten the environment. “The rich person in this country,” writes Andrews, “doesn’t have the longevity the middle-class person has in Norway, a country committed to a small wealth gap. . . . Citizens need to know that we work longer than any developed nation and that happiness is declining.”

Rebecca Kneale Gould lists the side effects of the North American “time famine” as “overconsumption, the unraveling of family life, environmental degradation and a sharp decline in human health.” “Renewable energies like solar, wind and geothermal,” adds David Wann, “can meet the needs of a moderate, no-waste economy, but not a careless, hyper-consumptive economy.” According to Tim Kasser, “the ecological footprint of an individual . . . increases steadily in proportion to number of hours worked per week, and rises dramatically for those working more than 35 hours per week.” Without a doubt, we’re in a pickle.

Yet we lack precisely the conditions in which we might change our conditions. Most essentially, we have no true alternative to full-time employment. In the words of Dr. Suzanne Schweikert, “our desire to keep our health insurance benefits . . . ties us to jobs that are bad for our health.” How do you mobilize a population that’s worked half to death? Andrews recommends local “Simplicity Conversation Circles,” which seems rather like recommending pixie dust to a Stage IV cancer patient.

The policy recommendations of David Wann and Juliet Schor are more substantial, though far less plausible. “Consumer cultures like ours,” writes Wann, “urgently need value-directed policies that reward efficiency and durability and penalize overconsumption.” Schor concurs: “the key to achieving a more sustainable path for consumption is to translate productivity growth into shorter hours of work instead of more income.” Top three in Wann’s list: tax carbon more heavily than income, guarantee equal per-hour pay for part-time work, and implement universal healthcare. One can almost hear the laughter such proposals would evoke on the floor of the post-midterm Senate.

And yet, every week, however busy, we empty the compost and take out the recycling. We savor our precious free time. We strain to connect with friends. If Less is More fails in realism or radicalism, read it anyway. Read it out of your own grave need. Then continue to do what you can.