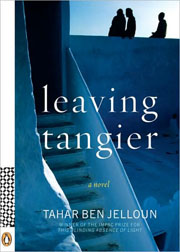 The Moroccan worlds Tahar Ben Jelloun creates in this compelling novel—one in the title city and another in the lives and minds of a variety of Moroccan emigrants to Spain—are so well drawn that when an overt analogy to Mexican-US immigration appears, it’s startling. That situation suddenly seems far away, because Ben Jelloun makes the Mediterranean feel so familiar, its people and their problems very much like those at home, despite the cultural and religious differences that tend to loom as large in Western minds as the minarets in news footage. Ben Jelloun’s characters and their concerns are plain and understandable, whether they’re sympathetic characters or not. Even a minor one like the recruiter for a terrorist cell—the savagery of whose activities is in no way softened or justified in this book—is shown to be human, with a facial tic and a history of studying literature at the Sorbonne, before embracing a fundamentalist form of his faith for reasons sociological, economic, and political, as well as spiritual.

The psychological and the historical, too, are as important as the human in this far-reaching novel. The story centers on one Azel and his mother, sister, and three lovers: two women and a wealthy older Spanish man. “Azel” is short for Azz el Arab, literally “the pride, the glory of the Arabs!” as he informs another character, admitting in almost the same breath, “Unfortunately, the Arab world of today is a shambles. So am I.” College-educated but unemployed at the book’s start, soon victimized by both a kingpin of the Tangier underworld and corrupt police, Azel dreams to the point of obsession about leaving the country—so when Miguel López offers him a job in his Barcelona art gallery that would qualify him for a visa, Azel accepts, even though the strings attached are fairly evident. “Poverty is a curse,” he says in one of the long, lyrical monologues Ben Jelloun’s characters deliver in order to reveal to us their anguish, their souls, and insights on their own issues, as well as those of other characters, the region, and the world. “It roots you to the spot, pins you down on a wobbly chair and you’re not allowed to stand up, to go see if the sky is more pleasant somewhere else.”

Azel and his sister Kenza are allowed to cross the eight and a half miles of sea between Morocco and Spain—legitimately, unlike a cousin who’s perished in an illegal attempt to burn up the straits. The people they meet in Spain and the changes they go through there, together and alone, keep us turning the pages and satisfy our desire for fully dimensional lives. Some of the characters do seem constructed sociologically, as if to represent a cross section of this world: they range from Azel’s illiterate mother and deceased cement-plant worker father, to party girls and criminals, to Azel’s fourteen-year-old neighbor Malika, whose hands and health are ruined in the freezing shrimp-shelling plant where she works—which, like a character itself, in one of the book’s many informative digressions on up-to-the-minute current events, is placed in a globalized economic context of exploitative outsourcing. But even the minor characters are sharply etched and emotionally involving—as with Malika’s “dream [that] had the perfume of childhood,” her “ladder . . . to a sky that was always blue.”

The main characters—Azel, Kenza, Miguel, and a handful of others—are of a meticulously delineated psychological complexity. Even at its smoothest Azel and Miguel’s relationship, for example, might be described as dysfunctional codependence, but even after its roughest stretches, both men express as much care and concern about each other as any two other characters in this novel. The effect is a sense that what holds Ben Jelloun’s far-flung and often desperate world together—as in the world we live in, at its best—is the connections between people.

At times the full characterizations can get a bit tedious or jarring. This book is not for the homophobic and maybe not for the homosexual, either, in its frank depictions of a variety of ungentle sexual practices and even less gentle attitudes toward them. And there’s some stereotypical behavior and dialogue by and about characters when they’re defined by gender or sexual preference. In 1975, Ben Jelloun’s doctoral thesis was in social psychiatry—on “affective and sexual problems of North African workers in France,” according to his web site—and in places this 2005 novel reads as if he’s still using some of that early research.

But more often, discussions of sex lead to cultural insight. One of the most incisive comes from Sihan, the woman Azel loves best, when he admits to her the full nature of his relationship with his benefactor Miguel. “Don’t get upset,” she tells him; “sexuality’s not the only thing in life. To me, you’re Azel first of all.” Compare this to the preoccupation with sexual preference and gender identity that over the last forty years has come to dominate our own public discourse in law, religion, and politics, as well as in popular culture. An effect of these frank descriptions is to de-emphasize sex by demystifying it and putting it in context: in Ben Jelloun’s book, it’s simply a human behavior among many others.

His literary technique is not always subtle, either. Narrative pacing is deftly but quickly handled in forty short chapters, often named after the character whose thread they follow. Imagery and language, however, are precise and stirring throughout. “So it turns out that I had to leave Morocco to finally fall in love, to experience that marvelous state that makes you so light, and so present,” Kenza says about a Turk she meets in Spain, where Miguel has brought her as his wife of convenience after converting to Islam (with, in another deepening of his character, surprising sincerity). Such interior states and character motivations are often explained to us omnisciently, as if the Western creative-writing workshop dictum “Show, don’t tell” is inverted in the East, or in soul-baring spills of dialogue to another character.

This might result in some impatient page-counting and rolled eyes, and it does provoke at least one howler, when Ben Jelloun writes of a minor character given to unprovoked shouting and commotions in the streets: “Nobody knew why he had these fits of anger, but a keen observer would easily have seen that he was psychologically unstable.” Such awkwardness may be a function of the text’s translation from the French, Ben Jelloun’s language of choice. But it’s rarely that intrusive, and the translation, by the noted Linda Coverdale, is fluid and lucid. Most often, thanks to the lively character developments and plot turns, our eyes are on the people in this world.

That’s because Tahar Ben Jelloun knows what he’s doing: the author of books of poetry and nonfiction as well as fiction, he won the prestigious Prix Goncourt for his 1987 novel La nuit sacrée in his adoptive (since 1971) France. And in 2004, he received both the IMPAC Dublin Literary Award and the Cross of the Grand Officer of the Legion d’Honneur for the novel This Blinding Absence of Light. But he’s no pedant, as is evident in ten pages of conversationally informative notes at the end of Leaving Tangier, offered to amplify names, terms, customs, regional histories, literary and Koranic references, and other Arabic allusions in this rich and illuminating text.

The book’s world is fictional, of course, and sometimes even fanciful. The opening evokes a longing for escape so strong it’s been given a name by the thwarted loungers at Tangier’s Café Hafa, where after dark “the twinkling lights of Spain . . . appear” on the horizon; occasional later passages qualify as magical realism. But it’s our twenty-first century world, all right. The Café Hafa exists, according to the first note, and details like a scanner in a Tangier doctor’s office and a Barcelona street hustler’s “cell phones with fiddled SIM cards” further anchor us in the present. So do dissections of issues from globalization to individual identity (sexual, ethnic, and otherwise) to the historical cycles of racism. Some of these are expressed in characters’ monologues or thoughts, others with devices like a journal Miguel’s father kept when he fled to Morocco from Franco’s regime in Spain—an earlier generation’s inversion of the Arab diaspora that’s made Islam Europe’s fastest-growing religion, with a million adherents in Spain and up to almost ten percent of France’s total population.

Before addressing the social, economic, and political consequences of such new heterogeneity, Europe’s secular and/or Christian majorities have had to adjust to the very idea of otherness. We Americans do too, and those who realize that isolationism is a valid concept only for polygamous sects and kidnappers will welcome this book as an excellent way to open the mind and the heart.