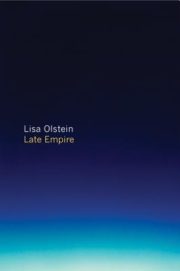 In Late Empire, Lisa Olstein’s fourth poetry collection, the poet throws herself into a disturbing discussion about 21st-century realities, pinpointing, questioning, and exhorting. It’s a riveting picture of the micro, day-to-day busy-ness against the macro, overshadowing struggle of existential survival. “We bring the world to bed with us, / its weather, its moving maps, / and its wars.” The writing is inclusive; we are all in the same bunker, facing constant trauma. This is well portrayed in “Night People”:

Tonight
we are all Malaysia Airlines
as we like to say, as we have learned
to say, as it somehow comforts us
to say. Tonight, this week, for as long as
we can bear it or until something
pulls us away we are all one hundred
and fifty-three Chinese nationals and
six Australians and three
Americans . . .

Structurally, the collection is divided into five sections, each written in a different form: sonnets, prose poems, poems written in tercets based on Gaston Bachelard’s The Poetics of Space, and lyrical one-stanza poems that open and close the book. The atmosphere intensifies from section to section. A mystery figure, Whistle, enters the prose poems and becomes Olstein’s sounding board.

With repetition and short sharp sentences in the poem “The Disaster,” Olstein brings home the effect of round-the-clock reporting moving from catastrophe to catastrophe: “The disaster is not / our affair. The disaster takes care / of everything.” Additionally, Olstein is a master of poetic syntax. Her words paint fresh, beautiful images, as in “Glitter-spilled stars / velvet the gaze,” or “The foot / of the lake meets the mouth of the river.” Her sensitive lens focuses on our most basic dreams and fears: “Mark, what if / by chance I met my true love when I was / too young to know to keep him?”

Olstein also vents her frustration at our neglect of the earth. “Monday / it’s a report on the impossible future of bananas. Tuesday it’s / the story of limes held hostage by cartels. Both still appear / on our shelves, but we don’t know for how long.” “A Poetics of Space” deals with our connection with our surroundings, including the “intimate data” of shells and walnuts, garrets and rooms. Perhaps “I Want to Save This Whale” is the poet at her most ecologically passionate:

She’s tangled in nets and lines
and there’s only one way to
get her out, she tells us
with her bathtub-sized eyes
one at a time because we
have to swim around to see.

Lisa Olstein’s perceptive voice cuts through our “safe house” of complacency. She calls on us—and on the empire to which we belong—to take note of what’s going on before it’s too late.