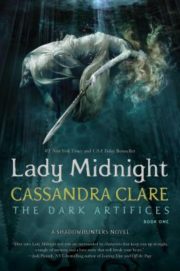 Lady Midnight, first in a new series of Shadowhunters novels by Cassandra Clare, takes everything exciting about her previous novels and amplifies it. It has a great cast, an enthralling plot, witty humor, romance, mystery, and plot twists that will have the reader gasping out loud. One part murder mystery, one part magic, one part romance. And it doesn’t stop there—this is a book that will make the reader ask questions. What does it mean to love someone so completely that you yourself are thrown to the wayside? How do you move on past love? And, most importantly, what are you willing to sacrifice for those you love?

Lady Midnight features three main protagonists. Emma Carstairs, the central character, is a witty, sarcastic, seventeen-year-old girl hell-bent on solving her parents’ murder from five years prior. She is accompanied by her friends Cristina Mendoza Rosales, a reserved girl running from Mexico City and her past, and Julian Blackthorn, Emma’s Parabatti (a magically-induced platonic soulmate) who is struggling with raising his four younger siblings, the loss of his father and older siblings, and falling in love with the one girl he can legally never have. When they finally find a lead, and a string of murders across Los Angeles, they’re given a week to find the murderer.

Clare populates the novel with incredibly strong characters, from the three main protagonists to the hugely diverse cast around them. Julian’s siblings, the institute’s tutor, and the magical beings in the book all have unique voices and backgrounds. Most importantly, the entire cast of characters is fleshed out in compelling and meaningful ways. The many identities, whether they be bisexual, Latina, or autistic, are never reduced to mere caricatures; each aspect of the characters is shown as deliberate, important, and real.

The connections that these characters feel, all the different kinds of love, create a powerful story, not just of magic and murder, but of family, revenge, and sacrifice. These people matter, and their love is real. And it’s never portrayed as easy, but it means all the more for it. We see heartbreaking self-sacrifice even between children and their family, as when Julian reflects: “It didn’t matter if anyone loved him. He was twelve. He was old enough . . . But the others still needed someone to kiss them good night, ward off the nightmares, bandage scraped knees, and sooth hurt feelings. Someone to teach them how to grow up.”

There are few YA series that put so much emphasis on love and unity between such a unique and widely varied cast, especially ones that aren’t conventional love stories. This novel shines with its focus on all forms of love, “Eros, Philia, Agape” as they say in the novel. Even when it focuses on the romantic and uses familiar and overused tropes, there’s so much else that’s fresh and unique that readers can forgive these moments. Only time (and the next novel in the series) will tell if this forgiveness will pay off.