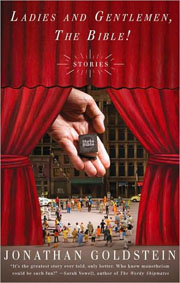 Call it the second coming: the Bible is back. From Slate editor David Plotz’s blogs on the topic, to the success of Marilynne Robinson’s religious novels, the books some believe to be written by God are being rewritten by everybody else. But literary fascination with the Bible is nothing new. Most nineteenth-century writers, religious or not, reverently read the King James Version, particularly the Book of Psalms; as recently as 2007, critic James Wood has labeled these verses among the greatest works of poetry in the English language. Regardless of its hot or not status, Jonathan Goldstein joins the holy hullabaloo by focusing on what the good book most lacks: humor.

More than a modernization, Goldstein’s stories satirize and estrange, and yet remain clearly recognizable as the stories we all know, or thought we did. In fact, to the religious zealot some of these tales may seem obstinate. Joseph is jealous of his son Jesus. Adam is an idiot. Moses is a grimacing pedant. David is a jokester. Samson wants to be an angel because they can “kick ass in the name of peace.” Though these tales josh, however, they also examine with utmost honesty. The many heart-drawn details—such as David recognizing the birth of Absalom as “one of the few occasions in which [he] believed his heart had not stabbed his back,” or Cain’s final realization that after his punishment he no longer desires anything, and in a case of poetic justice has become like Abel—convert plain sardonicism into something less didactic and more profound.

“King David,” the longest story in the collection, likewise begins with mockery but leads to real emotion. Goldstein portrays David as a kid who wants to be funny at any cost; when he takes down Goliath it comes as the result of a joke —“laugh-out-loud funny.” As absurd as this might sound, it is convincing. Hoping to please everyone, David resembles in many ways a comedian courting an audience. In part of the David story, David is married to Saul´s daughter, Michal, a woman he can’t make laugh, who finds him bothersome rather than charismatic, which in turn leads to his tumultuous affair with Bathsheba and Absalom’s tragic patriarchal revolt. David concludes: “God, because he has always loved and supported me, will take me up to Heaven where I will sit around for thousands and thousands of years. Then a million years. And will keep going. Then one day I will go before God and beg him to kill me . . . . And I will say, ‘With all due respect, I don’t think you get it. I’m sick of all this. I’m full. I’ve had enough.’”

Certainly we have left the cushy realm of parody. In fact, Goldstein’s humor and hyperbole often reveal new ways of understanding that can be jarring. For example, Noah’s divinity comes with an old-school work ethic as well as abusive behavior toward his sons, who help him in his daily toil as a contractor. Strikingly similar to the God that chooses him as his earthly servant, Noah calls his sons “good-for-nothing[s],” and feels as confident in his decisions as God might. His sons, however, are not so sure of his plan. When it begins to rain, as Noah and his sons wait on the ark with two of every kind, Ham hears the condemned human race “banging at the outside walls . . . Then there were more hands. Pounding. Punching. Scratching.” He asks his father if they can empty some of the animal cages to let people in, but Noah once again scolds him and calls him a dummy for disobeying God. The sons of Noah generally are left out of the flood story or converted into symbols of do-and-don’t piety, but in Goldstein’s hands they are as human as perhaps they were to the Bible’s first audience.

“Samson and Delilah,” a story still shedding its hippie interpretation of forbidden love, in Goldstein’s hands reads more like a Hulk comic book. An enamored Samson practices confessing his love by wrapping his arms around a tree trunk until it snaps. He tries to impress Delilah by performing feats of strength in the market. His father, “an intellectual who referred to himself as a ‘man of peace,’” disapproves of Samson’s belligerent muscle-flexing, which leaves Samson dreaming of killing Philistines despite his honest intentions to be a pacifist. In the end, Samson is duped by his wife, and God tells him, “You have spent your life making an ass of yourself . . . but you have done so in a most interesting way.” Despite Delilah’s hatred of him, Samson’s last wish is to feel her touch again.

Over the past few years, Goldstein has been reading his biblical fragments on NPR´s This American Life, as well as on his own CBC radio show WireTap, which generated the buzz that sent this collection to print. If you have already heard Goldstein on the radio, you will have trouble not hearing his pregnant pauses and omnisciently playful tone when reading this book.

Just as the text it is based on, Ladies and Gentlemen, the Bible! takes place in a small world where everyone is either related or neighbors, so much that they are bound to each other. The greatest difference between the original and Goldstein’s zany interpretations are the laughs, as David categorizes them: “laughter at your own expense, laughter at the expense of others, laughter at the human predicament, and laugher at small animals falling off tables.” Life in the Bible, often hardscrabble or tragically cut short, hardly provokes a smile, let alone a laugh. That’s exactly why many of these humorous protagonists come to sobering moments of anagnorisis, as when Joseph thinks just before the birth of Jesus, “For the first time in a long time, it felt like things were going to be okay.” The book’s real punch line seems to be that the Bible can still pack a punch, even for the weak of faith.