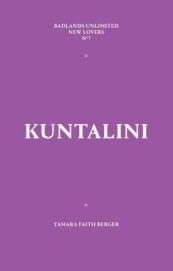 Kuntalini, Tamara Faith Berger’s short yoga-based pornographic novel, is published by the Badlands Unlimited New Lover series, an homage to Olympia Press’s Traveller’s Companion books, which were designed to slip transgressive literature past customs inspectors. Having no border to cross, I brought my copy to the community dental clinic. I hoped maybe I’d perk up an otherwise grim stint in the waiting room.

I put Kuntalini under my thigh as I got drilled. On my left, the technician’s breasts briefly rested on my shoulder as she spread my cheeks with her lavender-purple nitrile glove-clad fingers. On my right, the masked dentist injected Novocain into the inside of my lip with a six-inch stainless steel syringe, saying, “I’m going to rough up the rim of your cavity.”

Yoo-hoo, Kuntalini’s concupiscent young protagonist, is not numb. She sure as hell feels it. She finds yoga class fantastically arousing. A third eye or a cosmic portal or something opens up in her anus thanks to her instructor’s firm guidance, fingers, and tongue, and this propels her on a sex-touristic romp as her mind and organs expand and the universe becomes infinitely fuckable.

Yoo-hoo, still stunned from yogic ass humping, makes her loutish boyfriend late for brunch at an outdoor cafe with his death metal bandmates. In a haze of shame, lust, and pot smoke, she slips under the table to blow one of them. In subsequent chapters she reels in holy ecstasy from a brothel on fire to a cave inhabited by a yogi sex wizard who smells like fish.

I learned much of what I know about yoga from this very book, so I would be delighted to discover that it is based in fact, and that the orgasmic, spiritualized journey Yoo-hoo stumbles upon is an attainable goal, like getting your black belt. Fictitious as it may be, Berger’s prose is exuberant and gushy and knowing; it’s playful with the self-serious Namaste-speak that makes the mat-posturers so insufferable, yet it seems genuine in its appreciation for ecstatic transformation. “All I was, was ass.” That’s a good mantra, right?