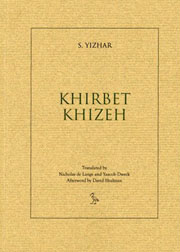 The Jews are a people cast by history as the world’s victims. In Khirbet Khizeh, however, they become the perpetrators of the same crimes that shaped their—our—history for the last two thousand years. The author, S. Yizhar—pen name of writer, professor, and Israeli legislator Yizhar Smilansky—has crafted a work of great importance. It is Art, to be sure, of a high order, but it is also a profound social document, one that a Palestinian journalist called “a sign that the Israeli army had a conscience.” What is written here is precisely that; moreover, it is conscience in crisis. Khirbet Khizeh, named for the small village where it is set, is a stirring homage to the land of Israel and a damning reflection of the birth of that nation.

In many ways, this sober, slender novella resembles Erich Maria Remarque’s All Quiet on the Western Front. Remarque’s young men, like those in Khirbet Khizeh, have raced blithely off to war in what can best be termed a nationalist carelessness. We are party to the same restless energy of youth, the sense of camaraderie and anxiety—these are young men, after all. But whereas the horror of All Quiet on the Western Front is in its scale, the sheer numbers of bodies, and in the violence done by young bodies to other young bodies, Yizhar’s novel trumps Remarque’s in the closeness of the conflict. We are far from the trenches here, far from battlefields; we are in villages, among the children, the elderly, the women, and the innocent. And what we’re seeing is a new kind of horror—an atrocity born of nationalism and entitlement, of anger and contempt.

So much Jewish literature focuses on the Jewish intellect, or on life in the shtetl, or on the American Jewish experience, that to see the modern Israeli in his violent infancy is a shock. We have, in the United States, been subjected to a persistent image of the Israeli as a homesteading hero, defending his God-given land from a ragged horde of stateless Arabs strapped with explosives. Here, in Khirbet Khizeh, we see the Jews as aggressors: contemptuous, self-serving, and violent. The Israelis are subject to the same flaws and the same cold brutality as any other ethnic group, any other oppressor. These are Jews as you’ve never seen us and this is Jewish literature as never before.
In his 2007 essay collection Hold Everything Dear, John Berger ruminates in several essays on the Palestinian problem. (Let’s pause for a moment and acknowledge the language there, the similarity to the Nazi’s “Jewish Problem” and their “Final Solution” to the “Jewish Question.”) One essay in particular is perfect and painful: In “Undefeated Despair,” viewable here, Berger describes “the stance of undefeated despair” that characterizes the Palestinian people. He writes poignantly of their “Despair without fear, without resignation, without a sense of defeat.” In Khirbet Khizeh, we see that stance as it was first conceived, at gunpoint. Yizhar writes:

Then we saw a woman who was walking in a group of three or four other women. She was holding the hand of a child about seven years old. There was something special about her. She seemed stern, self controlled, austere in her sorrow. Tears, which hardly seemed to be her own, rolled down her cheeks. And the child too was sobbing a kind of stiff-lipped “what-have-you-done-to-us.” It suddenly seemed as if she were the only one who knew exactly what was happening. So much so that I felt ashamed in her presence and lowered my eyes. It was as though there were an outcry in their gait, a kind of sullen accusation: Damn you.

Yizhar had found in Khirbet Khizeh what Berger found in a more recent generation, the despair and energy that drive the Palestinian people to this day. What he also finds is the casual brutality of the Israeli act. The global psyche of the Jewish people is derived from the experience of Diaspora; that has been, excuse the phrase, our cross to bear. What Yizhar reveals is the horrifying parallel between the age-old Jewish situation and the one now forced upon the Palestinians. He writes:

I had never been in the Diaspora—I said to myself—I had never known what it was like . . . What, in fact, had we perpetrated here today?

Through the internal crisis of a young man at war, through the grotesque transformation of the oppressed to oppressors—and through the skill of translators Nicholas de Lange and Yaacob Dweck—Yizhar has delivered his readers back to Palestine, back to the Nakba, the catastrophe for the Palestinian people that was the birth of the Jewish state, 1948. Yizhar’s book could only have come from a Jew, an Israeli, and a veteran of the War for Independence. It is a courageous effort, a paean to the land and to all that the Israelis fought for. It is also, however, an elegy to all that the Palestinians have lost and a book that must be read.