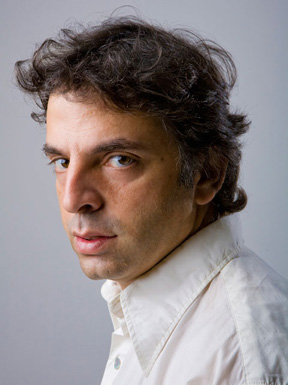 Israeli author Etgar Keret is one of the biggest stars of the Israeli literature, unambiguously the don of the under-50 set. Best known for his short stories, he also writes (and directs) films. His latest short story collection, Suddenly, A Knock At the Door (Farrar, Straus, and Giroux, $14) showcases Keret’s bizarre mise-en-scènes, but shows a newfound calm in his thematic approach. I recently corresponded with the author over email, discussing his translation relationship with Nathan Englander, his foray into film, and the new, chilled-out feel of his recent work.

Courtney Becks: In the writing world, we hear that short stories don't work, commercially—which you've obviously proven wrong. Did you get the same don't-do-short-stories advice? Do you feel like it's "your genre?" Or do you have a novel you're waiting to spring on the world?

Etgar Keret: All my writing-life people kept telling me that I should stop writing short stories and start writing novels: my agent, my Israeli publisher, my foreign ones, my bank manager—they all felt and keep feeling that I'm doing something wrong here. But for me taking a pragmatic decision when it comes to art is almost an oxymoron. The reason I first picked up a pen and wrote a story had nothing pragmatic in it. Making up characters and places and plots, unlike fixing your plumbing or doing dishes, is anything but practical or rational. I write what needs to be written the way that seems genuinely right. If what comes out of it are stories, then it is my vocation to believe in them and in the fact that they'll interest people and maybe affect their lives. 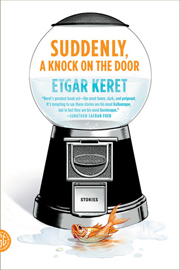 CB: I noticed I was laughing a lot more readingSuddenly, A Knock At the Door. I also noticed that loneliness seemed to be much more of a concern. A lot of people are also saying it's more compassionate—would you go along with that? How would you characterize the change in your writing since, let's say, The Bus Driver Who Wanted to Be God?

EK: I'm not sure it is more compassionate but it is, for sure, slightly less angry. Life keeps being a beautiful and frustrating experience, but in this collection, I feel, I'm a little more grateful for it. Life is one heck of an invention. It is better than the iPhone 4S and Coke Zero combined.

CB: Miriam Shlesinger is still working on translations of your work into English. Can you tell me what the process of translation is like? I especially wonder what it’s like to work with Nathan Englander.

EK: I'm lucky to have three translators who are also my friends. Working with Miriam and Sondra [Silverston] is different than working with Nathan. Nathan is a true storyteller and when he translates a story, he can, when he is getting excited, invent a character or color a wall or two in the protagonist's home in a different color. I usually keep those changes in the translations because they are almost always good ones.

CB: You're married to Shira Geffen, with whom you made the Palme-d’Or-winning film Jellyfish, and you've also collaborated with an artist to produce a graphic novel. What is your collaboration process like? How do you make collaboration efficient and fulfilling for the creative parties involved?

EK: My first and biggest love was always fiction writing. But it is a very lonely pastime. The amazing thing about an artistic collaboration is that it is as intense and intimate as a romantic one. Sometimes even more so. When you work on a graphic novel or a film with people you've been together through a lot and you've exposed your secrets and weaker sides to each other. As a monogamous creature, I feel sometimes that it fills up a function that affairs have in married people's life. And collaborating with your wife is amazing because you are doing something together with a person you truly love and know and discover things about her in that process which you have never had discovered on other circumstances.

CB: I've heard that you were working on a screenplay for a section of Jerusalem, I Love You. Can you tell me about the projects you're working on now?

EK: My father died recently and right now I'm not working on much. The Jerusalem, I Love Youscreenplay is based on a yet unpublished story of mine about a couple who find themselves breaking up during a visit to Yad Va Shem in Jerusalem. The weird relationship between their personal suffering and discontent in a place dedicated to the unimaginable pain and suffering of others is something I found really interesting.

CB: I'm interested to know what you're reading and what films you're watching now. What Israeli writers would you recommend for those of us interested in Israeli culture?

EK: Since my father's death I didn't read or see movies, but before that I've read Englander's amazing short story collection and had seen the Iranian film A Separation, which I really liked. I've also seen the beautiful and moving Israeli film Footnote.

There are too many great Israeli writers for me to recommend, so I'll stick to the slightly less known ones: Yoel Hoffman, who is one of my favorite writers in the world; Orly Castel-Bloom, a funny and shocking contemporary Israeli writer; the late Yaakov Shabtai, whose short fiction I simply adore; as well as the yet untranslated Gadi Taub and Sami Berdugo.

Enjoy this clip of Ira Glass reading the title story of Etgar Keret's Suddenly, A Knock on the Door, courtesy of Macmillan Audio!