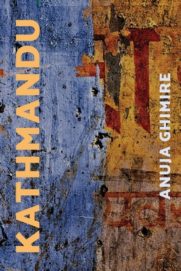 by Carlos A. Pittella

If you think Anuja Ghimire’s Kathmandu will transport you to Nepal, it will—but it will do so as an interrogation of home and the languages we use to define it, and the journey will be equal parts amazement and awareness. The opening poem recalls the 1991 assassination of Indian politician Rajiv Gandhi from the perspective of a young Nepali speaker:

As my mother bent to tuck me to bed
the night the woman blew up Rajiv,
I searched the pleats of her sari
for the shrapnel of fairy tales

Addressing tragic events in Indo-Nepalese history, the first four pieces in this book show the awakening of a poet when the meaning of home is shattered. Out of the “shrapnel of fairy tales,” the poet seeks to remake home, leaving the country of her birth; the taxi-ride to the airport is “The first flight” titling the fifth poem: “the taxi skidded and bounced, with it, my heart // my mother’s sank with each turbulence.”

Kathmandu soon arrives in the U.S. In “Saffron,” we find the poet dancing, balancing the lightness of exploring a new country with the weight of carrying an ancient culture that goes unnoticed to Western eyes:

This poem unearths inner life where xenophobia hides it: in immigrants. Here, poetry has a whole layer of mudras (the hand gestures that tell stories in several Eastern dance traditions). Literally, there is art inside of Wal-Mart, if only we open our eyes to the tales told by the hands doing the shelving.

Later, the speaker is visiting Nepal when the horrifying 2015 earthquake shakes the land, as recounted in the poem “God, five-years-old, saves my life, 2072 B.S.” (another title that functions as a poetic line). B.S. stands for the lunar calendar Bikram Sambat, reminding us that there are multiple ways to tell time. Age, strength, and the very soil become relative: “my daughter announced she was God / as Earth turned into tides.”

One of the last poems questions who owns the language to define “home,” from the very title:

A young woman says “I want to speak English like you”

Suddenly the reader spirals in time, witnessing the learning of two alphabets at once: “the circular egg, police stick, monkey’s tail, and demon’s moustache क / that I learned to write dreaming / the broken triangle with a tummy stitch A, A, A that I wake up mumbling.” These woven alphabets form a powerline, electrocuting with questions any xenophobic violence that touches it: when the foreigner sings in your tongue, what does it teach you about yourself? First, your language is not just yours. Ghimire makes it into her home, and a better home for us too.